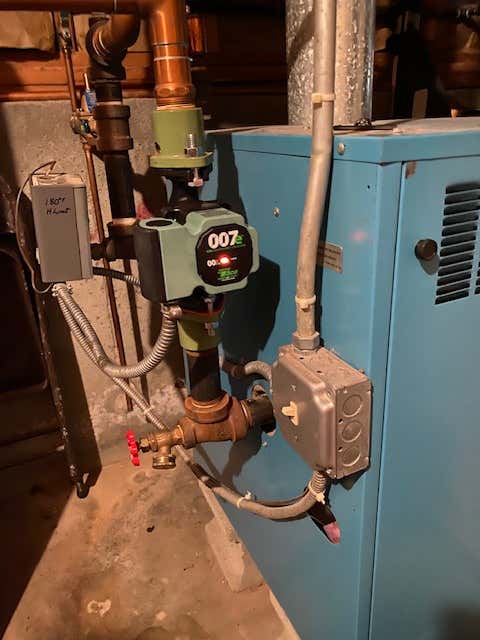 Despite my current status as "Meme Lord", there are times I have to lace up my Carolina work boots and have at it. Yesterday was one of those times.

My wife and I bought this house 34 years ago as a fixer-upper, a starter, expecting we'd sell one day and upgrade to a newer and larger home. (we never did) Every room needed attention, but it was all we could afford and I embraced the opportunity to put my construction skills to work.

I scraped off god-awful wallpaper, fixed and painted walls and ceilings, sanded and refinished wood floors, gutted and remodeled the bathroom, replaced the kitchen counter, and installed a new kitchen sink and dishwasher. The house was starting to show potential, and when I began working on the outside and mowing the lawn, stuff the previous owners had neglected, the neighbors were smiling and waving to me at every chance.

It was in the fall when the heating system came on that I realized I'd have to replace the old hot air system. When we turned it on dust and cigarette ash would blow out of the vents making it unbearable. Apparently, the kids who lived here before were smoking in their rooms and using the floor vents as ashtrays. I was a hot water guy, and in the field, all hot water guys detested "scorched hot air". One Friday afternoon in mid-November, I came home early and gutted the entire hot air system. When my wife arrived home I had the furnace and all the metal ductwork stacked on the front lawn. I had forgotten to tell her about my plan...

Early Saturday morning I took delivery of baseboard heat, copper pipe & fittings, and a Burnham 204 gas boiler with all the trimmings. I worked non-stop through the weekend and by 2:00 A.M. Monday morning the heating system was completely installed. My electrician came over Monday afternoon and wired it up.

That brings me to this Friday night, when around 10:30, we noticed the house getting cold. I ran downstairs and the boiler was cold and not running. I went to the electrical panel and the breaker had tripped. I decided to reset the breaker and see what happens. I went back into the boiler room and saw the circulator pump's electrical cover smoking and before I could flip the switch, it arced. Even though I was in pajamas and slippers, I gathered some tools and shut down the isolation flanges on either side of the pump and removed it. All the wiring inside the cover was burnt, the pump was junk!

At 8:00 A.M. I called my local plumbing & heating suppliers, but due to corona, they were now closed on weekends. The big box stores were limiting their stores to a certain number of customers at a time, and so I would have to stand in line outside, six feet away from others, and wait my turn. I decided to call my salesman on his cell to see if he could open up and get me a pump. While I was a teacher I bought all my supplies from him and he's a jock, and we've spent hours talking sports. He called me back and said he could meet me at the Supply House, but I couldn't go in. He'd get my parts, I'd give him my credit card info over the phone, and he'd put the parts on the rear shipping dock. It was all very Apocalyptic, but it worked.

Here's where it got tricky. I was keeping my eyes on Twitter on Friday night and I saw that El Presidente was "getting into it". I was hoping a "Meme War" didn't break out before or during the time I needed to pick up the parts on Saturday morning. I was pulling into my driveway when I got the text message at 11:53 A.M. from the boss "We're at war". There wasn't time to waste. I had a stockpile of "Live Action Memes" ready and waiting for this moment, and so I put the boiler repair on hold and went into battle for the boss.

After a successful meme war, I ate a late lunch and then installed the Taco 007e, a new high-efficiency circulator. It uses 85% less electricity and is whisper quiet, so quiet that it has a light that comes on when it's energized so you know it's working. What I like most is you can remove four short screws and rotate the motor into the correct position by simply spinning the casing.

Once I flipped the switch the heat came on quickly. By the end of the day, I had protected the boss with memes, tweeted, submitted a blog, and repaired my boiler. I enjoyed the rest of the day knowing I had escaped "The Draft" and  I would not have to catch a midnight train to NYC and clean El Presidente's apartment. All in a day's work...