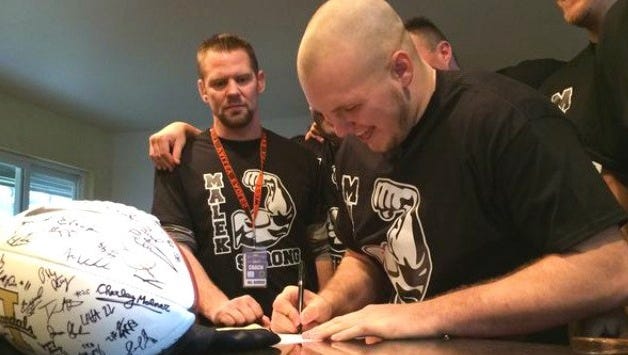 CBS - Idaho may not have one of the top-ranked recruiting classes in the country, but when it comes to loyalty the Vandals are off the charts.

Last week fullback Jace Malek, a high schooler out of Spokane, Wash., who committed to Idaho, found out that he had cancer. Doctors found a tumor the size of a cantaloupe on his hip. His prognosis is uncertain, and he’ll begin radiation next week, but Malek was also concerned that he’d lose his scholarship to Idaho. In fact, he fully expected to, but that’s not what happened.

Malek committed to the University of Idaho last Fall. When he found out he had cancer last week he called the Vandal coaches.

“I told them, ‘listen, I know you need to do what’s best, and I realize that might not be keeping my scholarship.’”

The school’s response blew him away.

“They said ‘you’ve been with us this whole time,’” Malek explained. “Idaho is not leaving your side.”

So like so many other football players on Wednesday, Malek signed his letter of intent and faxed it into the school. Even though doctors have told them he’ll likely never see the field, Malek still says it’s a dream come true.

And he also knows how his story is going to end.

“I’m going to go graduate college and become a famous college football coach,” Malek said. “And then they’ll make a movie after me.”

Wanted to get this up real quick before the week ended.  Just to show that National Signing Day isn’t all about overhyped divas looking to get on ESPN or go viral with some wacky on-stage stunts, or about programs backstabbing each other trying to flip recruits, or about parents hijacking their kids lives and trying to make their decisions for them.  Sometimes it’s just about doing the right thing.  Yeah Idaho could have use this spot for someone else.  Could have easily cancelled it for medical reasons and looked for somebody to fill a gap they needed on their team to try and get an extra win this season.   But they stuck by the kid who earned it on and off the field and who worked his whole life for it.  Didn’t just snatch it away and trash it because he fell on hard times out of his control.  Big ups to Idaho and get well soon Jace.