Okay, lets just say it off the top. I realize this pooch got juked out of his paws at the line of scrimmage. But in today's NFL, every DB is going to occasionally run into a little trouble at the point of release. Luckily hardcore game film grinders like myself that have access to NFL Game Pass know that the All-22 clearly shows @ZaneTheDoberman has a remarkable ability to make up ground, as he went from being dead meat 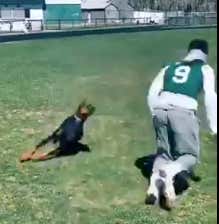 To incomplete in two shakes of a dog's tail 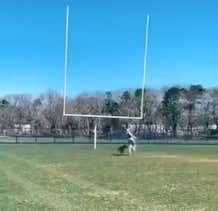 Do I have Game Pass access because it's free for everyone? Maybe, maybe not, maybe fuck yourself

Zane truly checks all the boxes of what you look for in a shutdown corner.

Nose For The Ball? CHECK

Even the name Zane lends itself to great nicknames since any name that starts with Z is awesome, with Zane's "Revis Island" clearly being "Sent To The Kennel".

The only weakness I see in Zane as a prospect is I'm not sure how he would perform in pads. Literally. It's going to be hell for the good people at Riddell and Nike to suit up a four legged creature. I would also like to see Zane match up against receivers that don't resemble Mark Wahlberg in Invincible. But considering this quarantine may never end and this video is doing numbers on Twitter, I expect we will get to see plenty of different receiver types in the coming weeks.

Prediction: There's no way Zane falls past the Lions at 3 despite the age old dog v. cats rivalry. Detroit has their new Darius Slay