When I saw this tweet pop up on my timeline I wasn't shocked. I've been through this before. A veteran of the Twitter timeline. Barry McCockiner changed his name to Bleacher Report and then tweeted this out. Funny joke, Barr....then it hit me. This was actually Bleacher Report. Somehow, someway, Bleacher Report was convinced to do a 3900-word piece on Tyrod Taylor.

Now, don't get me wrong. Tyrod seems like a great guy. He's donated 25k to a food bank in Virginia to help with COVID-19 relief (nice job by the PR agent to get that in there) and has been around in the NFL enough that we know he is a good locker room guy. However, this idea that he is the "Chargers guy" is kind of humorous to me. No, really, the article said that he is the Chargers guy:

He is The Guy in L.A. That's how he has approached every situation, but this opportunity feels different.

They even italicized The Guy! We are talking about a man that was benched for a guy that threw 5 INTs in the 1st half of a game (Nathan Peterman). Maybe it was because he was never given a chance? Let's look at his stats:

A QB record of 23-21-1 for a guy that played with the Bills and Chargers isn't half bad. He threw for over 3k yards in 2 seasons and has kept his INT % among the lowest in the league. He, also, has a decent pair of legs: 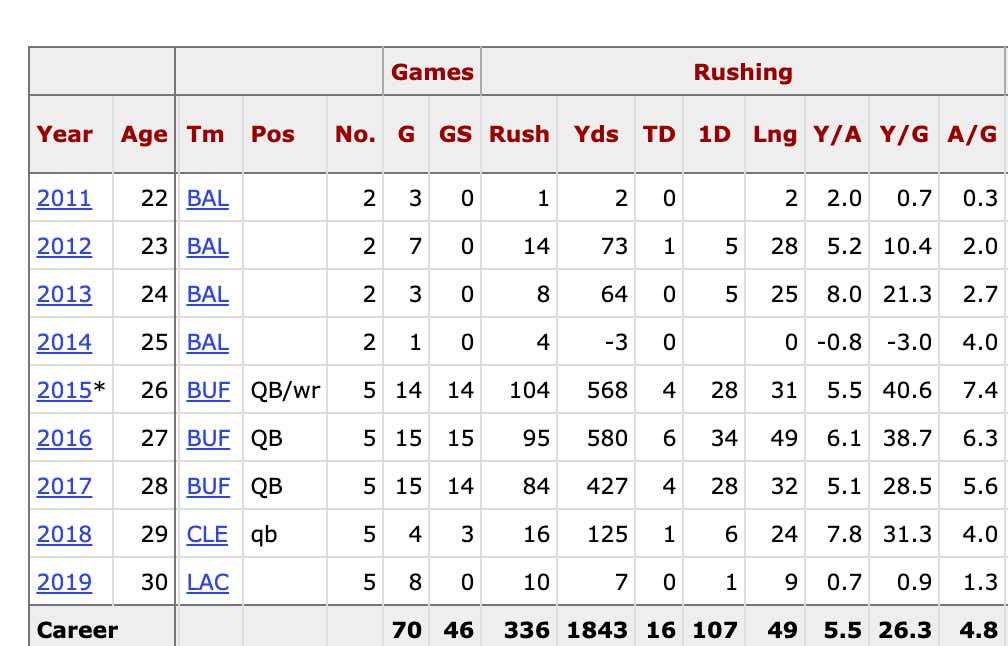 Currently, the Chargers sit 6th in the NFL draft. Let's say there are no trades (unlikely, but whatever):

Now, if the Chargers love Tua, I wouldn't be shocked to see them jump up to get him. We could even see a scenario where Tua falls to them thanks to the Dolphins feeling a bit of anxiety about Tua's medical. I'd really be shocked if the Chargers punt on this draft and stick with Tyrod Taylor. But hey, who knows, maybe he is The Guy. Just be ready for a 6-10 season.