A month ago, I wrote the blog above. SIMP Nation found out that the Ok, Boomer girl had a boyfriend and they immediately came together to get her account suspended. Luckily, Twitter reversed that decision.

You may be confused...so let's get you caught up. Who is this Ok, Boomer girl you speak of?

The video above took Neekokul on a ROCKET SHIP to Internet fame. Her story is the American Dream, when it comes to the internet. I guess you could call it the Internet Dream.

SOURCE-Until the beginning of March, Neekolul was just another Twitch streamer. The 22-year-old, whose first name is Nicole and who declined to share her last name, told Kotaku she began streaming in 2017 while studying to be a STEM major, only for her Twitch progress to outpace her work on her degree.

“I saw these girls use the ‘OK, Boomer’ song in response to people who made rude comments about their colored hair,” she continued. “And I was like ‘Oh, with all the political stuff going on—and I just ordered Bernie shirts—why don’t I do that?’” 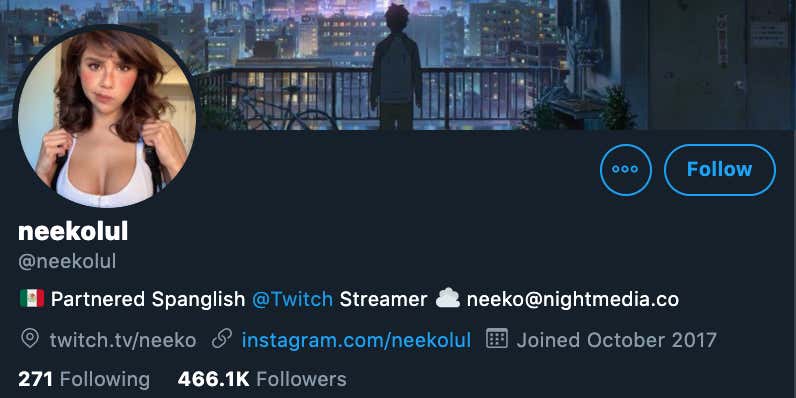 “I think there was a perfect storm of things,” she said. “It was right before the Bernie-Biden debate, and people were voting at the time… But I think without really realizing it, I hit this sweet spot. I want to say the gaming community, but really just the internet likes [a mix of] cute but also cringe.”

If you want a smart version of what I said, here is the guy from Kotaku (the gaming version of Deadspin) who wrote about the Okay, Boomer girl like it was his college thesis:

The video is mesmerizing in a way that makes you feel a small amount of secondhand embarrassment. In it, Neekolul performs a hyper-feminine and cutesy series of dance movements, with the results bordering on cloying. It’s a subtle balancing act between irony and sincerity that TikTok’s most popular video makers have mastered. The video took that formula and applied it in a way that rallied many members of Sanders’ perpetually-online base, who were looking for a beacon of hope after other Democratic primary candidates formed a centrist Voltron and dealt Sanders’ campaign what ultimately ended up being a fatal blow. In Neekolul’s case, it probably didn’t hurt that her variation on the form managed to piss off a lot of boomers, if the replies to her video are any indication. Hate sharing can be a powerful thing. And in this case, it happened among older people who may well have been encountering this off-kilter, hyper-exaggerated cute-meets-cringe aesthetic for the first time. And so, in the calculatedly sultry wink of an eye, Neekolul became a meme: the defiant, bizarrely entrancing “OK, Boomer” girl.

If you want a full breakdown on Neekolul, you can press on the source link above. It's a 3000-word article on a Twitch streamer like she was an NBA player that battled through growing up in the worst neighborhood in America while also raising a kid sister because the parents were always working to pay for his AAU camps.

A lot of the article is about her political views. I'm sure you can guess them based on her Bernie shirt. We won't get into those.

“I feel like a lot of people come to my channel because they found me attractive, and I think that’s the main reason that drives them there,” she said. “I think the drive is the cuteness that I deliver, whatever physical attraction, and then people stayed because I was talkative and easy to hang out with.”

Neeko is smart. She appeals to the masses, specifically the SIMPs:

“Simping is actually kinda fun,” he told Kotaku in a Twitter DM, noting that he simps for Neekolul because she’s pretty and “seems like a nice person.” “It’s not really about trying to impress the girls you simp for. It’s just really fun to do. A joke between me and my followers is how big of a simp I am, so that’s why it’s in my bio.”

I sImP FoR NEeKo BEcAuSe SHe sEeMs lIkE a NIcE PErsoN.

The rest of the article gets into why society props up these Twitch streamer "e-girls." Something about society (specifically MEN) infantilizing women?

“It’s extremely irresponsible to blame women, especially younger women, for the ways men and society have infantilized them.”

I mean I've been in enough liberal arts classes to understand the point, but we may just be thinking too deeply about an attractive girl, who can keep an audience entertained on streams, going viral. People like hot people, video games, and being distracted away from their lousy life. You combine those three and you've got a viral superstar.

P.s. I will say, I was surprised to get to the end of the 3000 word article without hearing about Neeko's success being due to sexually frustrated young men. I was almost certain that was coming.