1. They decided to rebuild

That's a big step because many teams won't admit that and it holds them back for years. After four seasons of between 37-43 victories, the Pistons stunk it up. Maybe it was by choice, maybe it was by force. But it was the right move.

This meant breaking up their "Big 3" of Andre Drummond, Reggie Jackson, and Blake Griffin. Drummond was traded for spare parts, Jackson agreed to a buyout and Griffin can't stay healthy. This freed up a lot of minutes for guys that figure to play a role in Detroit's future like Christian Wood (more on him later), Bruce Brown, Luke Kennard, Sekou Doumbouya, and Svi Mikhailiuk. Brown is a good defender, Kennard/Svi can shoot from outside and Sekou has shown plenty of promise as a 19-year-old on a new continent:

The Pistons own all their own first-round picks until 2026 and are projected to have the #5 pick in the draft this year.

I'm not quite sure those numbers do him justice either so maybe these will:

The ability to finish inside allows him to be productive even on nights when his jumper isn’t falling. Wood is the rare stretch 4 who doubles as a rim-running 5. He’s in the 85th percentile of players leaguewide on spot-up attempts this season and in the 95th percentile among roll men.

The other unique thing about Wood is that his versatility extends to the other end of the floor. He’s holding opposing players to just 54.2 percent shooting at the rim, a respectable number which puts him right ahead of Drummond. But what makes him truly special is his ability to guard on the perimeter. There aren’t many players his size who can stay in front of players like Chris Paul, De’Aaron Fox, and CJ McCollum on switches.

So he's 20/10 a night, shoots threes at a plus level, rim runs at an elite level, can defend the rim and move his feet defensively on the perimeter. Also, he's 25 years old. Decent.

With the contracts of Reggie Jackson, John Henson, Brandon Knight, Langston Galloway and Josh Smith (they were still paying him!) expiring, the Pistons see over $50 million dollars of salary cap space open up. Griffin's deal has only two years left and Tony Snell/Derrick Rose both become expiring contracts. The rest of their young pieces are on rookie contracts and under team control for at least another season.

1. One of the more helpless situations in the league

Wood is an unrestricted FA. He could walk for absolutely nothing this summer. They're looking at a top-five pick which should be another solid piece, but nothing to move the needle. Griffin and Kennard missed most of the season due to injury. They got expiring contracts and a second-rounder for the best rebounder in team history. It was the right move to trade him, but you talk about selling low.

2. The Blake experiment ends with a whimper

This one is more of a sad thing than a bad thing. After a three year hiatus from both the All-Star and All-NBA teams, Blake reappeared on both in 2019. Detroit made the playoffs and it was looking like the Blake contract might not be a disaster. This year, he played 18 games before knee surgery shut him down for the season. He has two years and $75 million dollars left on that contract and who knows how he looks next season. Here's to hoping rehab and some time off gets Blake back to his old self.

Detroit is in the worst part of the rebuild: mediocrity. They have a star player…but he can't stay healthy. They have a budding star in Christian Wood…but he can walk this summer. They have young talent…but no one that projects to make an All-Star team anytime soon. They have cap space…but they would probably have to overpay to get middling talent. They have an 11% chance at the #1 pick and a 52% chance to get in the top-four…but this is a draft that is perceived to be low on talent with star potential. It's no fault of their own, but this is how many rebuilds look.

1. Re-sign Wood at all costs

At ALL costs. This is reminiscent of when Hasaan Whiteside blossomed in Miami for cheap and then hit free agency at a time where Miami's options were to pay him the max or lose him for nothing. Whiteside was coming off of leading the league in blocks and making second-team All-Defense. They paid him $98 million dollars over four years. I'm not sure it will cost that much to keep him but he's hitting free agency at a time where the UFA class isn't great: 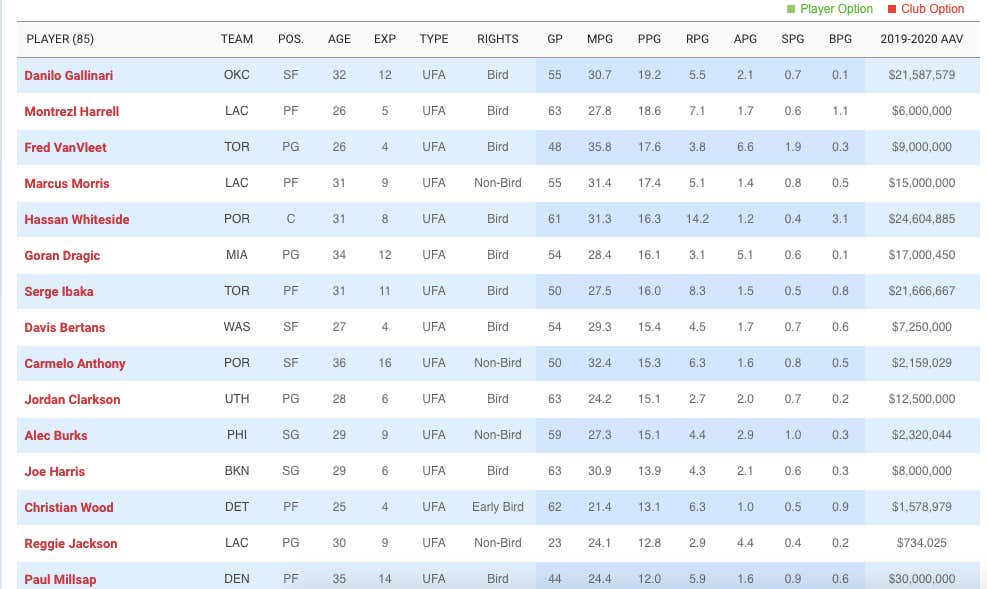 A team with cap space might put a $20 million/per year offer out to Wood and he may take it on the spot if the Pistons get cute on the first offer. You're not doing anything else with that free agency that outweighs what you can do by keeping Wood so I'm not sure you can overpay for him. He can't leave the building without signing the dotted line, Mark Cuban/Deandre Jordan style.

Rose had a great year off the bench for Detroit (18/6 on 49% FG shooting) and is under contract for another year at a very reasonable $7.6 million. Rose missed time to injuries (surprise surprise) but if he can show he is healthy, I think the Pistons can get a late first-rounder for him. Markieff Morris went for a first-round pick this year and he was on a one-year deal and making twice as much as Rose will. Last summer, the Nuggets traded a first-round pick to OKC for Jerami Grant and brought him off of their bench. You may be able to get a pick in the late-20s from the 76ers, Jazz or Lakers looking for offense from the second unit.

3. Make a decision on Luke Kennard

There was talk of trading him during the season to Phoenix, but that didn't shake out. I'd go the other way and try to work out a cheap extension with him, similar to the one Miami did with Justice Winslow. Winslow missed 86 games through his first three seasons and agreed to a fair extension before the start of his fourth: 3 years/$39 million (the last year is a team option). Kennard has missed 67 possible games (non-Rona) through his first three years but is currently working back from tendinitis in both knees (DAMN) that has had him out since December. Before the injury, Kennard averaged 16/4/4 on 44/40/89 splits. He's a great shooter and got to the line twice as much as he had in any previous season, and also boosted his AST-to-TO ratio. This shows he's got a little play off of the bounce with an ability to get to the line or create for someone else. I'm not sure what the per year contract number will look like but a deal that gives Kennard a little security, while not crippling the Pistons if his knee issues persist feels fair. Look at it like this, if he's really hurt you are really only on the hook for two years of the extension at a moderate price. If Kennard is healthy and has another good season before hitting RFA, the price will only go up. If you can get him on something of a short-term deal, I'd do it.

Thoughts: The Pistons have so many free agents, they only have to leave one player unprotected. And it hurt my feelings to do it.

Thoughts: Sigh. It would have to be Blake. You leave him unprotected and hope an expansion team rolls the dice on him. You could also negotiate a trade with a team to ensure that they did select Blake. If you had immediate plans for that cap space (Miami Big 3 style) then this is the move. If not, then it's not.