Yup, I get it. Dogs, accents, quarantine- it's the perfect combination. If he had a German accent that'd be one thing, but the dulcet Scottish tones rolling off the tip of his tongue made it sound he was narrating like a golf match. Combine that with a couple of pooches and you're going to get massive numbers. I'm talking Ellie Schnitt wage gap tweet numbers only bigger...

10 million views all because a couple of bitches tried to steal from each. And you know what? That's not even greatest part. The greatest part is that those dogs have zero idea what's going on in the world. Their entire lives revolve around that very moment where one is try to steal the toy and the other is trying to protect it. That's it. Makes me wanna be a dog. Anyway, I'll leave you with  two screen grabs. The thief vs the thieved. 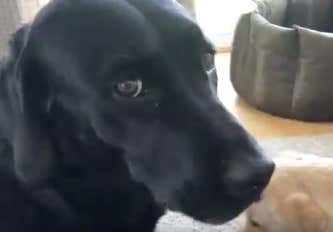 Never sleep on a sleeper.