Going to try to make this quick but I need to vent. Yesterday I tweeted a picture of my quarantine dinner:

I tweeted it fully thinking I was about to get ripped to shreds because of the dinnerware I have in my home, but boy was I wrong. People didn't give a single flying fuck that I bought two plastic plates from Target for $1 the day I moved into my new apartment back in August. They didn't care one ounce that I never took the time out of my day to buy better ones.  They didn't care that I was eating two Italian sausages with no buns. NOPE! They cared that I "undercooked" them:

And on and on it went. But guess what? THEY WEREN'T UNDERCOOKED!!! In fact, they were cooked to perfection, as I panfried them in hot giardiniera oil.  That, and I checked. Want proof? 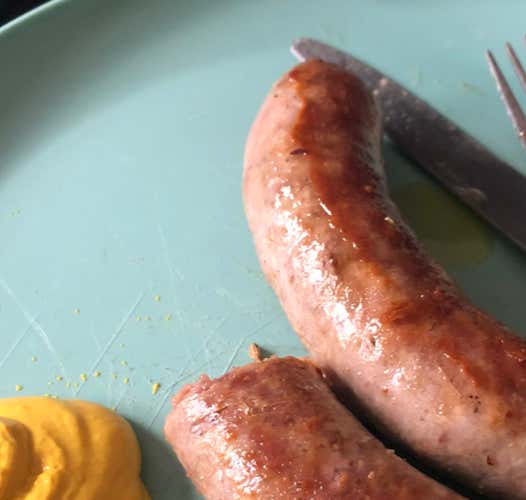 See the end of the sausage on the bottom and/or left?  I sawed the end of it off with the Target brand butter knife you see in the same pic and it was a nice brownish gray hue in the middle aka cooked perfectly.  But again, I tweeted the picture out thinking I'd get ripped on for the knife marks in one of the 2 plates I own, not for the food itself. I was going to join in on the laughs. But nope! I'm being declared a bad cook and I will NOT stand up for that.

Once again the results were astonishing. I couldn't believe my eyes, just a gaggle of nose in the air, holier than thou assholes ripping on a man's quarantine dinner:

"WSD is that a salmon filet?"

No you fucking idiots! It's a goddamn bacon, sausage, onion and pepper breakfast burrito and it was fucking DELICIOUS.  Oh and so glad you asked, I did sauté the onions and peppers in giardiniera oil as well. Ya know, for that extra kick. But again, people ripped on my meal.  Don't ask me why it looks like a salmon filet, because I don't really know. I think it was a glare or something?

Absolutely abhorrent behavior out of the twittersphere tonight. I almost made a second one out of spite to show what the inside of the burrito's guts looked like, but I ran out of tortillas.  You bastards on Twitter lucked out!

Stay tuned for my meal tomorrow. I'm gonna put Shaun Latham, Chef Donny, Large, Emeril Agassi, and anyone else in the cooking game out of business.