[Source] - The UNC guard would have earned $476,000 during his freshman year in Chapel Hill if allowed to sell advertisements, endorse products and leverage his social media presence, according to a study by Athletic Director U and Navigate Research. Only Heisman Trophy winner Joe Burrow, estimated at $700,000, would have earned more.

The study applied typical values for group and individual licensing fees in professional sports to college athletes and used Instagram followers as a proxy for individual value. The study listed football players who have finished their careers separately from others, which is how Anthony ended up No. 1 on the main list. Duke’s Cassius Stanley was third at $405,000, with Clemson quarterback Trevor Lawrence fourth at $390,000. Anthony has about 597,000 Instagram followers.

There is no hotter debate in the college sports world more than name, image and likeness. People say that athletes get compensated enough with a scholarship. That they are 'lucky' to not have to be in student loan debt because they excel at a sport. Sure, that's true. They are lucky to not be in debt - as are regular students on scholarship too. There are benefits of being a college athlete, no one is questioning that.

What people are questioning though is whether a scholarship is enough or the right compensation. I've said it before. From the school it 100% is. The school shouldn't have to pay these athletes a salary or anything like that. They get everything that comes with a scholarship from living arrangements to stipends to food, etc. That all is important. However, this study shows how much is left on the table for these guys and gals.

Now the biggest flaw in this study  - and they acknowledge it - is that it's done as if college athletes are compensated the same as pro athletes in this deal. They used Instagram as a proxy for the study. It's simply as many followers they have leading to ad deals and how that would translate to money. Think about that for a second, just using Instagram, someone like Cole Anthony could make $476,000. It's even more than that - this is the top-10 according to the study (h/t ADU): 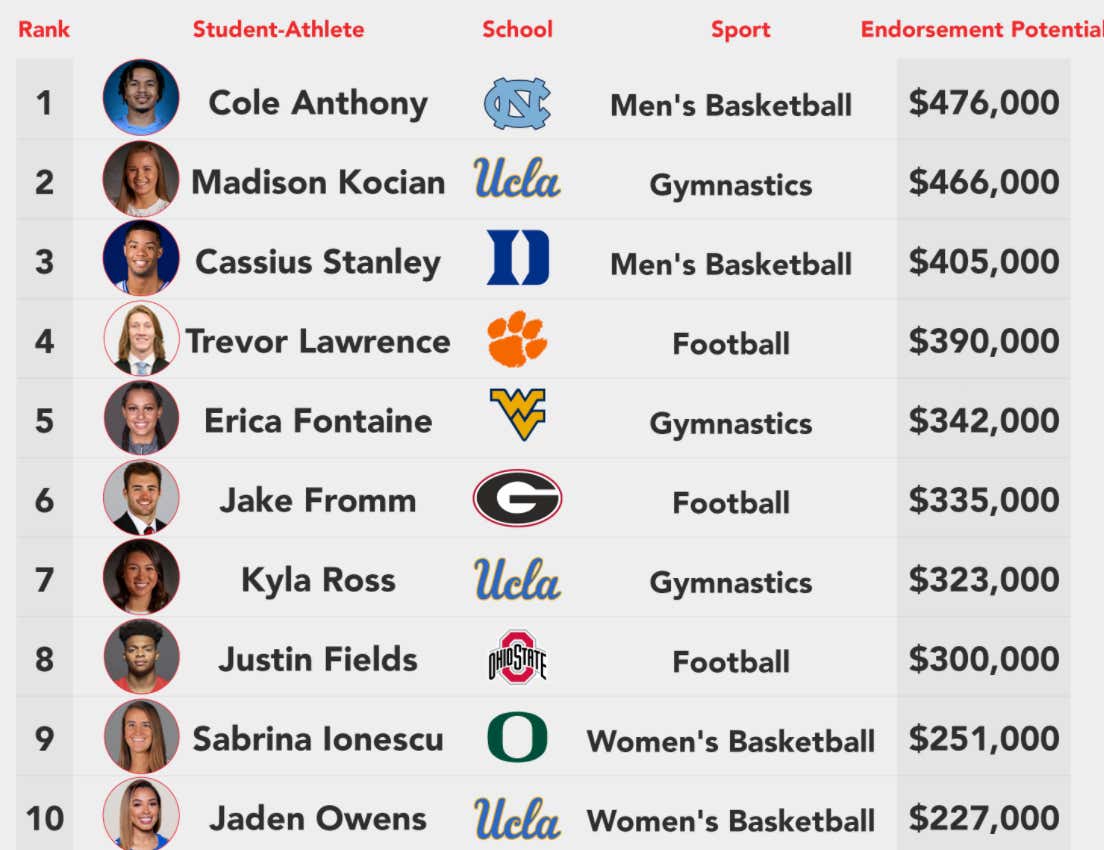 Two women's basketball players and three gymnasts make the top-10. You could argue that their peak in terms of marketability (outside of maybe Ionescu) is present day. Will Kyla Ross ever be a bigger name than she is right now? It's not like a pro gymnastics league is on the same level as the NBA, NFL or shit even the WNBA. That's $323,000 she could have just from being a gymnast at UCLA.

Again, who is this hurting or why do we give a shit about these guys and girls making money? This is what they are arguably worth to ad deals! How does that change what they do on the court, field, etc? It doesn't. You still have to compete. Sure you may be pocketing more money than someone at like Cal State-Fullerton, but you still have to go beat Fullerton.

Amateurism is a fraud. It's a term the NCAA uses to come up with this idea that they are playing as a student-athlete, which has changed. Everything has grown since these rules were put into place. It's time to start adapting.