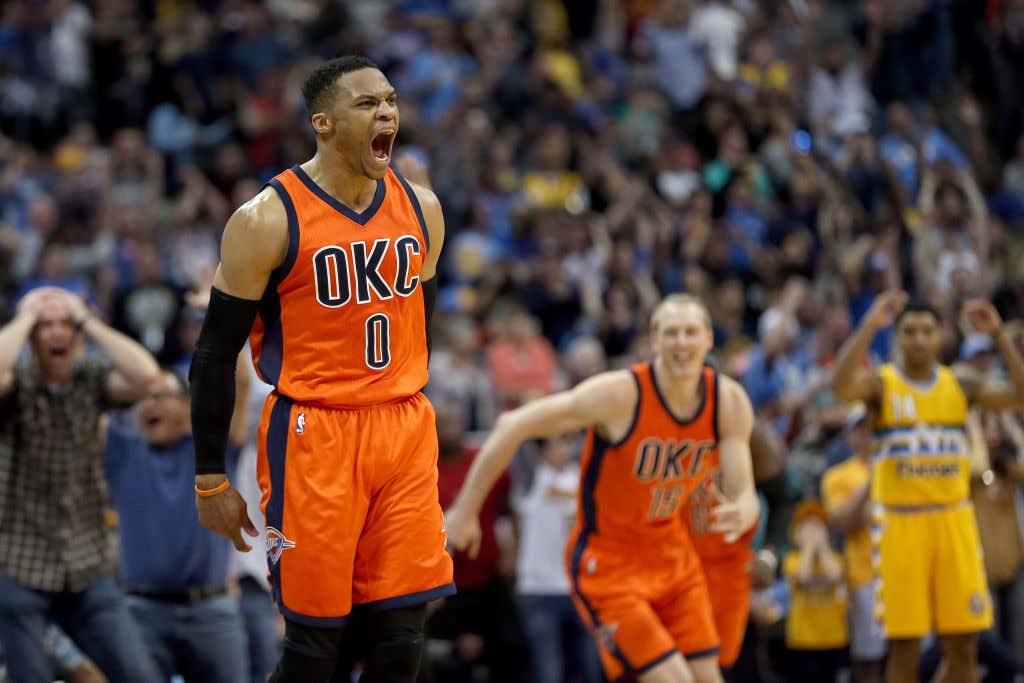 Sometimes I think we as NBA fans take Russell Westbrook for granted. I know he's not all that efficient and has his faults, but we simply haven't seen an athlete like him before. All of the sudden it became cool to say triple doubles don't matter which I find weird and you forget this dude put up THREE STRAIGHT SEASONS averaging one. Name someone else who has come anywhere close to that feat. You can't.

So why am I even bringing this up today? Well, on this date three years ago Westbrook went nuts and put up a ridiculous 50/16/10 performance including a badass game winner to break The Big Os record of 41 triple doubles in a season. That shot also eliminated the Nuggets from the playoffs so it was the very definition of a dagger

That's some movie type shit that you wouldn't believe if you didn't see it with your own eyes. Westbrook second all time with 146 triple doubles (Robertson has 181) and he owns the record for most consecutive triple doubles with 11.

Now maybe you think a lot of Westbrook's success in OKC was because Durant left and he was really the only guy there. Well then how do you explain what he did this season? He basically eliminated the three from his arsenal because he stinks at them and has bounced back with a 27.5/8.0/7.0 season shooting 47% (his highest ever) all while playing with ball dominant James Harden. We've seen him completely change his offensive approach

and still has 8 triple doubles on the season which is good for 4th in entire league this season. One of the biggest questions heading into this season was how both Westbrook and Harden would coexist, and it's pretty clear the answer is rather well.

Westbrook is definitely the kind of player you either love or hate depending on if he's on your favorite team or not. It's fitting that he's teammates with James Harden, who is basically in that same spot. It'll be interesting to see how his game evolves as he gets older and loses some of his athleticism, but at the same time he's such an athletic freak who knows if that will ever happen.

It feels weird to say someone who is basically a walking triple double would be under appreciated, but I honestly think that's the case with Westbrook to the average NBA fan outside of Rockets/Thunder fans.