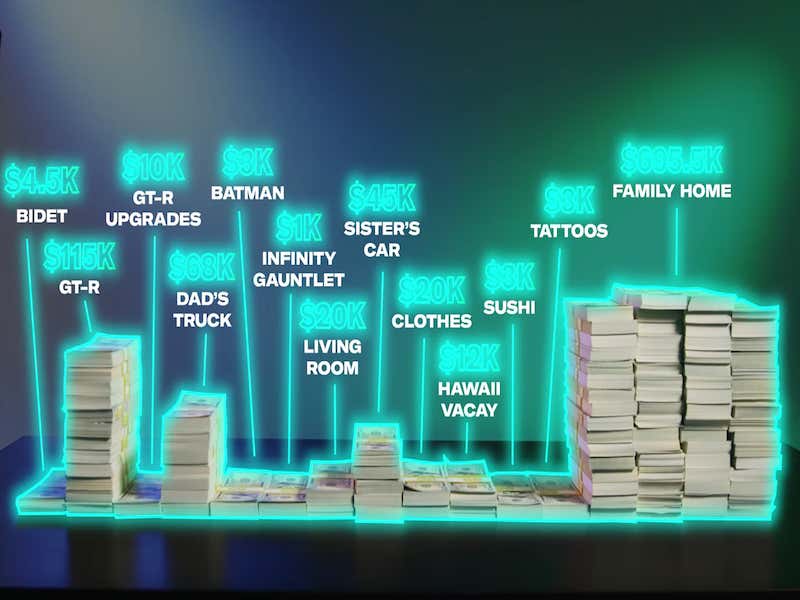 Well if I didn't already love Will Hernandez for being the meanest man that ever lived this side of Old Man Mertle from The Sandlot, the way he threw around his first milly would have locked up my heart. Fuck all the nice shit about Will supporting his family by making sure they don't have to deal with those pesky car or mortgage payments. I'm more impressed with the important things he bought. I don't know what comes with a $4500 bidet that makes it worth being 100 times the price of an Amazon bidet since Will bought his before TP became the hottest commodity on the planet. But I imagine it acts like a bathroom attendant that turns on the sink for you, hands you paper towels, and lets you choose from a hilariously deep selection of candy after it finished washing your ass. You can't take over Gotham without a giant Batman. That's just Day 1 New York City stuff. And you definitely don't have a shot blocking some of the baddest, strongest, most athletic motherfuckers on the planet 16 times a year without being ink'd up. That's just science.

Then of course, we have the Infinity Gauntlet. How well I am doing financially for the rest of my life will be directly linked to how high quality my best Infinity Gauntlet is. As you can tell, we are not exactly thriving at the Casa de Clem these days.

But maybe with some hard work or figuring out what the next Saturdays Are For The Boys/Zillion Beers movement is, I can upgrade from a $25 plastic glove with wonky lights my kids destroyed the first time they looked at it to Will's $1000 gauntlet that has absolutely consumed my mind since he showed it in that video.

Anyway, we'll see how Hernandez pans out as the highest picked Hog Molly that Dave Gettleman has drafted since becoming Giants GM. But if Daniel Jones' decision making on the field is nearly as good as Hernandez's off the field, we will have another Hall of Famer lining up under center for the next 15 years.

Speaking of which, I guarantee Daniel Jones' first million was spent on button downs, slacks, brown shoes, and granola bars. Which I fucking love. I cannot wait for this season to start (if it ever does actually start).