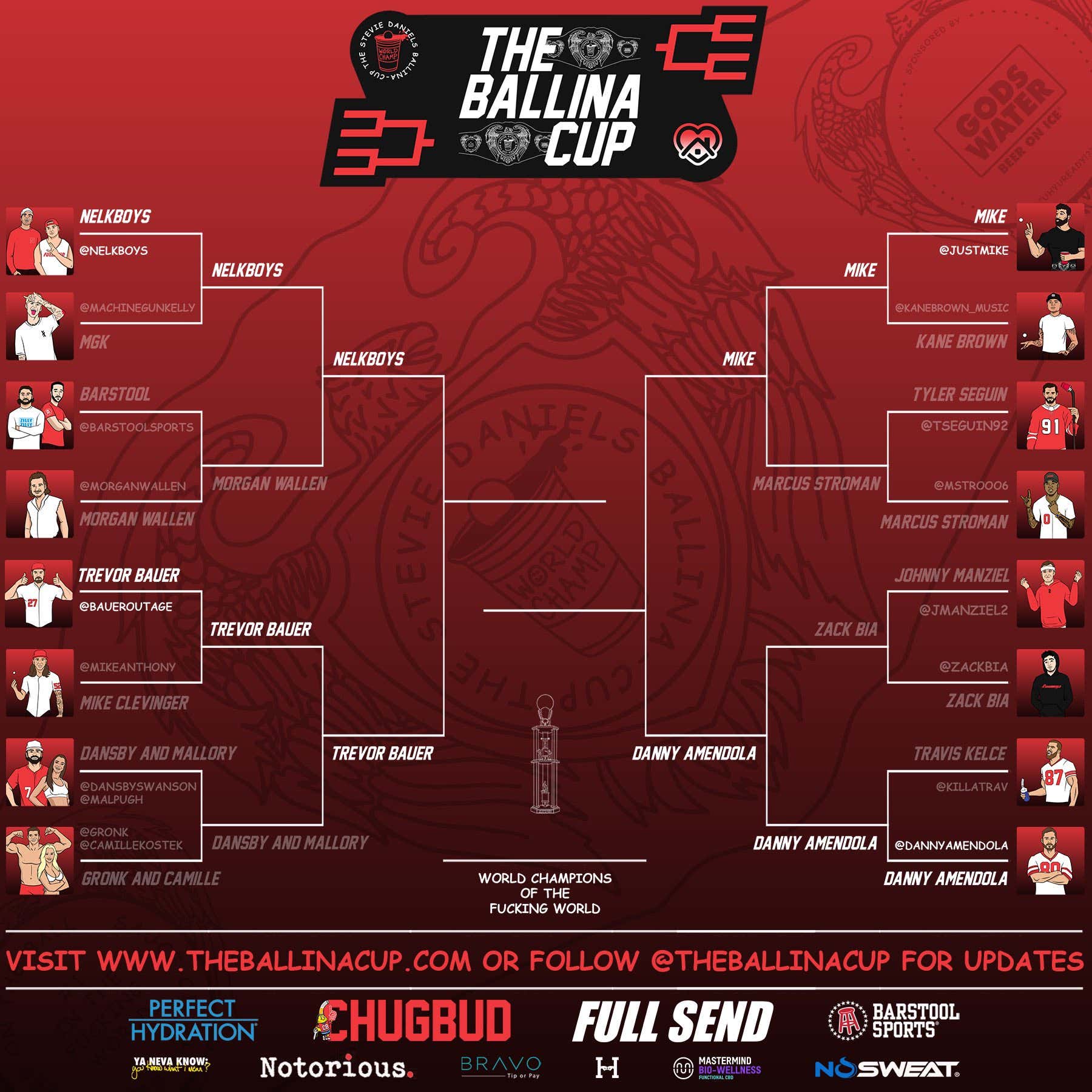 Out of more than 23,000 brackets filled out for the tournament, there are NONE that remain perfect. Entering the quarterfinals, there were four people who started off a perfect 8-for-8. There is still plenty of movement expected over the next two days. Our leaderboard right now is loaded with a 24-way tie (!) on top. That includes...

**REMINDER: All brackets must have been submitted BEFORE the first game on April 3 at 9 PM PST. Any bracket that was submitted after was disqualified.**

We started with 16. And now, there are four. The semifinals of the Ballina-Cup tournament are set after an entertaining quarterfinal round. Here is a refresher of the last two days on the pong tables across the the country:

Storyline of the Match: Bia's questionable re-rack. In a close rubber match where he was trailing, Bia attempted a "4-3 zipper" formation in which his opponent, Amendola, called "one of the craziest re-racks he's ever seen." It turns out that it didn't matter too much, as the NFL Wide Receiver marched his way to the Final Four.

Storyline of the Match: The Nelkboys closing the match out with FIVE straight shots. This match featured tons of good content straight from the beginning, where the teams agreed to a "Skoal Can Coin Toss." That's a real thing. But when it came down to business, the Nelkboys were all business. A no-doubter to finish things off and punch their ticket in the semis.

Storyline of the Match: The emergence of "Scotty Buckets." The Cincinnati Reds pitcher brought along a brand new partner for this matchup, and he made his presence known immediately. Bauer called Mr. Buckets the MVP of the tournament, which is interesting given it was just the quarterfinals. But if Scotty puts up another strong showing or two, that talk certainly has a chance to become reality.

Storyline of the Match: Mike backs up his talk. Two matches, two game-winners for the commissioner immediately after calling his shot. While the MLB pitcher in the matchup above moved on, it's the end of the road for New York Met Marcus Stroman. We are now two Mike wins away from everybody and their mothers saying this tournament is rigged if Mike wins, because that's what people complain about if a commissioner who is also a participant wins a contest (ex: fantasy football).

We might as well call this one "Shit Talker Mania." Both the Nelkboys and Trevor Bauer have been very vocal during each of their respective tournament runs over the last week in a half, and they finally clash here tonight. Bauer has been smooth in each of his two wins, while the Nelkboys put their win via DQ over MGK in Round 1 in the rearview mirror with a big win over Morgan Wallen as well. Should be a good one.

It's safe to say that Mike is going to be very confident heading into his Final Four date with Danny Amendola. As mentioned earlier in the blog, Mike has ended each of his two wins in this tournament after calling his final shot and sinking each of them. On the flip side, Danny Amendola has needed a rubber game three to squeeze by his first two opponents. The commish will be favored here, but don't count out the heart of a Super Bowl Champion.