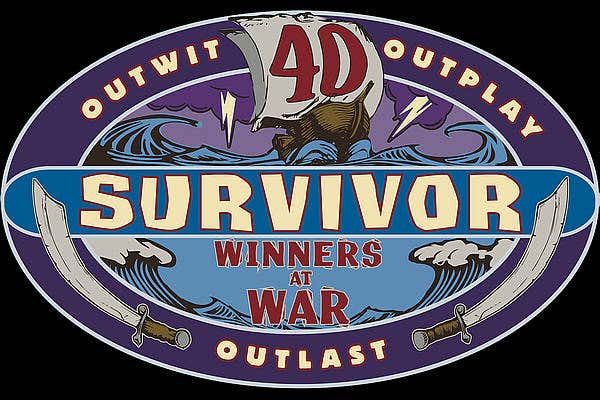 What a ridiculous hour of Survivor we witnessed last night. One of the best pound-for-pound episodes I can remember in quite some time. Everyone this season has been a little hesitant to engage in war, but it feels like we finally had shots fired last night with an epic tribal council. Let's get into it.

We'll start on the Edge, where Wendell joined everyone else. Everyone read together a clue to a new advantage that involved "history repeating itself." While this was confusing at first, Danni (who I almost forgot was still there) put together that Aubrey found something by the holes in the stairs on her season. Her and Parvati went to look, and sure enough, there it was. This was a brand new advantage we've never seen before. It's a safety coin. A player can flip it at tribal council for a 50/50 chance to be safe at the vote, good through Final 7. They could offer it to a player in the game for any number of tokens. They offered it to Michele for four.

While at first, Parvati and Danni considered keeping it a secret to get their own food, they realized that just wasn't the right thing to do. They told the tribe, as a lot of them have been starving. Basically everyone with the exception of Yul and Wendell. It was good to see Parvati "actually playing the game" as she said. She hasn't been very involved this season. Typically cutthroat, she showed she has a heart by sharing with everyone else.

After the Wendell exit, Michele and Nick felt very betrayed. Michele said she's wanted Wendell out and would've gone along with the plan. Nick was extremely mad and claimed he'd get revenge on all these people.

Elsewhere, Adam was speculating that there might be a live idol hidden at tribal council. He recalled seeing a symbol on Jeff's podium that was identical to the one Denise had on her idol. 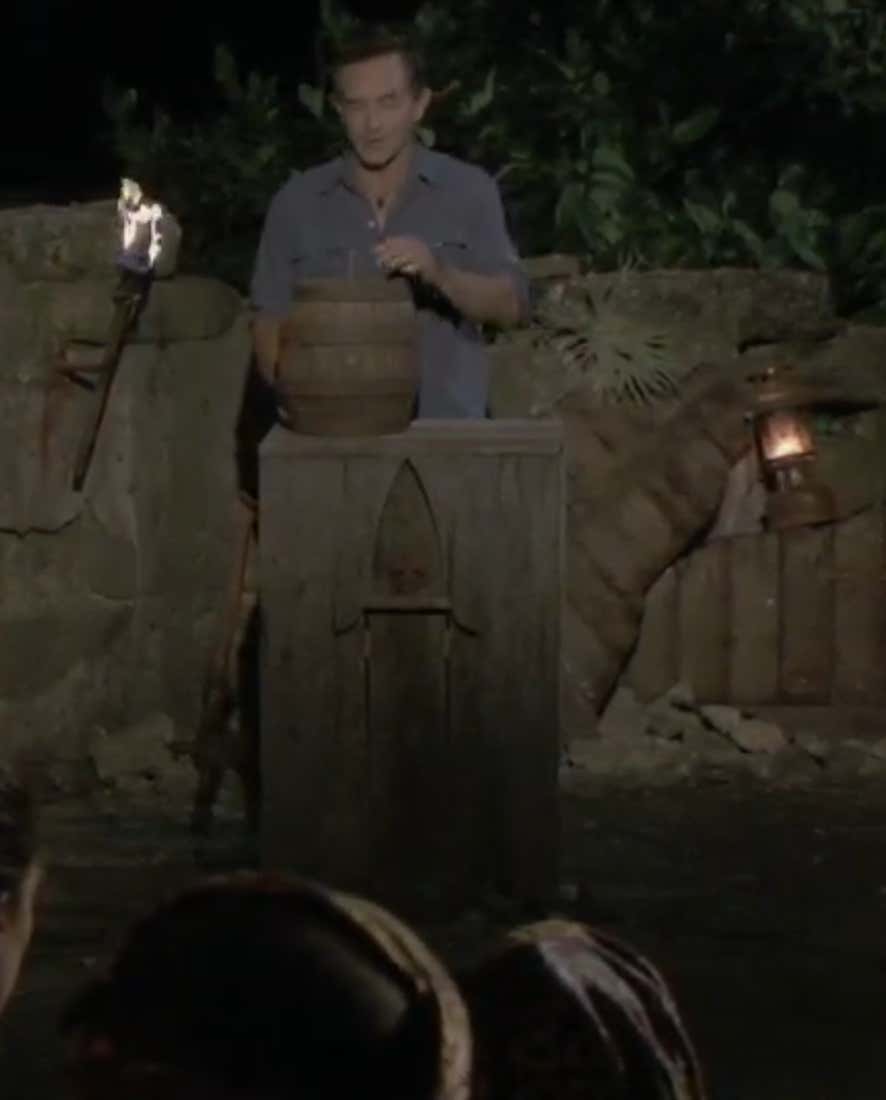 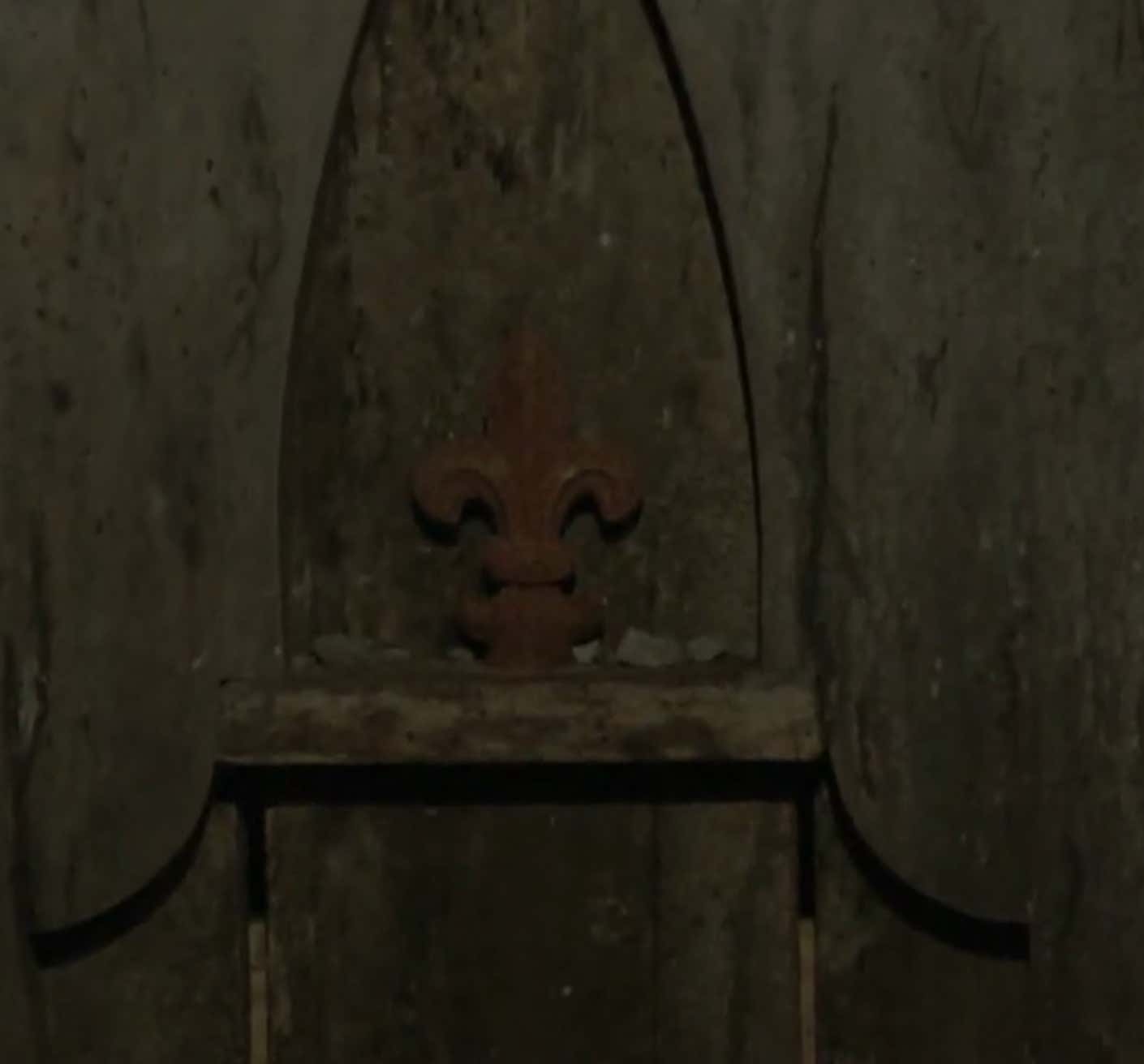 He felt very confident that it could be one and mentioned how epic it would be if he could use it to save himself.

The reward challenge involved swimming and a puzzle. It was for Chinese food. The tribes were split up in a school yard pick. We had Kim, Sophie, Sarah, Michele and Ben facing off against Tony, Jeremy, Nick, Adam, and Tyson. Denise was the odd one out so didn't get to participate. The girls + Ben won the challenge. Sarah then made a very interesting decision. It was Nick's birthday, as he pointed out earlier in the episode by saying he couldn't believe he was blindsided on his birthday. Hey Nick, nobody cares that it's your god damn birthday. Well, except Sarah apparently. She gave up her reward for Nick for his birthday and because she knew she'd "eat too much."

This was a bad move. She may have actually meant it as a genuine gesture, but everyone else will see it at as a game move. You don't want to make such a flashy move in front of everyone. There is no benefit to this decision. As Nick said, he doesn't feel like he owes her anything now. And all it did was give everyone else a chance to target Sarah. Adam, Tony, Jeremy, and Denise all said this move proves that she's playing too hard.

On reward, the group was looking for clues but had no luck. Michele did open up a couple of cheesy fortune cookies though that mentioned not being afraid of risks or something like that. Shortly after that, she was gifted the safety coin from the Edge. She would have to give all four of her fire tokens. She debated it at first, but decided to take the advantage. She said she felt the Survivor gods sent her a message with the fortune cookies. Personally, I think fortune cookies are a lot like horoscopes: dumb. I would've taken the coin no matter what. Eventually, people need to use their tokens or something. There's no reason to hoard them. Sure, this isn't as great as an immunity idol, but there's a 50/50 chance that it is. So I think Michele made the right move. I also think this might be a bit of a "winner's moment." 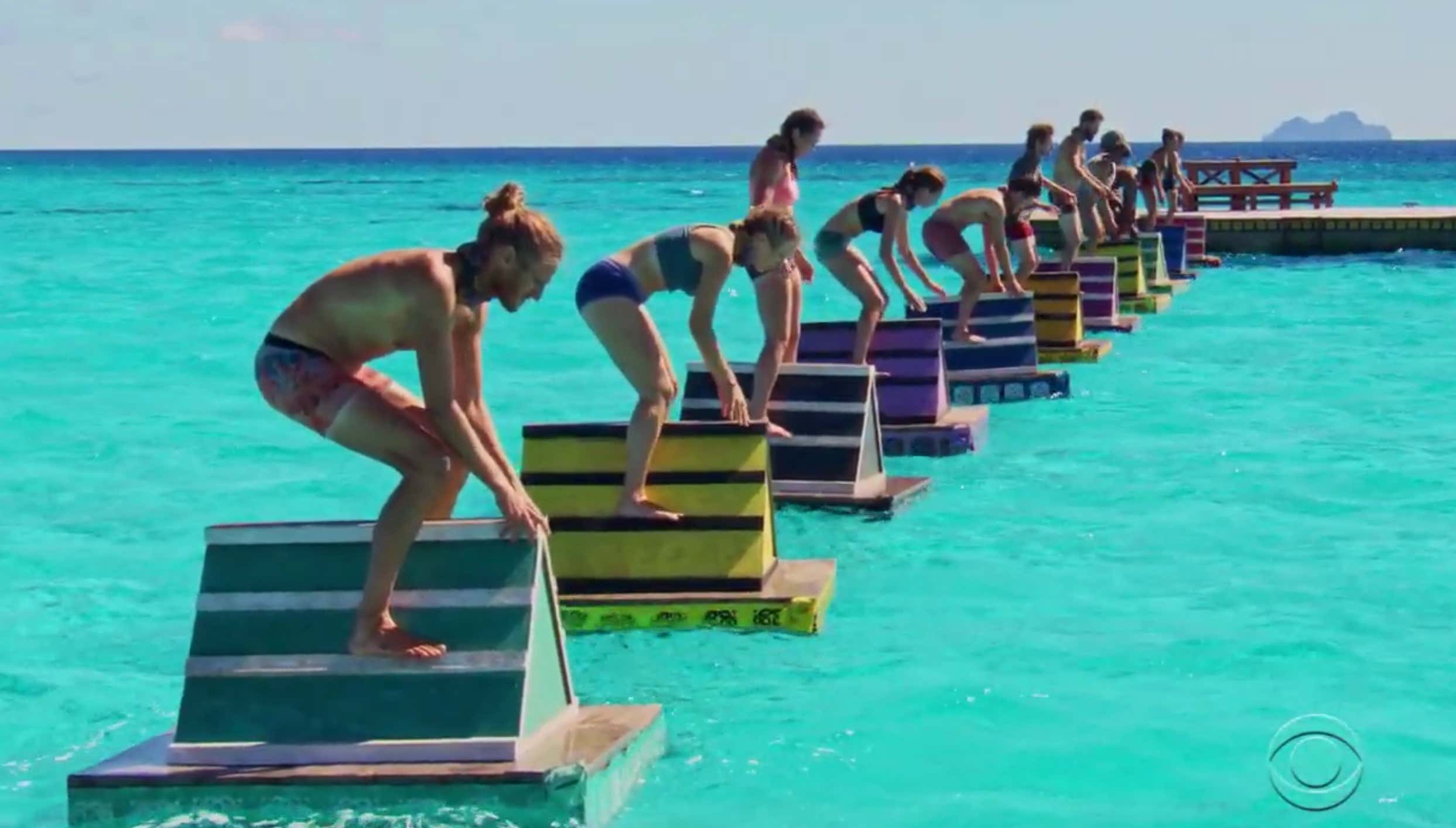 Like last week, this is another one of my favorite challenges. I basically like all individual challenges that involve endurance or something like this. Much more entertaining than obstacle courses and puzzles. This proved to be a difficult challenge for a lot of people. It came down to Ben and Kim, with Kim ultimately prevailing to win immunity and a fire token.

Side note: I absolutely love the music they've been using. Pretty sure it's an original song for this season. I know it's not "traditional" Survivor but I like it a lot, especially for this season.

An already solid episode was really about to get crazy. This is probably the craziest pre-tribal that I can ever remember. Everyone's name was getting thrown out. I will try to recap, chronologically, all the plans that were discussed.

-Kim suggested splitting the vote on Nick and Adam

-Ben then said to split it between Nick and Michele since they were the outcasts on the previous vote. Kim just really wanted Nick out.

-Nick then went to Tyson and told him that Sophie had thrown Tyson's name out.

-Tyson went to Jeremy and Adam with the plan to vote out Sophie.

-Adam convinced everyone that Sarah was the bigger target due to her bond with Ben. They told Denise and Michele the plan.

-Denise went to Kim, who said she was fine with Sarah.

-Kim told Tyson she didn't love the Sarah plan. Tyson said they should flip it on Adam since he was the one with the power to persuade everyone into voting for Sarah. He brought that plan to everyone. Tyson stressed the need to create confusion so people forget about you.

-Sarah found out and told Ben that Adam said "Ben and Sarah are too close."

-Ben confronted Adam to see who said that. Adam denied saying it but wouldn't say who did. It was an extremely awkward interrogation to watch. Ben and Adam have had a very funny relationship all season. It's like a love/hate big brother-little brother thing. Almost like a sitcom.

-We then got a quick montage of all different names being thrown out: Nick, Sarah, Adam, and Tyson. It was absolute chaos. Nobody knew what was happening. Adam was freaking out and considering going for the idol.

It's incredible that with all this madness, Tony and Jeremy's names never came up. They are probably the two biggest threats left, and yet their names were never mentioned. Incredible jobs by them.

A crazy pre-tribal led into a crazy tribal. I don't think anyone in the game or watching the game had a clue what would happen. They talked about how hectic everything was at camp before the vote and that it seems like people are actually playing the game now. Nick gave some big speech about how he wanted to finally start going after people. I don't get why people do big speeches like this at tribal. I'd just say as little as possible.

And then the whispers started. Eventually everyone was whispering while Adam and Ben started bickering like they always do. 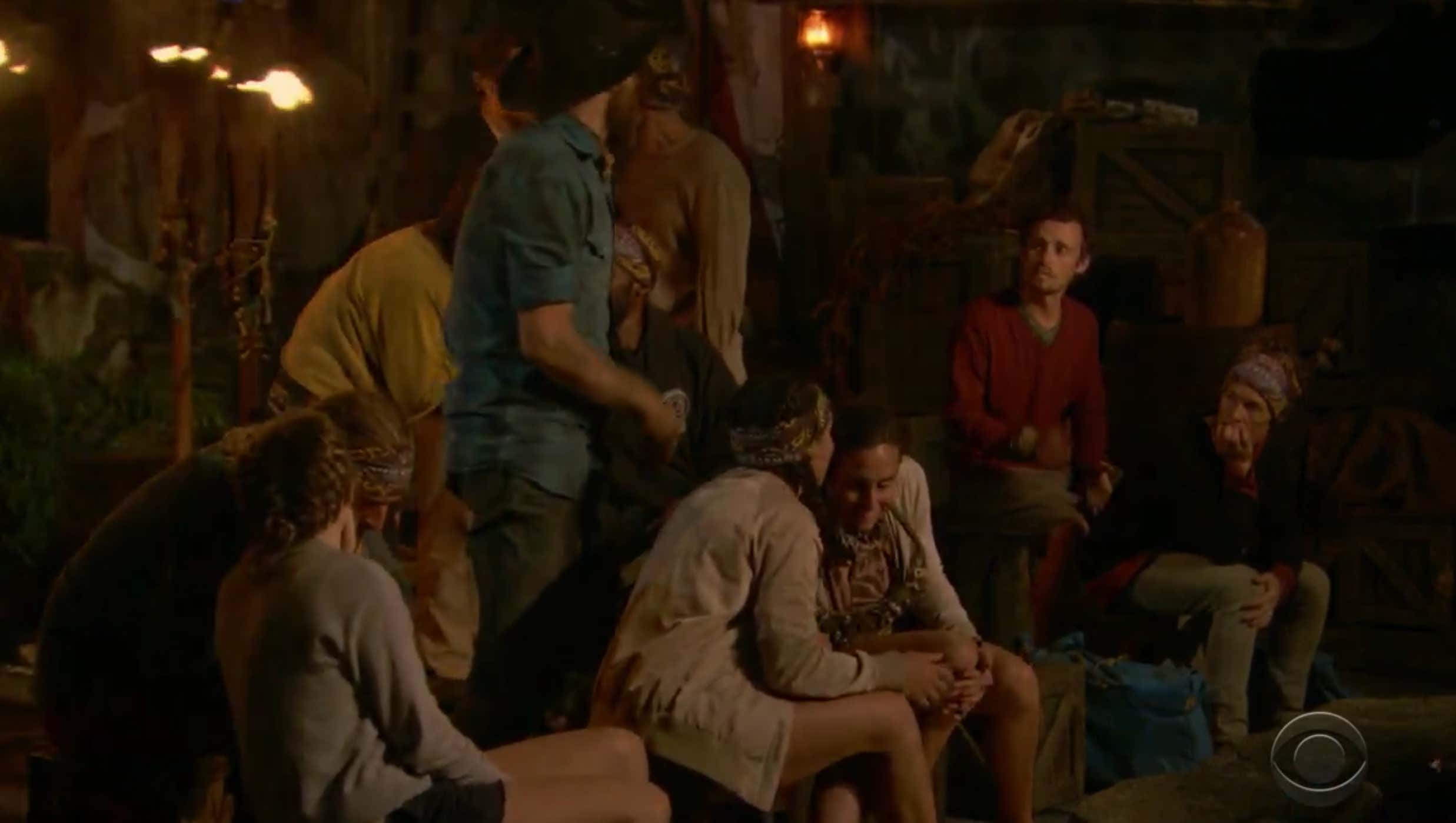 Adam called Ben sensitive, which got a big reaction from the jury. Maybe these two can get a spinoff series one day. Adam asked if Ben is writing his name down and Ben said no. Nick said he felt better, which made Adam feel worse. Adam was then just pleading with everyone asking if they're voting for him. Nobody would respond. Tony had to explain to Adam how voting worked. It was time to vote.

Jeff asked if anyone had an idol. What followed was one of the funniest scenes in Survivor history. Adam got up and tried to grab the thing from Jeff's podium. He could not. He gave up and said "Worth a shot. Thought maybe it was an idol." Jeff then toyed with him a bit and said, "You're convinced it's not?" Adam then said "Is it? I want to play that."

The votes were read and Adam was sent out by an 8-2-1 vote with 2 votes to Nick and 1 vote to Sarah. Adam gave Denise his fire token. Unfortunately since Survivor doesn't show the votes now, I"m not sure what two other people didn't vote vote for Adam. In his exit confessional, Adam said he made too many mistakes and maybe felt overconfident since he thought he had the podium idol. I'm honestly surprised it wasn't an idol. I could see Survivor doing that in a season like this. I wonder if Jeff considered making it an idol in the moment. I'd say we'll see it on a future season, but Jeff said that's unlikely because he doesn't want players destroying the tribal set.

And that ends a very interesting story arc on Adam. He had more confessionals that anyone so far this season. He became a narrator in the game. His edit was confusing. For awhile, I had him ranked low and thought he had the "awkward, laugh at him" edit. But then there were times he definitely seemed like a fully developed character that could have a winner's edit. In the end, it ended up being the former as evidenced by his exit. He gave us one last laugh on his way out. While I did find Adam annoying at times, he started to grow on me and did provide some comedy. Let's see how he handles Edge.

Overall, this was maybe an all-time episode of Survivor. Definitely one of the funniest episodes I can remember. It was also extremely well-edited. From everything with Adam to the music to the pre-tribal craziness, the editing was superb and has been all season. Add in a reward challenge and a good immunity challenge as well. This very well may go down as the best season ever when it's all said and done.