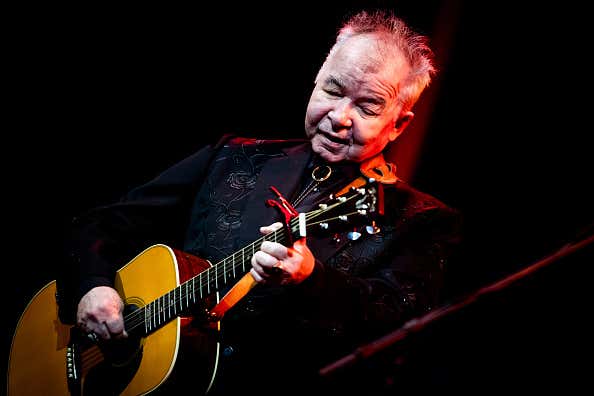 Yesterday John Prine passed away at the the age of 73 from this goddamn Coronavirus. I wrote this blog, and truth be told was not too surprised to get a lot of comments from both A. losers laughing at his death and B. people asking "who"?

The latter is fine. Prine might even say that himself as he refused to take songwriter credit for a lot of the music he wrote and others sang. I noted that his death hit closer to home for me personally because my dad was obsessed with his music. Back when I was really young, like 7-8 years old, my dad would make me listen to him and tell me how great he is and kind of force his music on me. Bluegrass/folk music isn't going to be any typical young kid's cup of tea, but as time wore on I grew to really love his music as well.

But back to William Williams - he saw Prine play in the mid-70s at Park West in Chicago with his brother. To those who don't know, Park West is a concert venue in the Lincoln Park neighborhood that doesn't hold too many people. My dad and his brother were the first ones there, last ones to leave and apparently Prine took a notice to it. When they went to pay the bill at the end of the night, the barkeep informed them that Prine already paid for their entire tab. My dad thought that was pretty awesome and when he turned around, Prine was behind him smiling. They then yucked it up for a while about whatever they yucked it up about. I'm sure my old man was pretty star struck. They had a few more encounters at his shows over the years too.

So when I said this one hit papa WSD hard and in turn hit me hard, it was true. My dad swears there's gotta be a song that Prine wrote out there that perfectly harmonizes that situation. Kinda like a 'Piano Man' type deal, though I'm guessing Prine did that for a ton of his fans. That was just the kind of guy he was.

Now Prine wasn't *quite* the household name that similar artists like Johnny Cash or Bob Dylan are/were in spite of his slew of Grammy awards, but I can promise you this: you may not have heard of John Prine, but you've heard and sang a long to a lot more of his songs than you know. Ever hear this song?

That's right, John Prine in collaboration with his good friend and fellow Chicagoan, Steve Goodman.  Prine just refused to take credit for writing it and gave all of the dues to Goodman.

And Bonnie Raitt, who could be argued as having the very best voice of all time, perfectly covers his song "Angel From Montgomery" in every single way.  This isn't a request, it's a demand; push play on the song below while you read the rest of this blog:

Other artists list him as their inspiration. A-listers like Bruce Springsteen and Kacey Musgraves. It's crazy how much influence he has had on the musical landscape.

I don't care what you say, John Prine could absolutely be considered the greatest song writer of all time. As good or better than Dylan, Cash, Young, Diamond, Joel or etc. No, he wasn't necessarily as commercially popular as the artists I just named, but he was every bit as great a songwriter as each and every one of them and I will take that to my grave, and all you have to do to realize that is listen to his music.

Prine was also a little bit of a Forrest Gump. He was born and raised in Maywood IL, was a mailman, fought in 'Nam, had multiple bouts with cancer, did world tours and more. He just lived a crazy life, and a crazy life that a moron like me can't adequately put into words. I feel somewhat guilty even attempting to encapsulate how much of a legend he truly was.

The good news is that I don't have to. John Prine can do all of that and more with his music. So do yourself a favor, type his name into Spotify and let him tell you his stories himself. You will NOT regret it. In fact, I'll do it for you:

Prine was a complete and total legend. The world lost a great one last night.  One of the best ever, and like I said yesterday, there's not a doubt in my mind he's fishin' and whistlin' in Heaven now

RIP to a great one. This virus is a real motherfucker.