We are in unprecedented times. With millions upon millions of people stuck in their homes, there is nothing to do but look back and reminisce on fonder days.

Sitting down over a room temperature mug of coffee, me and my temporary roommate/ coworker/ co-host/ quarantine partner, KBnoSwag, began to discuss these better times.

I told story after story, each filled with more triumph than the last. As Kyle nodded along, listening to my achievements, records, and real girls that had crushes on me, a noticeable stunning realization came crashing down upon him like a ton of pee-wee wrestling trophies.

There were no glory days for him. No reason for jubilee or celebration.

KB became twitchy, eager for the conversation to end, so he could put his past right back where it belonged, deeply repressed in his DSM-5 diagnosable mind, kept locked away by his many self-destructive vices.

If only it were that simple.

We had also managed to get our hands upon a dusty pile of school yearbooks and assorted photos. Our childhood (1999-2010), was now sitting in front of us, waiting to be rehashed. We dove in. 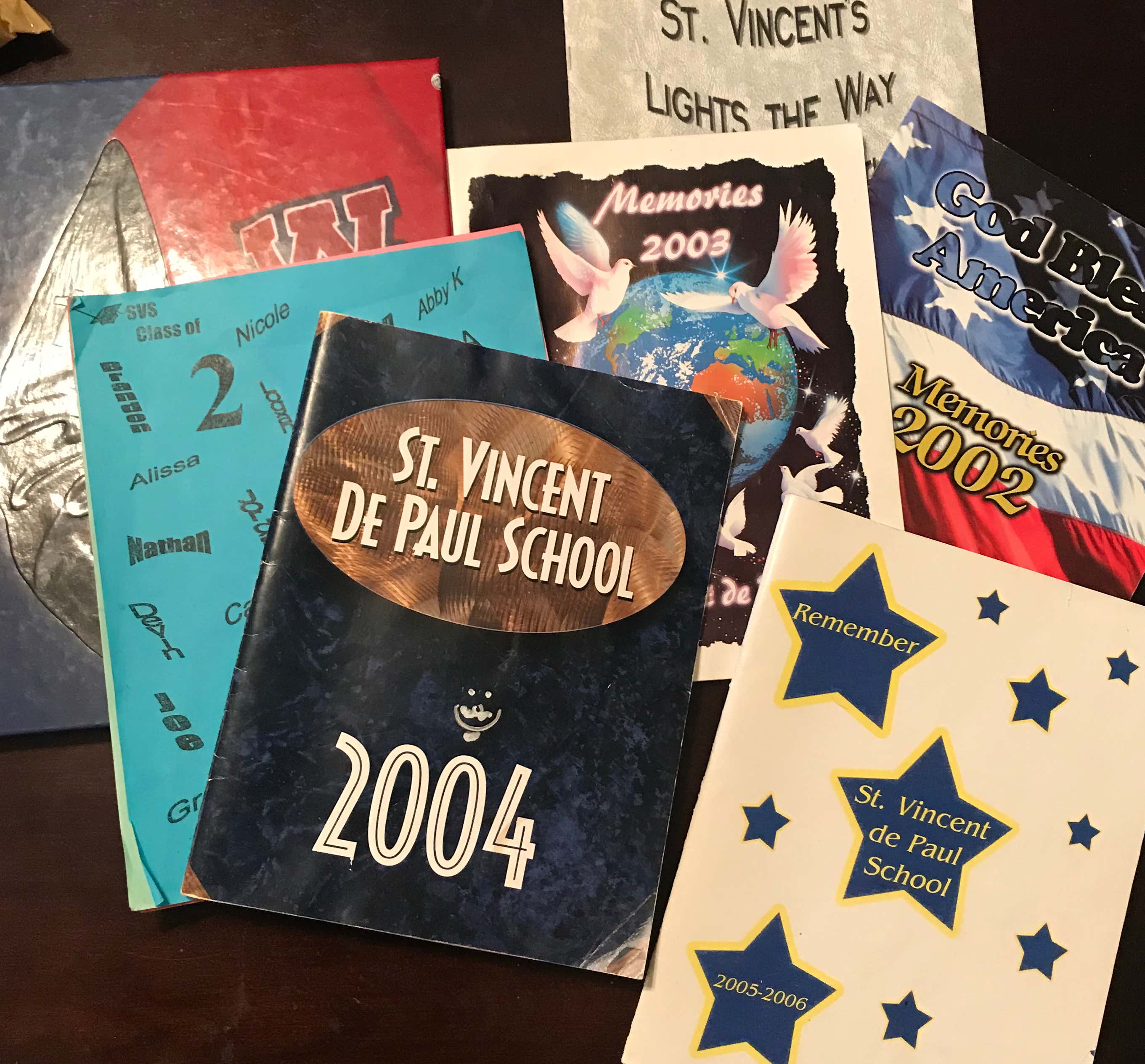 As a challenge to KB, I’ve decided to juxtapose certain topics of our youth next to each other, and unbiasedly assigning a point to whomever wins the category. 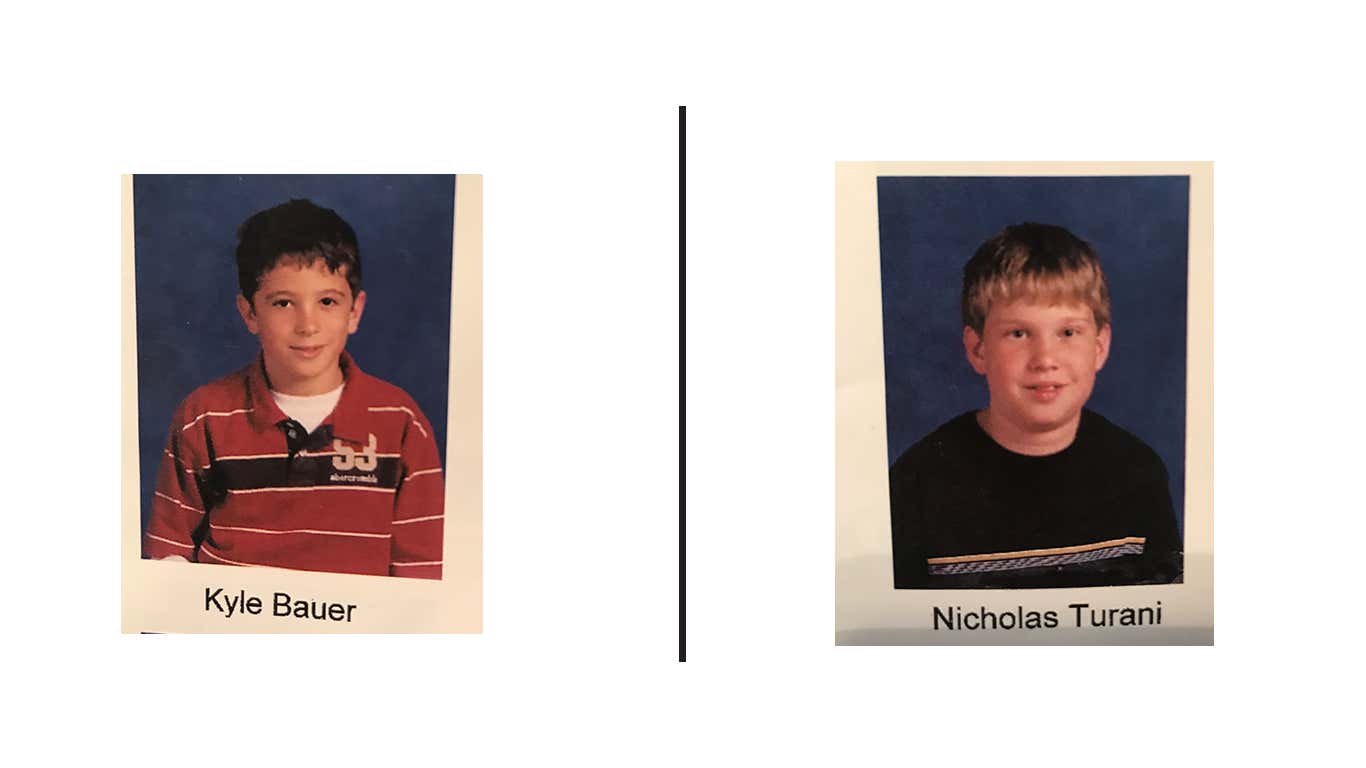 I'll admit, much like an Iditarod musher who's dog had a hormone deficiency, I too was in the market for a Husky T. But as they say, the curvaceous, healthy heft of the boy never matters when he's in the slickest threads.

For this challenge, we will compare our outfits from our homecoming court photos. 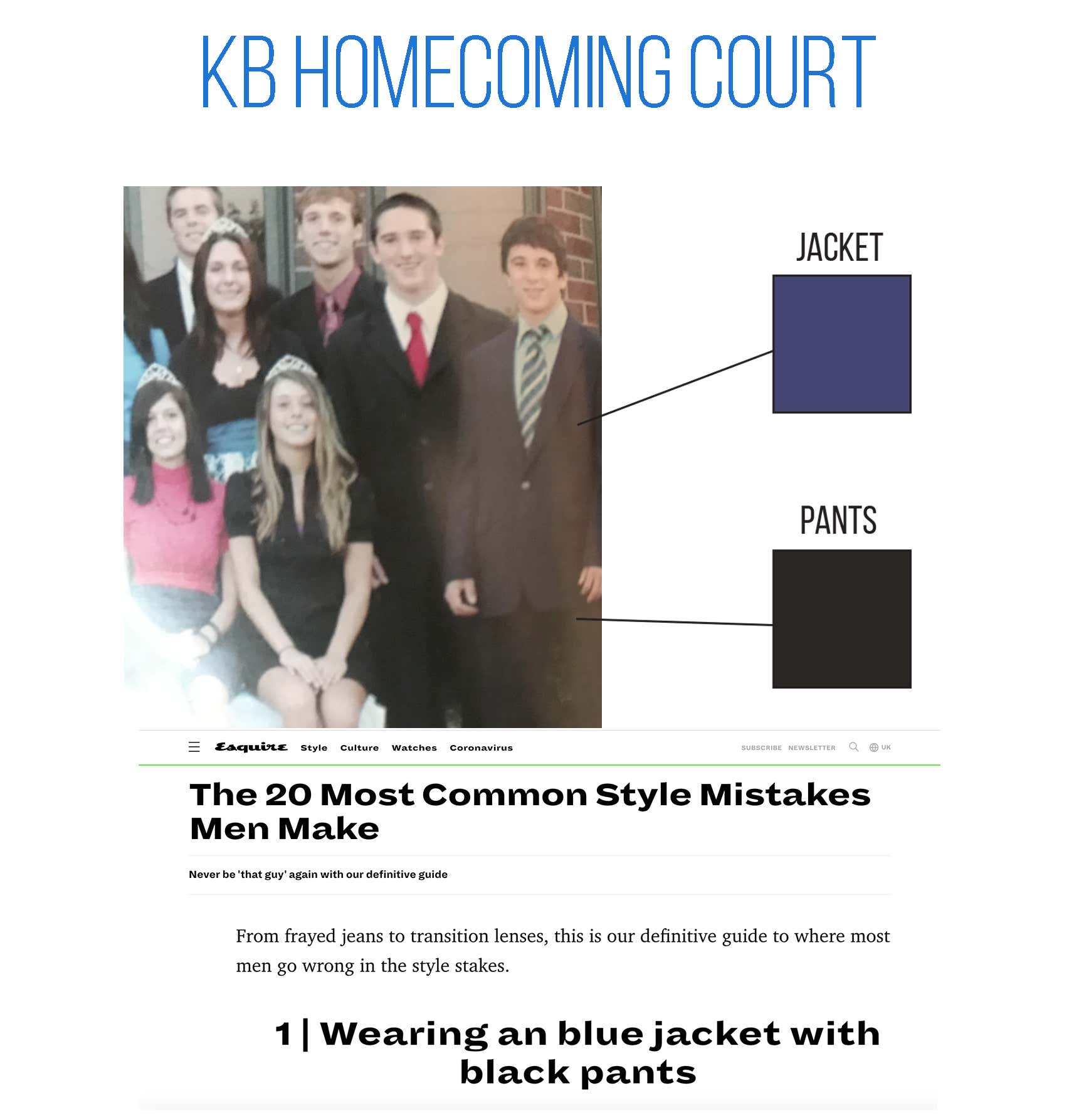 With a fashion faux pas as egregious as this, I don't even HAVE to show my photo from the Homecoming Court I was also voted on to.

A truly badass nickname. Whether a baseball team in Cincinnati, or a swashbuckling, ruggedly handsome pirate, ready to sail the seas for plunder and women alike. Its mysteriousness only added to the cool-factor, as only a select few knew the real reason for the name.

Redlegs actually came to be due to my extreme eczema (legs looked like I trekked through a dust storm on Mars) and I spent most of my free time hunched over, scratching my dry lower extremities.

At recess, as I was sitting watching the fellas play hoops, waiting to sub in whenever the 4th alternate ran inside to get his inhaler, Kyle was THE ONLY BOY playing feminine games, like doctor, with the much older 7th and 8th grade girls.

While Kyle was just a single “sport” athlete, I was dominant in both altar serving, and sitting down while watching my peers play basketball. Also notice I am unable to even sit for a single photo without scratching my arid legs.

At the end of our 9 year stint at St. Vincent de Paul School, we were given an expertly bound collection of memories and, most importantly, our superlatives.

My class of 2006 had 22 total students, and sequentially, 22 awards were given, and upwards of 4 people could win the same title. 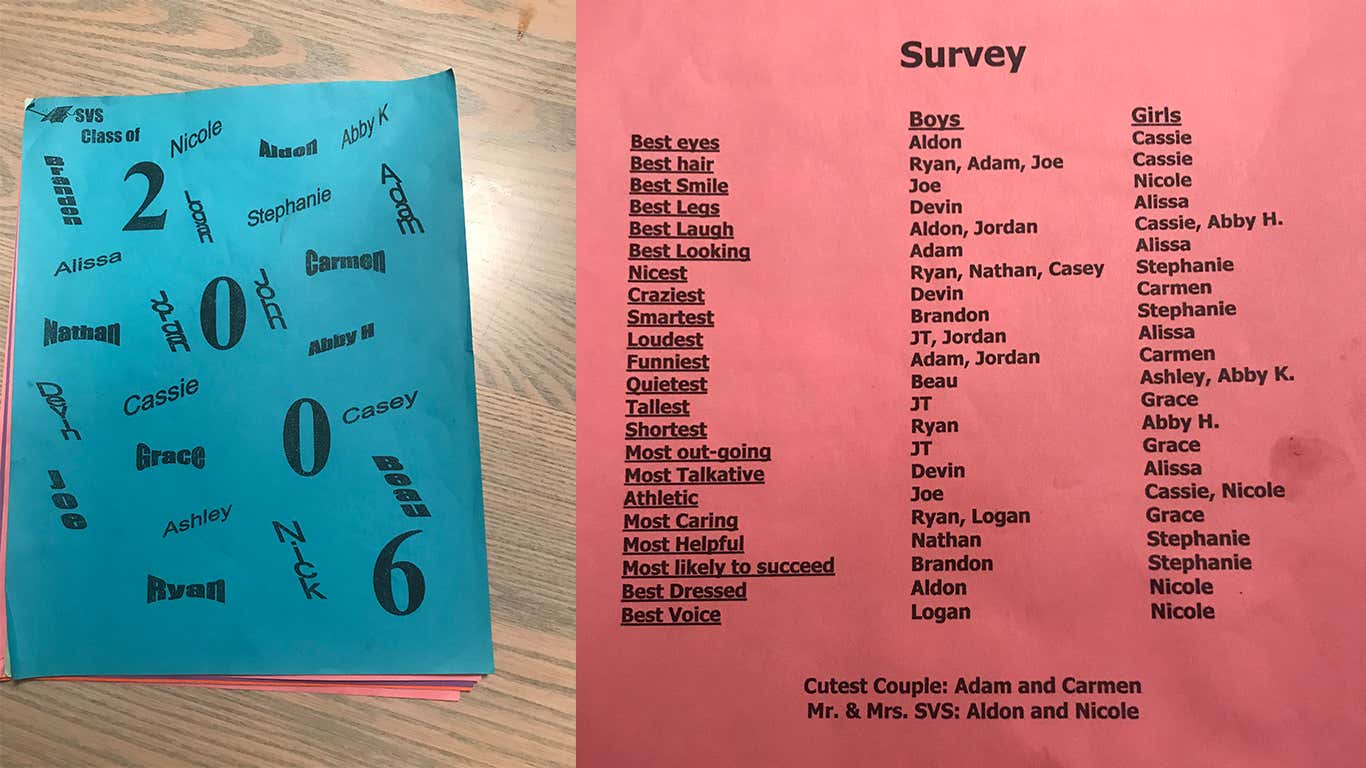 Somehow, with enough awards for every student and them some, due to a clerical error, I had not been chosen for a single accolade. Not that I care at all, I didn't even want a dumb superlative. I'm not one to dwell on the past. This not the reason I transferred to a much less desirable public school, and this is not the reason I have not spoken to any of my former classmates since these were handed out. Just coincidence.

All Kyle needs to beat me on this is a single superlative. 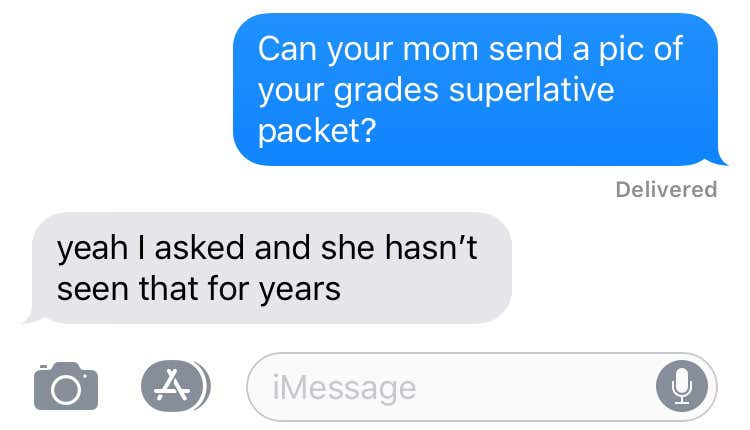 Nothing is more important than family. It's every persons security blanket, safety net, and the people who understand you the most. It takes a mature person to realize that. Where KB and I both stand on this matter is apparent in the last pages of our respective 8th grade yearbooks. 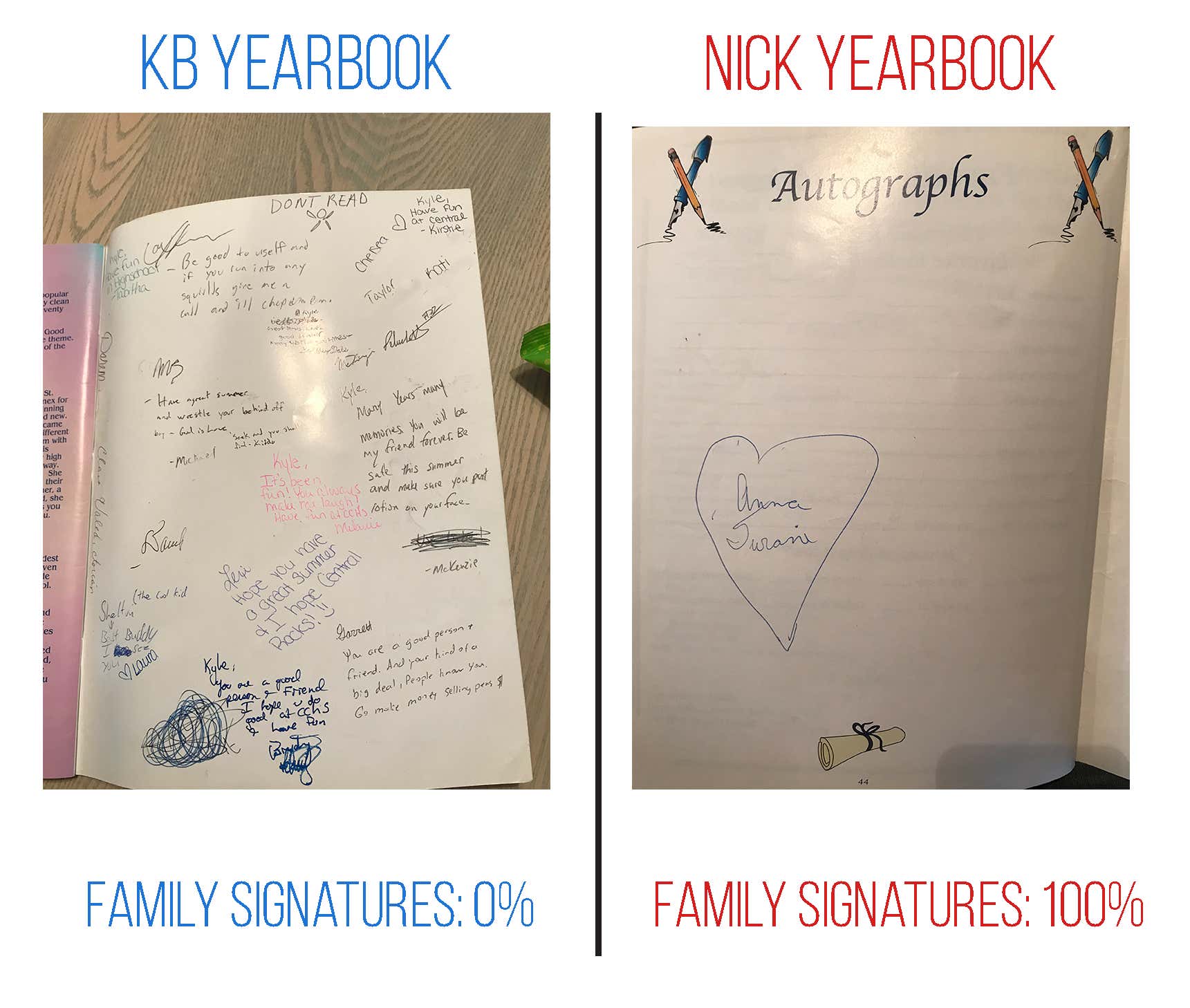 A complete shutout. I can't say I'm surprised, but I was hoping my good friend Kyle would secure just a single point.