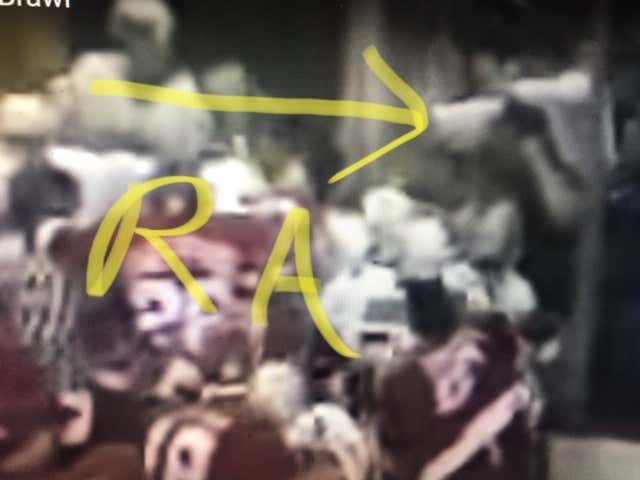 Yes, that's me in the white mock turtleneck and black L.A. Kings hat pounding the glass like Joey Silvera pounds ass. But given the circumstances, I think it was understandable. I was 19 and went to the Bruins/Red Wings game with a few of my boys (what's up Jonesy, T-Bone, and Shaker). We end having front row seats to a sick bench-clearing brawl literally right in front of us so how do I not pound on the glass in that spot?

There was a skirmish at the final buzzer that ended up by the now-open Zamboni doors. Just when it appeared things were quieting down, Bob Probert blasted Steve Leach straight to the mug (2:31 mark) with a sucker shot and rekindled the brawl. Stephane Quintal, God bless him, squared off with Probert and managed to not get killed (which is like a win vs. Probert).

Ray Bourque ends up rasslin' with Steve Yzerman at some point, just a couple of HHOF captains mixing it up back in the day. Oh, and a fan punched Stevie Y as he left the ice.

[omitted name of fan] will return to Municipal Court on Nov. 19 for a status hearing on charges of assault and battery and being a disorderly person, court officials said.

The fan said earlier that he had lied when he accused Yzerman of hitting him with a hockey stick to provoke the fight.

''I figured maybe if I said I got it from a player, I wouldn`t have gotten charged,'' the fan told the Detroit Free Press. ''I feel terrible about pinpointing Steve Yzerman. I think he`s a fantastic hockey player.

''Being caught up in the emotion of the fight, I was taunting the whole team of the Detroit Red Wings. Steve Yzerman stopped. He gave a little smirk and took a step toward me. My first reaction was to hit him.

''I got punched,'' said the fan, who has a black eye. ''I don`t know where the punch came from. I don`t really know what happened.''

But man, poor Jeff Lazaro. Ends up squaring off with Vladimir Konstantinov then somehow ends up getting choked out with his own jersey during the mayhem. That's a tough day at the office.

What I remember most vividly was seeing Cam Neely by the Zamboni doors foaming at the mouth (there was at least one other tough guy in street clothes as well). He was dressed in a suit because he was out injured and was just dying to get involved but knowing if he did, he'd end up getting a healthy suspension. Also, I'm pretty sure I was yelling for him to get in there regardless of the fact he wasn't playing in the game because Boston fan gon' Boston fan.

Probert was initially given a 10-game suspension but it was reversed when the league reviewed tapes provided by Wings coach Bryan Murray. Quintal was also given a hefty suspension that was rescinded as well. He now works in the Department of Player Safety.

I discovered a few months later that this clip was featured on a hockey fights tape from a place in Minnesota so I grabbed a copy to show the boys. And watch over and over again. Now, it's on the Internet forever (although my VHS copy was much clearer).

In total, 82 penalty minutes were doled out. Eighty-two. 82.

"Detroit has set hockey back 30 years with a demonstration like this."