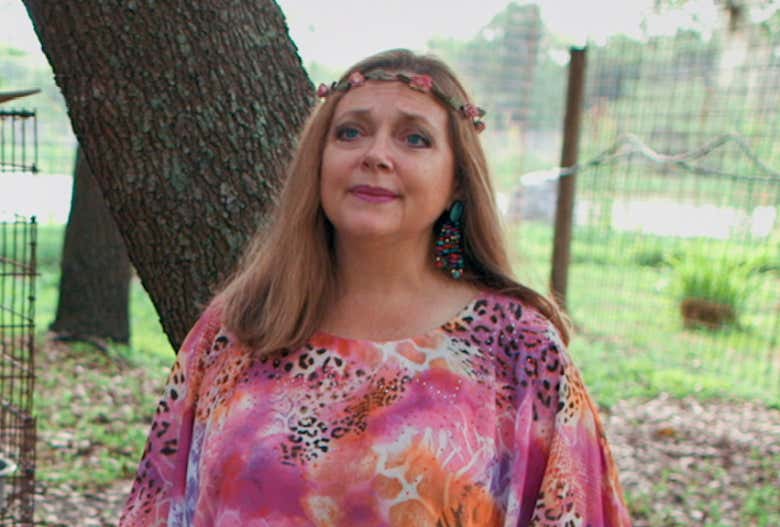 Variety- Investigation Discovery is jumping on the “Tiger King” phenomenon, greenlighting a new program that it bills as the “definitive sequel” to the hit Netflix docuseries.

“Investigating the Strange World of Joe Exotic” will examine the life of Joseph “Joe Exotic” Maldonado-Passage and explore his rival, Carole Baskin, whom Maldonado-Passage has accused of killing her first husband. The limited series is expected to premiere later this year on ID.

In a press release, ID claimed the show will focus on “the investigation you didn’t get to see, revealing the secrets only Joe knows, the exclusive footage that has never been shown and the search to answer the one question every person in America is asking themselves right now: although she’s denied it, is Carole Baskin responsible for the disappearance of her husband, Don Lewis?”

The ID series will be told from Joe Exotic’s perspective, as it asks questions such as whether Baskin orchestrated Lewis’ disappearance to take control of his estate. “No one seems to be talking — except for one man — and that man is the center of ID’s upcoming investigative series,” the network said.

What do we have here, cool cats and kittens?  Look, I'll be the first to admit that Joe Exotic is nowhere near an angel and his fame is merely a product of living in a society that places entertainers above morals, especially when we are all quarantined during a global pandemic. But Carole Baskin and Jeff Lowe essentially walking away as the two clear winners from Joe Exotic's documentary just feels wrong. I'm not sure if we can trust the pudgy jet ski dude when he said Jeff Lowe will get his from the US Justice System down the road. But I've never known someone who looks like this to tell a lie.

Which leaves us with Carole Baskin as the only member of the Big 3 to emerge relatively unscathed (Doc Antle isn't in the Big 3 but I know enough about cults or whatever you want to call places that make you call another human a word for Lord to know he's not going down anytime soon).

That is potentially until now. The Tampa police have already let it be known that they are coming for whoever killed Don's ass and have already asked for the help of the millions of detectives known as Internet Users.

And now Discovery is doing a full-blown investigation sniffing around for Don Lewis like a tiger sniffing sardine oil. Will Carole be on the Hot Seat or Cool Throne? Only time will tell. But after we watch this series in month whatever of quarantine down the road, I'm pretty sure our minds will be made up for good one way or the other.

The craziest shit of all is that I feel like Joe Exotic would trade his freedom if it meant Carole Baskin lost hers like some kamikaze pilot or suicide bomber. I feel like once you create multiple diss tracks and videos of you blowing up someone's likeness, their demise is worth substantially more to you than your own happiness. Add in that Joe Exotic is somehow the hottest person in the internet streets and the events of the last few years would be a trade the Tiger King would make 1000 times out of 1000.

So one last word for "whoever" caused Don's potentially sardine soaked body to disappear before this Discovery series airs:

P.S. For the record, I wouldn't mind it one bit if all the heavy hitters from Tiger King ended up in jail for one reason or another. We have enough crazy in the world as is right now so there's need for for any extra crazy to be walking around and capitalizing on their newfound fame whenever we can start leaving our houses again.