Sexton likes the make-up of the Cavs and when asked about the future, specifically when the Cavs are going to get back into the playoffs, he grows bold.

I know everyone is going a little bit crazy with the quarantine and everything going on, but let's not lose our marbles here, Collin. Did I miss something in the NBA over the last couple weeks? Because the last time I checked the Eastern Conference standings, I had to scroll pretty far down to find the Cavs. Scratch that, I actually had to scroll all the way to the bottom. 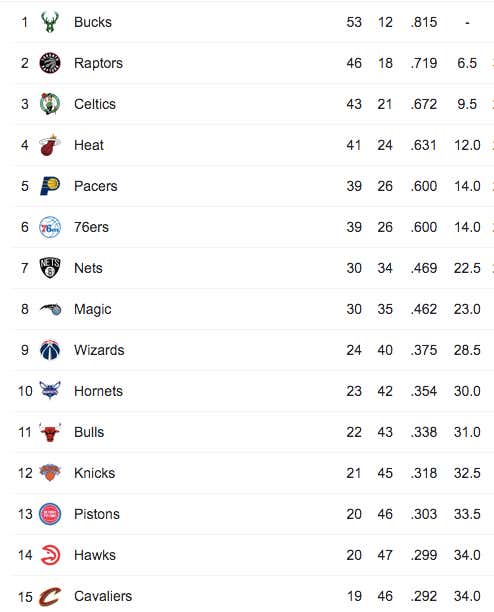 The only team with a worse record this season is the Golden State Warriors (remember when we played in 4 straight Finals?), and they've been without Steph Curry and Klay Thompson damn near the entire season. They'll be back next season. But who exactly is coming back for the Cavs next year that is going to draw us within the 34 games back threshold? I mean, we're 11 games out of the 8 seed, and even the 8 seed is 30-35. My math shows me that this team STINKS.

Yeah, I do like our young talent. But at what point do we just flip the switch from tanking to being good? It's not like we're going to pick up a marquee free agent to take us to the next level. The team that is 19-46 this year is going to be the same team we take into next year. And probably losing Andre Drummond! So how are we getting substantially better?

I'll give Sexton this: if by some grace of God, Andre Drummond decides there's enough money on this Earth to get him to resign with Cleveland, there is a chance that this team contends for the 8 seed next year. Garland, Sexton, Osman, Love, and Drummond can go 40-42, right? But what does that get us? A non-lottery draft pick, and we're still not getting anyone to come here.

Look, the only reason Cleveland has ever been good in today's NBA is because a genetic freak was manufactured in a labratory about 20 minutes outside of Cleveland. LeBron never comes back if it wasn't his hometown team. And the way the world and the league works, we're screwed from here on out. I don't think the Cavs will ever be good again. Ever. We had our little run and it was fun and we even got a championship out of it. But now it's time to focus on baseball and football, Cleveland.