This week was supposed to be the awesome combination of the national championship (tonight) followed by Masters week. As you know, that isn't happening. Today, some good news finally came across the wire as The Masters officially rescheduled their iconic tournament the week of November 9th.

We all knew that the rescheduling of sports events was going to cause some chaos, but The Masters was going to be the toughest. How would The Masters, located smack dab in the middle of SEC Country, going to find a weekend that works? Well, they found a way: 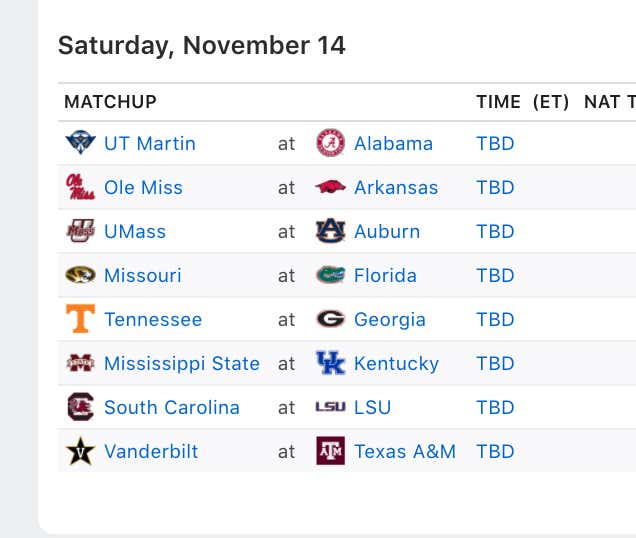 Tennessee @ Georgia could be a big game if Tennessee somehow outshines their expectations, but outside of that, you have a whole bunch of blah. I'd assume UT @ UGA will be played at night or at noon, so it doesn't carry over to primetime for The Masters on CBS. This is pretty much Tin Horn Weekend for the SEC West with Auburn taking on UMass and Alabama taking on UT Martin.

It'll be interesting to see how the NFL/CBS handles Masters Sunday. That is if we even have an NFL season. I'm just assuming we will. Speak it into existence. Positivity over negativity y'all.