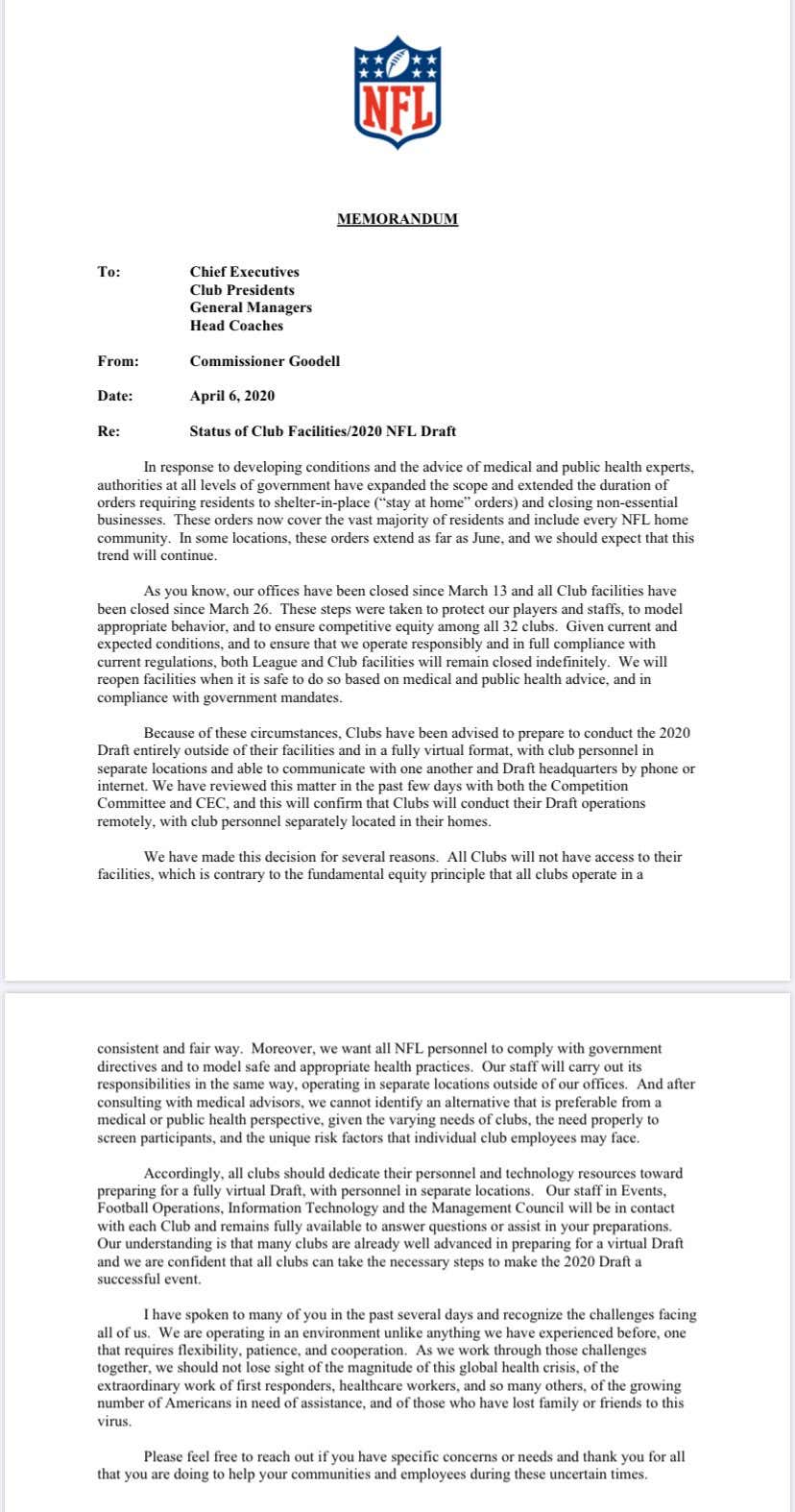 Oh fuuuuuuuuuuck yeah. If you thought watching a bunch of nervous, hungover, yet still super athletic 20-somethings get on a raft in the Bellagio fountain in the middle of the Vegas strip had a chance for hilarious misfortune, just wait until a bunch of Football Guys that have spent their lives fighting against technology have to conduct the biggest weekend of their year completely on the computer and apart from everyone else on their team.

Everything is on the table right now. The Bengals missing the first pick of the draft because their Zoom Meeting dropped after 40 minutes due to Mike Brown refusing to upgrade to the Pro version. A team (most likely the Browns or Redskins) drafting the wrong player with the same name like fantasy owners used to do with the two running back Adrian Petersons back in the day. Bill O'Brien drafting in his underwear without knowing the camera is on. Andy Reid eating ribs. Jerruh picking whoever the fuck he wants because there is no War Room to reason with him. Jim Irsay not showing up until Day 3 with an empty brief case and bloodshot eyes. Big Cat and the Spiral Ham gang crashing some poor team's stream. And the Giants auto drafting the fourth pick because Dave Gettleman's four computer folks are literally just random dudes from the Geek Squad and they can't figure out why his picks aren't going through (Likely because he is using the Wii he scouts players on to make his picks).

The potential of mayhem and unintentional comedy that can occur during the only sports event is through the roof, which means the real winner is all of the fans watching at home. Or at least the ones whose teams didn’t completely fuck up the virtual draft.

Oh yeah and the other winner is of course the Patriots because you know for all the Instachat and Snapface mumbo jumbo Bill Belichick has been spewing over the years, you know the HC of NEP not only has burner accounts on every social media account a player may go on but also has been working with Ernie Adams on to have the best conferencing software money can buy that even All Business Pete's internet couldn't fuck up.

P.S. I am going to miss the cut ins to each team's war room that likely smells of stale farts and pizza as everyone awkwardly claps about whatever pick they just made. I guess I'll just have to watch this awesomely awkward clip instead.