I must confess... I'm a bit stuck in the 80s and 90s. I just can't seem to let movies, tv shows, music, crimes, toys, and trends (Blockbuster!) from those decades go. I don't know if it's the nostalgia from my youth or the general familiarity, but I am of the "they just don't make them how they used to" mindset.

I miss the excitement of lining up outside the Ticketmaster office at the crack of dawn to get Backstreet Boys tickets. I miss strolling through the aisles of Blockbuster, physically seeing hundreds and hundreds of movies, and reading the back VHS boxes for the synopsis. I miss the rom-coms and teenage movies that were made in that time period that aren't really made anymore. I miss (and recently binge-watched) family sitcoms like Family Matters, Step-by-Step, and The Fresh Prince of Bel-Air and the sentimental music that dropped every time mom/dad/uncle/family member stepped in to preach a lesson and tell the kid they fucked up but they loved them anyway. I would say I miss the music from that era, but it's kind of still the only music I listen to. I could go on and on.

The only problem is because I experienced all of the movies/music/etc in the 80s and 90s, it's hard to take them in with fresh eyes. My past is prejudice towards their greatness and I tend to not see what I might see if I were experiencing them for the first time.

Which is exactly what happened Sunday afternoon when I watched The Little Mermaid for the very first time, after having previously seen it a thousand times.

This was my favorite princess?!! Ariel turned her back on her entire SPECIES for some dude who fell off a ship and happened to be the first man ever saw up close and personal. Granted, he's crazy hot, but this bitch doesn't know what hot is for a human because she's never been around one! "Fuck my family and all the love and care they've given me! Ima take my 16-year-old ass to the sea witch and get me my mans! So what if she wants my voice? I don't need to talk, my looks will get me where I want to be." This is what we're teaching young girls???

Who knows, maybe Disney was counting on young girls being complete morons, like me, who are too blinded by bombass songs to see the protagonist for who she really is. Then again, I'd love to blame it on my innocent, child eyes, but that would be a lie; I've definitely seen this movie many times as an adult and I don't think I ever realized this. In fact, last year I somehow defended her! Wtf!

The important thing is, though, that I'm finally awake. Wide awake. So much so that now all things 80s/90s are on the table for the truth, starting with a song I used to jam out to that happened to play on shuffle only hours later...

My mind's tellin' me no, but my body, my body's tellin' me yes
Baby, I don't wanna hurt nobody
But there is something that I must confess (to you)

I don't know what I was thought that song meant when I was little, but I know I used to sing along every time it came on the radio. How fun for my mom! I'm sure hearing her 7/8 year girl sing about getting it on the dance floor so you can later get it in bed, made her really proud.

Then, of course, there's hearing "my mind's tellin me no, but my body is tellin me yes" from this man:

Absolutely disgusting. When I first made the connection years ago, I was shocked. He was telling us and we just sang along in the car! A lot more than we thought…

So it goes without saying that this song is about him. And the lyrics? Well, they're so… inappropriate, I don't even feel comfortable typing them in here because it turns out, age truly ain't nothin but a number to Kelly. 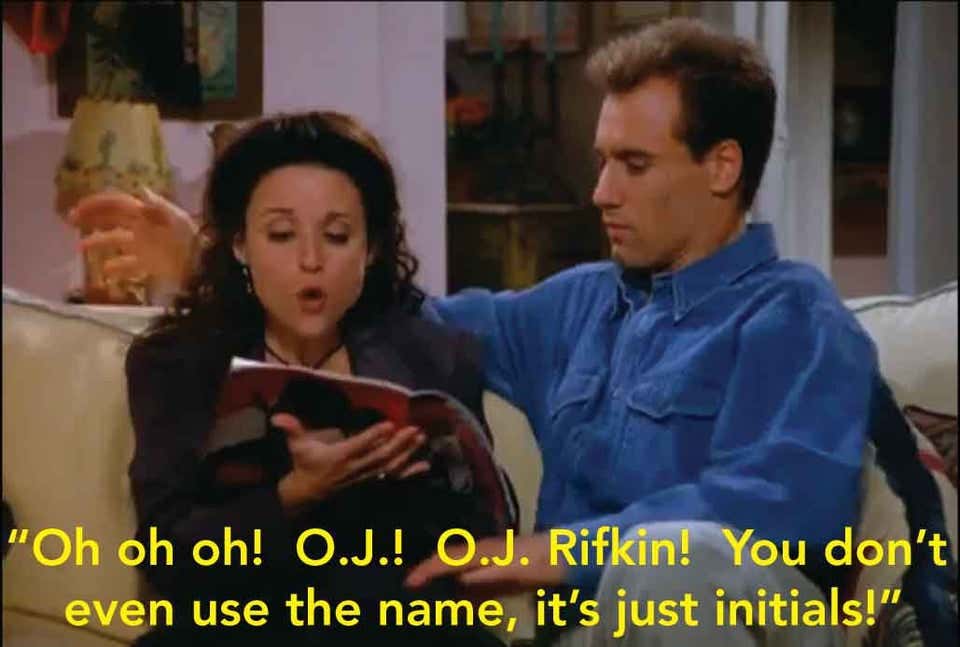 In this episode of Seinfeld, Elaine is dating a dude named Joel Rifkin. "Joel Rifkin" also happens to be the name of a real-life serial killer who murdered about 17 women in the 90s, when this show was on. Naturally, Elaine doesn't want to date someone who shares the name with a murderer, so she's trying out new names for him and O.J. just so happens to be one of them!

Lol, replacing one murderer with another murderer person accused of murder - that Larry David did it again!

Or so I always thought.

It turns out that episode aired BEFORE the murderers of Nicole Brown Simpson and Ronald Goldman even took place. It wasn't the joke at all, just an ironic coincidence that kind of aged well, but not on purpose. Definitely makes it less punny and more creepy.

Live-streaming a girl taking her clothes off without her consent? Nope. Can't do that. This is obviously crystal-clear now, but I didn't think that when I was 13 and first saw it. I just remember being extremely embarrassing for her because she has to go to school knowing everyone has seen her naked and stuff. Everyone. I didn't think much about the assholes that did that to her. Yikes.

And how about all the premiere characters of my youth who turned out to not be exactly like their characters.

Honestly, there's unfortunately too many to mention, so I'll end with one of the biggest non-regrets of my childhood: Beanie Babies. People were fucking scooping Beanie Babies up like they were gold. I'm talking spending thousands and thousands of dollars on them. Everyone said one day they would be worth SOOOOO much money, it was considered more of an investment than just a toy. (I still remember when the Princess Di BB came out, people absolutely lost their fucking minds!)

Well, I had two and they were from McDonald's. My mom didn't have money to spend on that shit and I was always secretly sad, not because I thought they were cool and liked them, but because I wasn't securing my financial future like everyone else.

Thanks for putting it so perfectly, Wall Street Journal!

And mom, thanks for never listening to me.