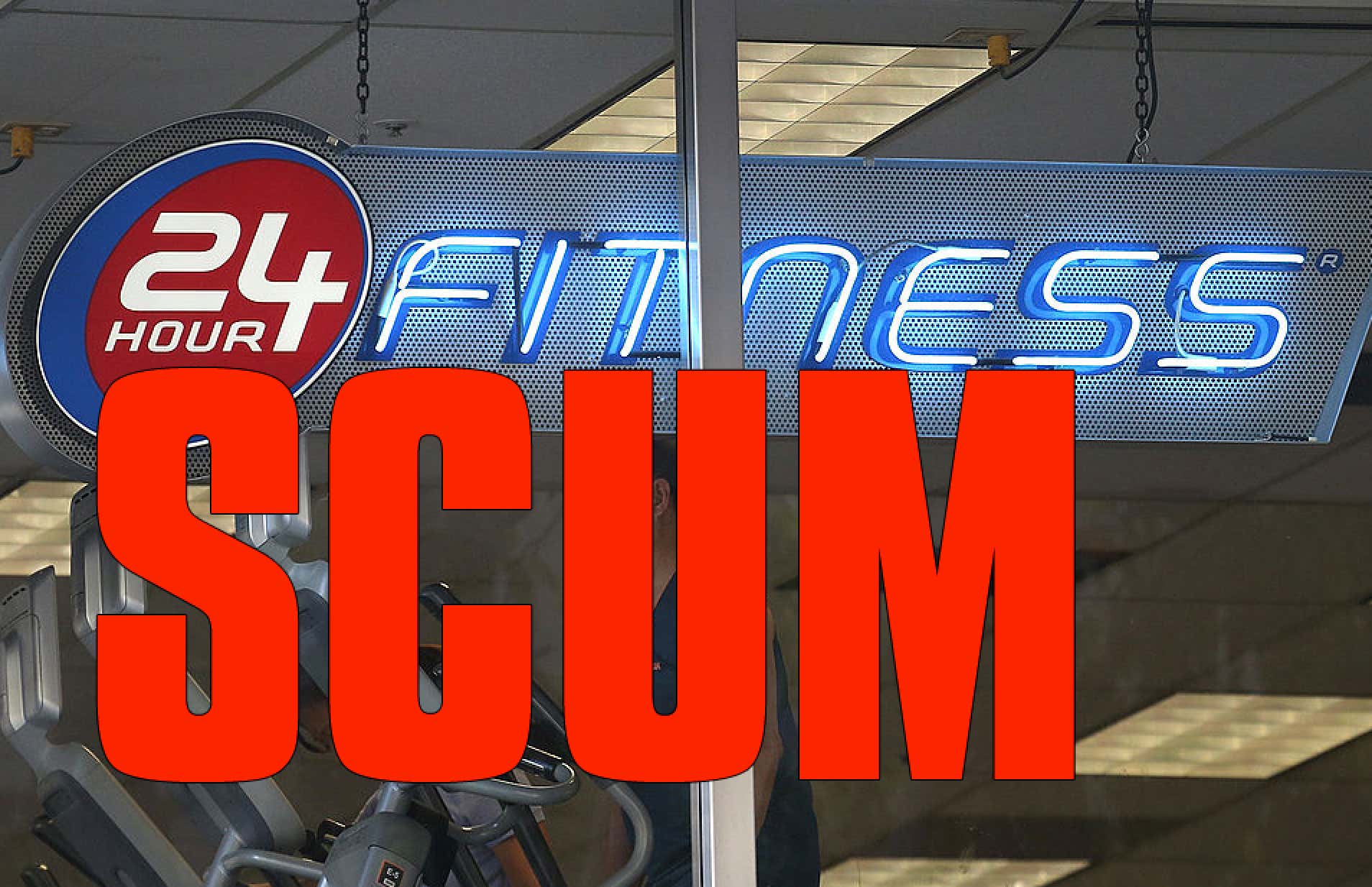 Today I woke up, had a nice yawn, cracked my back into a million pieces, and started catching up on the world news I missed while asleep. Everything is still awesome, as I knew it would be. The market then opened so I checked on my stonks and gave myself a big high-five because everything is in the green so far today (knock on wood). That's when I then went over to my bank account because I remembered I had a credit card bill due soon. It's due on April 8th. So I start looking at my bill and I'm stumped- why is 24 Hour Fitness charging me?

They haven't been open for weeks, nor will they be open for weeks. This doesn't make sense at all. Why are they charging me for April?

So then I went back. What happened in March? The news…it might shock you!

Confused but still trying to stay optimistic, I typed "24 Hour Fitness" into Twitter and saw what I should have expected- everyone who is a member there is getting charged, despite all the gyms being closed.

Some news outlets have picked up on 24 Hour Fitness shady, scumbag business practices

And here is where it gets even more scumbaggy- 24 Hour has decided they will add the time you are being charged for now to the end of your membership. So if you want to cancel because they are being scumbags and charging you when you're closed, you won't even be able to use the time later. It's so insanely devious to operate like that it blows my mind.

It doesn't stop there though. 24 Hour Fitness is just an all around terrible, shady, bullshit company. The gym I go to in NYC everything is dirty, broken, and disgusting. And I'm not just saying that, other people at Barstool have gone there and seen it. Rows of machines just broken at the same time. Dirt filling the cupholders.

This isn't from the gym I go to, but here are 8 treadmills in a row that are out of service. 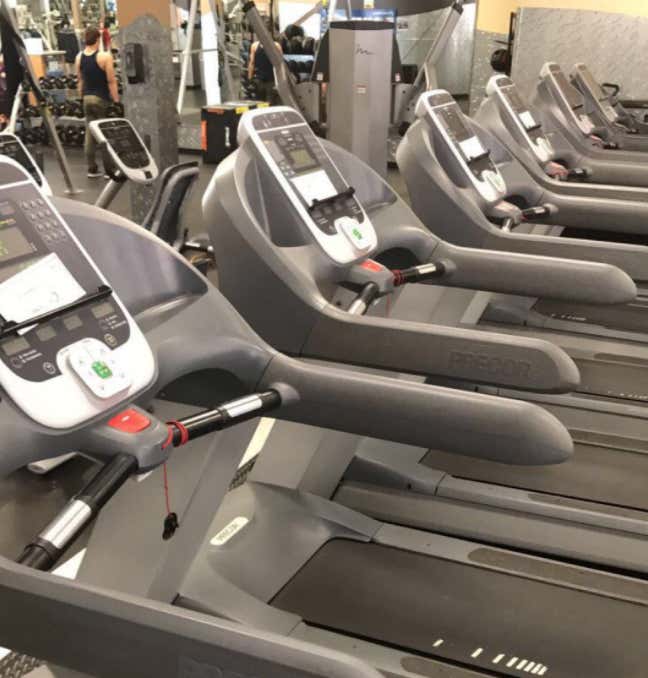 They are paying full time employees for ONE WEEK and then "allowing them to use vacation days" for extra income. Dead fucking serious. And what about other employees? It's worse:

Part time or "seasonal" employees get nothing. Unbelievable.

So to recap: you are getting charged, you can't cancel, all the gyms are closed, and they aren't paying their employees. If you cancel once they re-open you won't be able to use the accrued time. But wait, how are these people still working out? 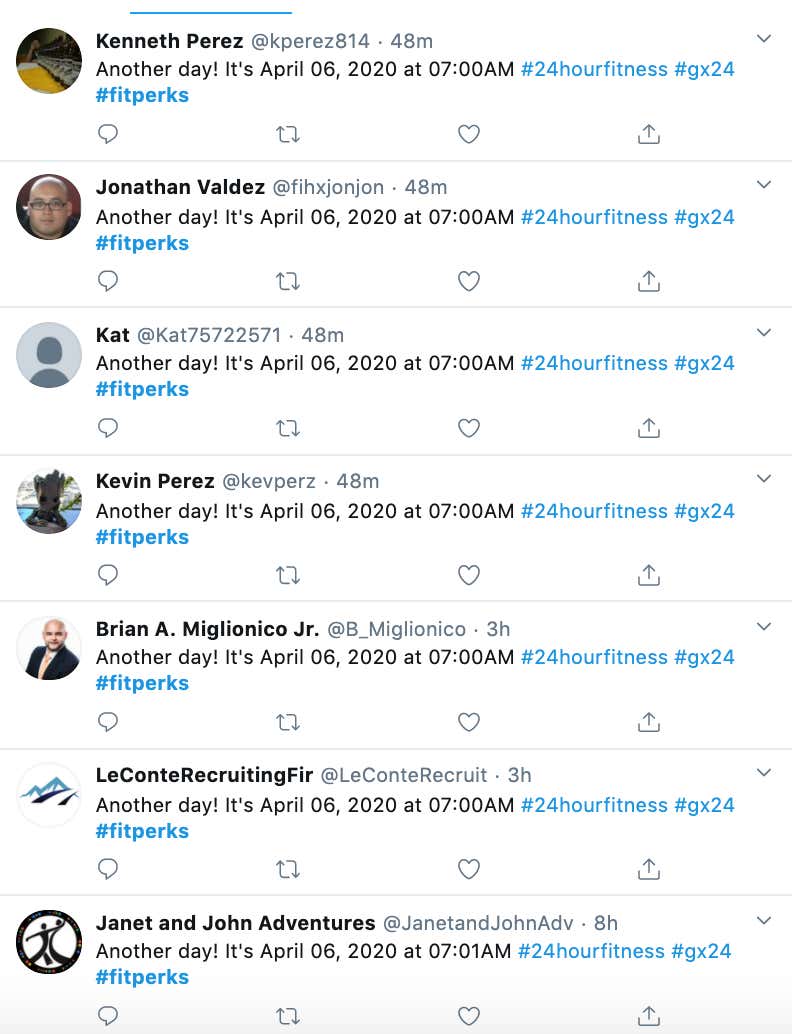 This scumbag company pays for Twitter bots to use their stupid hashtags. Because OF COURSE THEY DO. Honestly, this offends me more than them continuing to charge their customers despite being closed. I cannot in good conscious continue to work out at a place that uses Twitter bots to say #fitperks. That's where I draw the line.

So hey, hope it was worth it you scumbags. My new life goal is to never let people forget how terrible of a company 24 Hour Fitness is. Absolutely disgusting business practices. Good day, 24 Hour Fitness. I said good day!