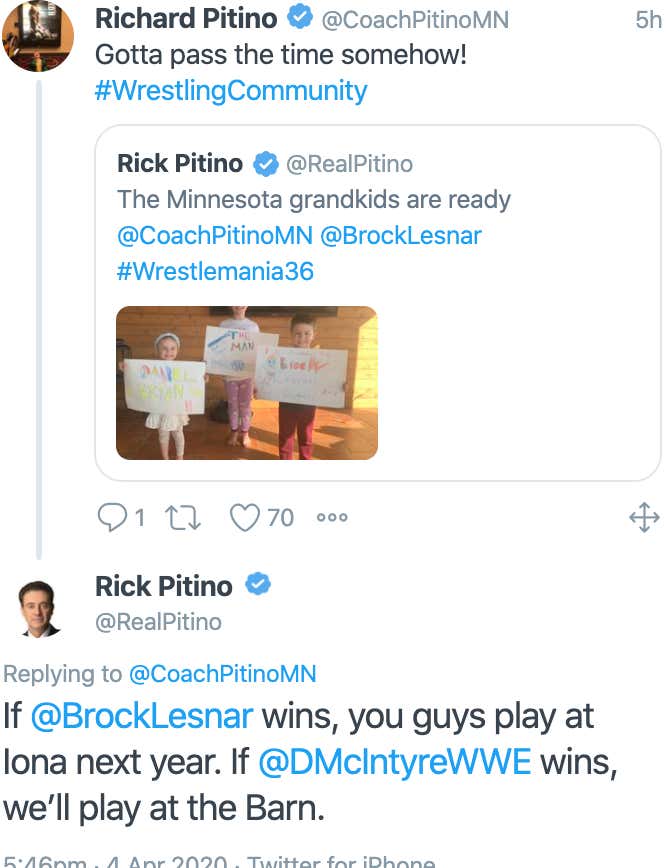 If you're not down with this I got two words for you.

You combine college hoops, the WWE and a bet? Well buddy, you have my attention and you get a blog. I couldn't be more interested in Brock Lesnar vs Drew McIntyre in front of no fans right now. Imagine Minnesota heading to Iona in a father/son match. This has a little Vince/Shane McMahon to it. You're telling me you can't picture Rick doing the Vince walk?

Rick is smart too. He knows that there's a good chance Lesnar is going to win. He tried to sneak that one by Richard.  Last night we saw a bunch of faces win in front of no fans. It hasn't been a terrible Wrestlemania in terms of matches (the Kevin Owens/Seth Rollins and Kofi Kingston/Jimmy Uso/John Morrison fights were legit awesome) it's just different. But now we have a little college hoops scheduling bet put in.

My only requests are they go live during this talking shit to each other and they HAVE to make this game happen. No take backs, it's an American rule. The other one is they have to bring up this match during the game. Have Lesnar and McIntyre sitting there, have them cut promos, get weird with it. We don't have shit else to bet on, so at least give us this.