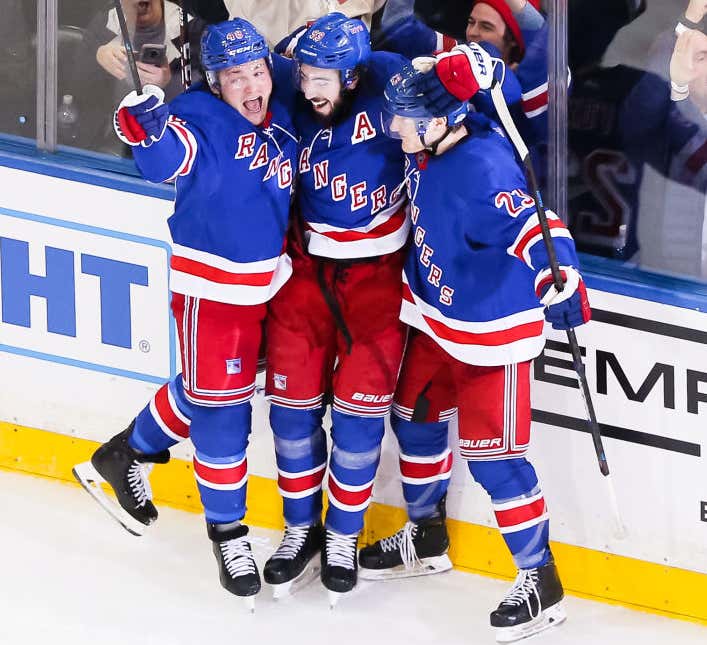 It's been three weeks since the New York Rangers stole a point against Colorado & remained in the midst of an eighth-seed battle with Columbus, the Isles & Florida. Zibanejad lit the lamp for the 17th time in 13 games, Shesterkin returned from injury & was in prime form the night before and Chris Kreider was already on skates signifying an early return from his ankle fracture. With 12 games left and a sizeable tiebreaker advantage over the two Metro teams they were chasing, the home stretch was shaping up to be a blast. Then all of a sudden - POOF - the season was gone.

Thanks a lot, coronavirus...

I'm not gonna let COVID take this day away from me though. Today was supposed to be Clinch Day, and it was gonna be a Clinch Day for the ages. It all started last night when the Jackets had an opportunity to wrap up the last playoff slot in Carolina but lost, ending their season with 94 points. The Blueshirts came into today's MSG matinee vs the Hawks with 92 points and, thanks to a Shesty shutout, leapfrogged CBJ due to the regulation wins tiebreaker...which is gonna be a theme here on my hypothetical Clinch Day.

The Panthers had been going win-for-win, but once the Rangers put away Chicago in 60, their eventual win against the Caps left them victim of the same tiebreaker. Finally and most enjoyably, the Islanders went into a home matchup with the Devils needing a victory of any kind to end the season with 95 points & eliminate their rivals. Instead they dropped a 10-round shootout, rendering their 94 points meaningless in the most gut-wrenching way possible. A four-way tie at 94-points for one last playoff invitation and THE RANGERS ARE IN!!!!

Listen, just because something didn't happen doesn't mean it wasn't going to. During an unprecedented time of uncertainty there's one thing I have no problem guaranteeing - the Blueshirts were absolutely, positively punching their postseason ticket today. So if you're wondering what to do tonight in yet another day of quarantine, the answer is simple. Celebrate. A lot. Celebrate so much you FaceTime your best Rangers fan friends and are so hammered you start confidently breaking down how NY has a chance to upset the B's. Make it real. With any sort of season continuation looking more & more improbable we're apparently not gonna have any hockey until 2020-21 kicks off. So send this Rangers season out with a bang on Clinch Day.

What else do you have to do?