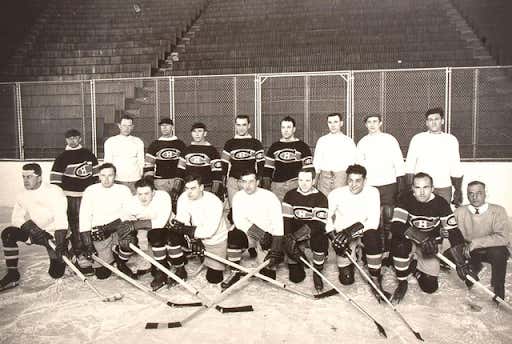 The 1929/30 season was transformative for the NHL as forward passing was allowed for the first time in the offensive zone. In addition, the puck had to pass the blue line before an attacking player, giving birth to the modern offsides rule. The new rules suited the Boston Bruins. Coming off their first Stanley Cup, the Bruins posted a 38-5-1 record, with a record-breaking 14-game winning streak along the way.

Coached by Cecil Hart, the Montreal Canadiens posted a record of 21-14-9 to finish second in the Canadian Division. In the first round of the playoffs, the Canadiens beat the Chicago Black Hawks 3-2 in an aggregate goal series. The Canadiens won the opener 1-0 in Chicago. The Black Hawks would have had a 2-1 win In Game 2. However, the game went to overtime, with the winner of the series being the team that scored. It would take three overtime periods for the Canadiens to win on a goal by Howie Morenz. In the semifinals, the Canadiens won two straight over the New York Rangers.

The playoff format of 1930 had the first-place teams of the American and Canadian Divisions playing simultaneously to the quarterfinals and semifinals. The winner would go on to the Stanley Cup Finals. While all other series were best of three or total goals, this series was a best of five games. The Bruins would beat the Montreal Maroons in four games, as Dit Clapper had a big series with four goals. Marty Barry also had a big series for Boston, scoring two goals in the clinching game.

In the regular season, the Bruins won all four meetings with the Canadiens. In the opener in Boston, the Canadiens were able to shut down the Bruins offense, winning 3-0 as George Hainsworth earned his third shutout of the postseason. The series was a best-of-three, meaning the Canadiens needed to win Game 2 at home to capture the Stanley Cup. The Canadiens jumped out to a 3-0 lead in the Game 2 before Eddie Shore finally got the Bruins on the board. Howie Morenz scored in the second period to give Montreal a 4-1 lead. The Bruins would score twice in the third period, but would not get the equalizer, as the Canadiens won 4-3 to win the Stanley Cup.