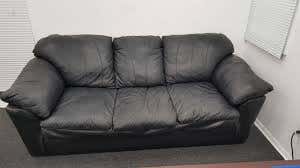 The US Sun - The Free Speech Coalition announced that the hold should be lifted on March 31.

The FSC said: "While most adult sets are small and already use extensive sanitization and other safety precautions, we are following the guidance of state and local governments in hubs like Los Angeles, Las Vegas and Miami to shelter-in-pace and close non-essential businesses.

"We've currently set the voluntary production hold to end on March 31, but that's dependent on whether we've effectively been able to flatten the curve.

"In the meantime, we've set up an emergency fund to help performers pay bills, buy groceries and survive what might be an extended shutdown."

The Free Speech Coalition is a fancy way of saying the organization that defends your American right to get plowed on camera for fair wages. Like the players union for Major League Baseball or the American Podiatric Medical Assocation, its primary function is to represent the collective interest of its members, usually in the form of lobbying and negotiations. And right now the PR team at the FSC is putting on an absolute fucking clinic on how to responsibly spread awareness amidst a global pandemic.

Turn on any news channel right now and you'll be embarrassed with some form of our government. Or media. Or both.

We got people clamoring for the economy to start up and bring death. In the other corner we got people who don't want to die. But we also have investment funds that are getting crushed. Businesses are going under. Your uncle's bar still owes property taxes. Supply chains everywhere are all sorts of fucked up. And all along the way the message keeps changing and couldn't be more obscure. There's so much uncertainty from seemingly all aspects of society: government, work, play. You name it and we don't know what's going on.

Now open up those trade routes and start fucking. The world is literally watching.