Just because the NBA season was stopped abruptly doesn't mean that the NBA Awards season stops abruptly. As an elected official of NBA Voters Association People Group (NBAVAPG), I feel it is my duty to bring you my ballot exactly the way I mailed it in...or would have mailed it in should the season miraculously continue at some point.

Thoughts: Before you find yourself getting angry at this, remember that it is the all-rookie second team and no one cares. There will be several selections later where your anger will be justified. Patience.

Thoughts: He vs. Zion was a great case. Zion was clearly the better player when both were on the court. Ja played more than three times as many minutes and did it for a team that still had a solid grip on the eighth seed. I'm not sure what the threshold of minutes/games played for Zion where I would have been comfortable giving him the nod, but I know it's more than the 19 games he appeared in.

Thoughts: Not sure who the head of the snake here is so they can all share the award. The "luring Kawhi Leonard and having him lure Paul George" move was a touch of magnificence. Sean Marks (Brooklyn) is honorable mention here, as the point of his job is to attract multiple All-NBA players to your organization and he got two to sign on the dotted line. What happens after that isn't his business. Jon Horst (Milwaukee), Rob Pelinka (LA Lakers- hey for all the bullshit it took, he got his man and it was working like a charm) and Masai Ujiri (Toronto).

Thoughts: Nurse lost the reigning Finals MVP, replaced him with an undrafted Terence Davis and was on pace to win more games this year than he did with the Finals MVP guy. Seven of their top eight guys in minutes played missed at least 11 of the 64 possible games and the Raptors kept chugging to the second seed in the East and the third-best record in the entire league.

Thoughts: Lou Will started four times as many games as Harrell this season. They essentially tied in PPG (18.7 for Lou Will, 18.6 for Trez), and Harrell shot better from the field, got to the line more and was a much better defender. I give him the nod this year.

Most Improved Player of the Year: Luka Doncic (Dallas)

Thoughts: There are so many ways to take "most improved" and I'm never sure which one is the in the truest intent of the award. There are guys that improved from either out of the league (Melo) or on the fringes of being out of the league (Ben McLemore) to becoming solid starters or rotation players. There are guys that go from a solid piece to a solid starter (Graham) or solid starter to All-Star (Adebayo/Ingram). Then the guys that take the leap from non-All-Star to All-NBA player (Luka). I went with Luka because I think of all the leaps to make, this one is the most difficult to make. Trae could be mentioned here in the same vein, but he's not getting any first-team buzz….yet. It's rare for guys in year two to get votes here (Don McClean won in 1994, DeAaron Fox finished 3rd last season) and I get it: You probably should be expected to make a big leap from year one to year two. But being expected to do so, and actually doing it are very different and Luka did the latter. He's my Most Improved.

Thoughts: I think it shows here, but I value positional versatility in my defenders. If any of the guys above got caught on the other side of a switch, I'd trust them to hold their own against just about anyone in the league.

Thoughts: Kawhi gets bumped to second-team because despite Bam being here, I think Kawhi has more team defensive help on a given possession than Jimmy does in Miami. The rest feel pretty self-explanatory.

Thoughts: We do three All-Defense teams and FOUR All-NBA teams here at Mickstape because we believe there should be more recognition for all the good players in the NBA. Please do not tell anyone in my older family I am talking like this. Three Bucks feels a little extreme but the gap between how good they are defensively between the next team is substantial. Condolences to Jrue Holiday, Robert Covington, PJ Tucker, and Trae Young….almost had ya. Now we get to the nitty-gritty.

Thoughts: It's cheating a little to put AD at center when he's mostly played power forward this year. I don't care for a couple of reasons. First, these positions are dumb. Two, Basketball Reference lists him as having defended centers around 40% of the time: 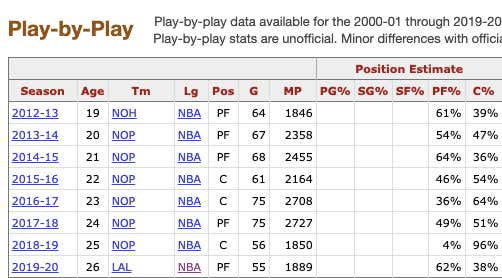 Good enough for me. Center it is. The other first-team spots have been locks since around Thanksgiving.

Thoughts: Kawhi has the biggest case here for a "snub" and if these were positionless, he might slide on first-team. I tried to find a way to get Russ to first-team but couldn't justify it in good faith. Butler gets the nod here at a loaded forward spot for being the primary offensive option for a team that basically plays at a Big Ten pace. They need every single point he creates and he's come through for the most part, despite shooting terribly from 3P.

Thoughts: I cheated again….kinda. I listed Khris Middleton as guard because the evidence strongly supports such: 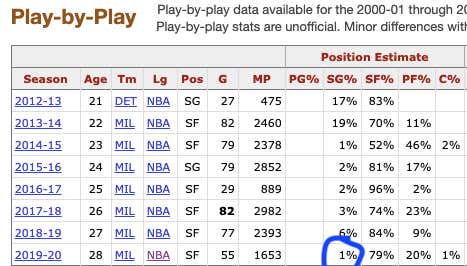 He's played as much center as he has shooting guard…. but he's played it damnit! Also:

Ha! He's clearly a shooting guard, it's settled. The two Sixers slide here next to two guys that had remarkably similar seasons. Blind test time, of these three 2019-20 NBA seasons, can you tell whomst is whom amongst these Per 100 posession numbers:

Can you tell which one is Pascal Siakum, which one is Jayson Tatum and which one is Solomon Hill? OK, Player A is Solomon Hill. Cats out of the bag. But look how close B and C in just about every stat, and their teams are 2nd and 3rd in their conference. To be honest, Butler/Siakum/Tatum/Middleton all had relatively similar seasons and each did it with another All-Star teammate. They could be in any order here, and I wouldn't complain. For the record, Siakum is B, Tatum is C.

Thoughts: The toughest cut here was at the guard position, where I had to pick two out of three from Trae, CP3 and Bradley Beal. Paul is the best defender here by a mile, turns it over the least by far and is probably just the best player. He's in. So Trae vs. Beal, you may say "Whiskers, what do the advanced numbers say?" Let us see, nerd:

So Trae has played more minutes, had a higher PER, higher TS%, shoots way more threes and free throws and assists on way more baskets even though their usage is virtually tied? Beal's advantage here is that he turns the ball over less, and the defensive numbers are a wash. These guys are 502 and 504 out of 504 qualified players in Defensive Real Plus-Minus (Beal 502, Michael Porter Jr 503, Young 504). These are maybe the two worst defenders in the game statistically speaking, so that cancels out. Trae gets the nod.

Adebayo, Ingram, and Sabonis are each 23 and younger and primed to make the top three teams next season. They'll have a lot of competition when you consider the guys that figure to be in the mix next year that weren't this year: Steph Curry, Klay Thompson, Kevin Durant, Kyrie Irving, Zion Williamson, etc.

Thoughts: Milwaukee is the best defense in the league by a considerable margin. Giannis is the best part of that defense. He has plenty of help with Brook Lopez, Eric Bledsoe, and crew, but this all works because of Giannis. If he ends up matched up on any one of the five players on your team, they should probably pass the ball. This is AD's award to win next year, for what it's worth!!!

Thoughts: It's Giannis. It was always Giannis. Him getting injured at the end of the season and the LeBron narrative train would have made things interesting but a las, he is our first repeat MVP since Steph Curry. And much like Steph, each won the MVP and then PROMPTLY put that season to shame. Consider that from last year to this year, Giannis played three fewer minutes but scored two more points, grabbed another rebound and got to the line more than he did last season. His team is top-seven in offense and defense and they lead the league in wins. He's the MVP.

You know how everybody got mad at Jokic for coming into the season pushing 400 pounds? His numbers the first two months of the season: 33 GP, 18 PPG, 10 RPG, 7 APG on 50/31/81 shooting. The Nuggets were 23-10, on pace for 57 wins. I say that to say this, I hope when basketball comes back that Nikola Jokic is 475 pounds and ready to claim this award next season.

While I've got you, join us for the live stream of the Mick Man and I commentating Game 1 of the 2001 NBA Finals tomorrow night.