If you thought we were done when it came to additional players/teams testing positive for this virus, you are sadly mistaken. In fact it's most likely the exact opposite, this shit is just getting started. Call me a pessimist, but the more players that are coming up positive the less and less confident I become that there will ever be basketball again this season. I know there's talk about pushing it towards the summer and all that, but that was always the best case scenario. Unless they can find a way to test and ensure that everyone from players to staff to workers etc are all negative I don't know how play ever resumes. Especially with all the tests that's going to require and the fact that there are basically negative infinity tests available.

When you look at the Nuggets recent schedule, there is one game that you could point to as a possible start of this spread 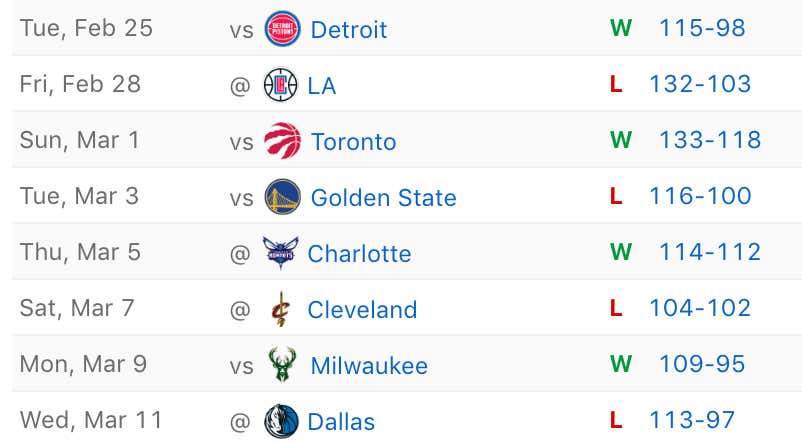 Christian Wood of the Pistons we know tested positive so maybe that's when it first made it's way to the Nuggets? They played TOR but that was before TOR played the Jazz and everyone was negative with the Raptors I believe. This just goes to show that there's really no pattern of how these guys are getting infected. The Nets didn't play any games against teams with infected players and they still had 4 guys positive. That tells me this thing had to be floating around the league for a LONG time which is pretty scary. I guess the spinzone here is since the league came out and said they will not be drug testing players during this hiatus and weed is legal in CO that quarantining for the Nuggets won't be so bad. The downside to that spinzone is you have to worry about Jokic going to town on quarantine snacks and gaining 100 pounds since team facilities are about to be closed starting tomorrow. Woof.

We're still waiting on the results from some of the other teams in the league that have tested their rosters, and I would be shocked if everyone else came back clean. I'm sitting here trying to stay positive, that one day the league will resume whether it's in mid June or later but it's getting tough. We're at the point where you need to be overly cautious and I just don't know how the league eventually guarantees that everyone is clean within that timeframe.

The whole thing just stinks out loud. Since nobody knows when we'll see the Nuggets play again, numb that pain with some highlights. It's all we can do