What an absolutely awe-inspiring speech. I can see why he is undefeated at 13-1** all time as a head coach. The man just has a way with words. And now I'm ready to run through a brick wall and lay the wood on the big old coronaman. If this is what Ryan Day is like during a global pandemic, could you imagine what he's like before the Michigan game? But anyways, you're right Coach, we are going to get through this thing together. Keep fighting!!!!

Now that LeBron and Urban are both gone, paired with the fact that Baker Mayfiled threw a 2nd in the league worst 21 interceptions last year, Ryan Day is the clear and definitive voice of this great state. And in this time of peril, he definitely stepped up to the plate and said all the right things in his second big public service announcement. (His first was when he promised the crowd that the Buckeyes would not forget about the Clemson game*)

I'll tell you what: he certainly knows how to play to a crowd. I think after he rattles off six or seven straight National Championships he might have a place in politics, especially if he keeps rocking that glorious beard he showed off today. 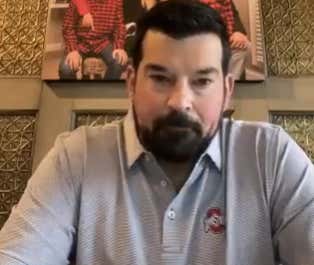 Oh baby does that beard look good. And you know what else looks good? The Buckeyes 2021 recruiting class. I know Ryan Day just got on camera to fire up the troops to beat the corona, but while it appears most head coaches have been hiding under a rock lately, he's been spending his time signing the very best players in the country. In the last couple days alone the Buckeyes have locked up:

If their 14 player recruiting class were completely done, the average composite rating per prospect in the 2021 class would rank as the best in Ohio State history. Oh yeah, and it's also on pace to be the #1 class in the country. You guys better hope the college football season gets postponed to like 2025 or everyone is screwed.