Last night I started reading, including the above report, and started getting furious because I keep seeing people on social media who refuse to stay home. Who are having cutesie little "wine nights with the ladies!!!" because everyone gets to work from home so they are acting like they are middle schoolers on summer vacation. I just...I'm losing my mind about it. Why the fuck can't people isolate? What is so hard about staying home and why do people refuse to do it? We have all the data, we see what happened in Italy, and still people act like this is some sort of joke. It's infuriating.

And then thanks to morons on Twitter, I found out why.

So this moron Peter won't be satisfied until millions of people die. Only once death rates are high will people like Peter begin to take COVID seriously. And that's the problem. People won't take it seriously until they see numbers. They need deaths on the books. They need videos of overcrowded hospitals and mass chaos. They need to see it to believe it. The fact we are taking extreme measures to PREVENT EXACTLY THAT FROM HAPPENING is too hard of a concept for some people to grasp.

The numbers are out there. We are taking these measures, shutting down leagues and cities and restaurants, in order to try and keep that death total as low as possible, because scientists know the alternative is morbid. 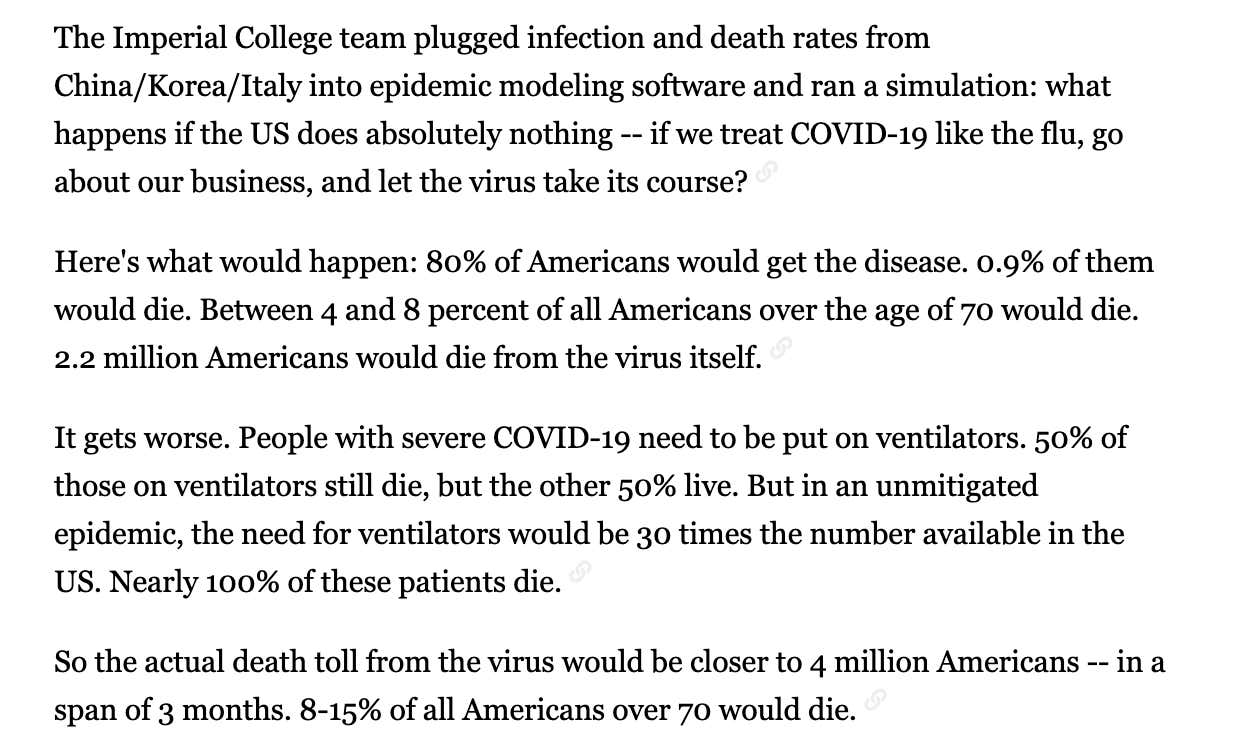 That's what would happen if we listened to people who said "it's no worse than the common flu". I…I am stunned people who have zero medical training can jump to conclusions based on absolutely nothing. If the "it's no worse than the common flu" people had their way we'd be looking at 4 million American deaths. Would that be satisfying to these people? Is that what they want?

It's such a fascinating paradox where the only way some people will take this seriously is if mortality rates are higher than that of the flu or H1N1. I don't know why people can't comprehend that we are trying our hardest to stop that from becoming a reality. 4 million people could die in only 3 months if we didn't take action.

The craziest thing is people who have some sort of death number until they will admit it's serious. I'm not trying to get political but have you ever, and I do mean EVER, seen President Trump do a 180 the way he has on this? Extremely smart people sat him down and showed him the facts- if the United States doesn't act on this, 80% of people will get it, up to 15% of seniors will die, and this blood will be on your hands.

Real the Imperial College report thread. Read what has happened in Italy. And stop going out. The more YOU go out, the more lives that are in danger, it's as simple as that. And yes, if you went to spring break or keep going out, you should feel bad. You are to blame. You are acting selfishly and irresponsible.

There are people who are still required to go to work, and this obviously isn't about you. I get that. You're in a shitty situation but if you have to be at work you're going to be there. It's everyone else who needs to stay home, stop going out with friends, stop having friends over, all of it.

This is what happened in Italy: 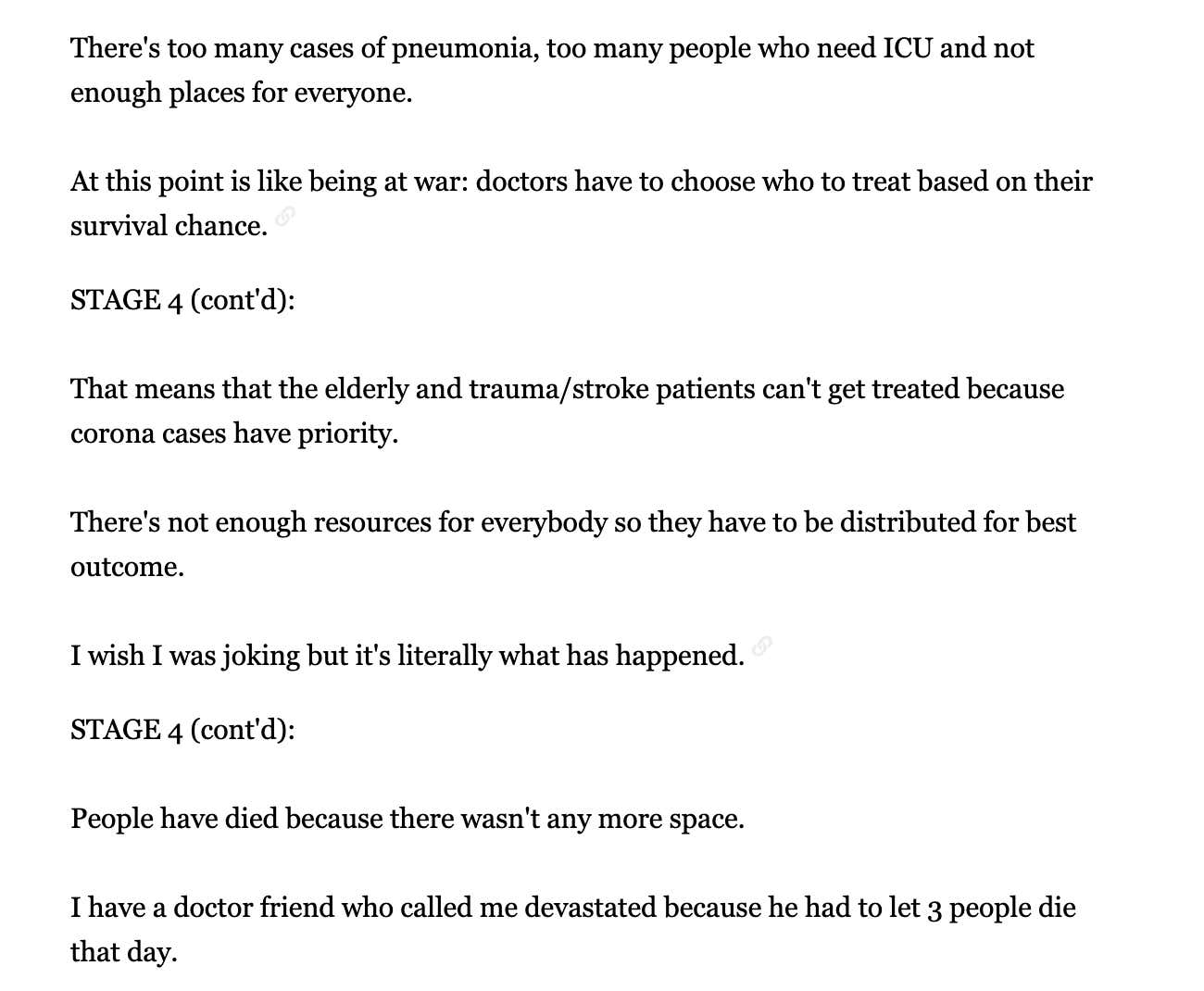 Hopefully people start taking this seriously. Stop being so brain dead for 3 seconds and think about the long-term consequences. Look at the numbers. Hopefully we can keep the death rate low and we don't get to the point where all the non-believers start to believe because so many people are getting sick. I'd rather the morons stay ignorant than the amount of deaths get high enough for them to admit they were wrong.

So do the right thing. 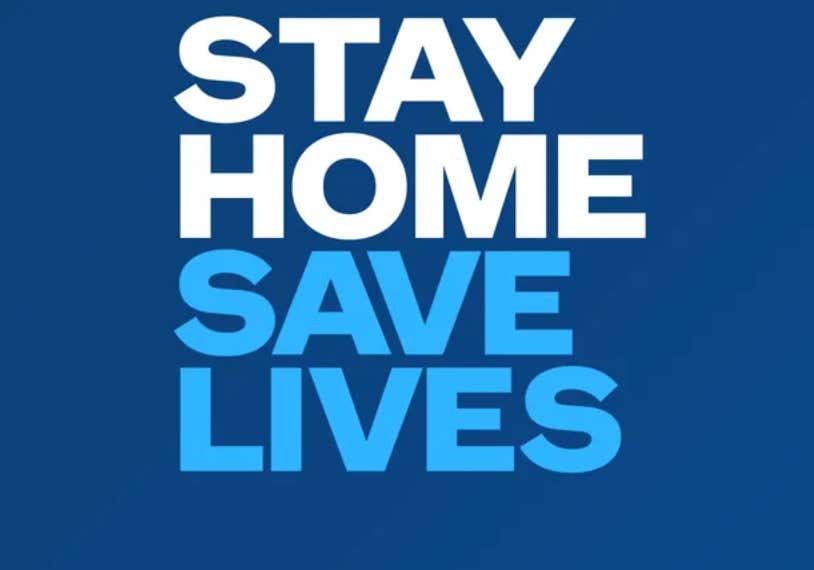