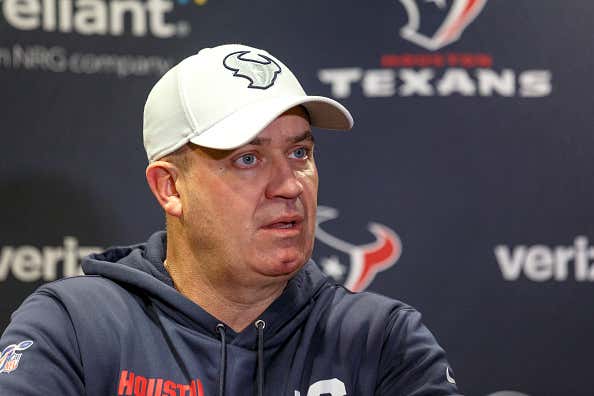 If you were wondering who was going to be the first confirmed case of Cabin Fever insanity due to all the social distancing and self-quarantining, look no further than Bill O'Brien. That's GM Bill O'Brien, not HC Bill O'Brien. Because so far he has stood alone - more than the six feet recommended by the CDC - in the early hours of the NFL league year.

It started out interestingly enough, with BOB making a deal with Arizona for David Johnson, a banged up, declining running back who lost his starting job last year and is getting paid 10 million bucks to sit behind Kenyon Drake, who ran for 1.5 YPA more than Johnson behind the same line.

"But hey," you might have been thinking. "Maybe he's getting a bargain here and Arizona will pick up part of that salary, Red Sox/David Price-style."

Then, Schefty dropped the big one.

So O'Brien gets the running back who ran for 26 yards a game last year he so desperately needs, and all he needed to do was give up the best receiver in the game, along with a swap of picks. And every Texans fan in the world right now finds themselves in the middle of a nightmare there is no waking up from.

And a live look in at DeShaun Watson right now:

I don't what to say about O'Brien. He used to seem like the most pragmatic, level-headed guy in the world. He could have a screaming match with Tom Brady on national TV and handle it like a total pro afterwards while people are trying to make more of it. He walked into the smoking wreckage that was post-scandal Penn State and bring the program back to respectability. He's been a solid if not wildly successful head coach in Houston. But they made him GM and he's gone completely banana sandwich.

Some men I guess are not equipped to handle the power. It breaks them.Drives them mad. O'Brien is Col. Kurtz in the jungles of 'Nam. He's Howard Hughes, sitting alone in his home theater surrounded by five-gallon bottles of his urine and watching the same Jane Russell boobs movie over and over. Nixon talking to the paintings in the Oval Office.

So far it seems like the winner in free agency is Kyler Murray who now has Larry Fitzgerald as his WR2. I just wish next time O'Brien wants to unload his most talented and accomplished player for next to nothing, he'd call his old boss first.