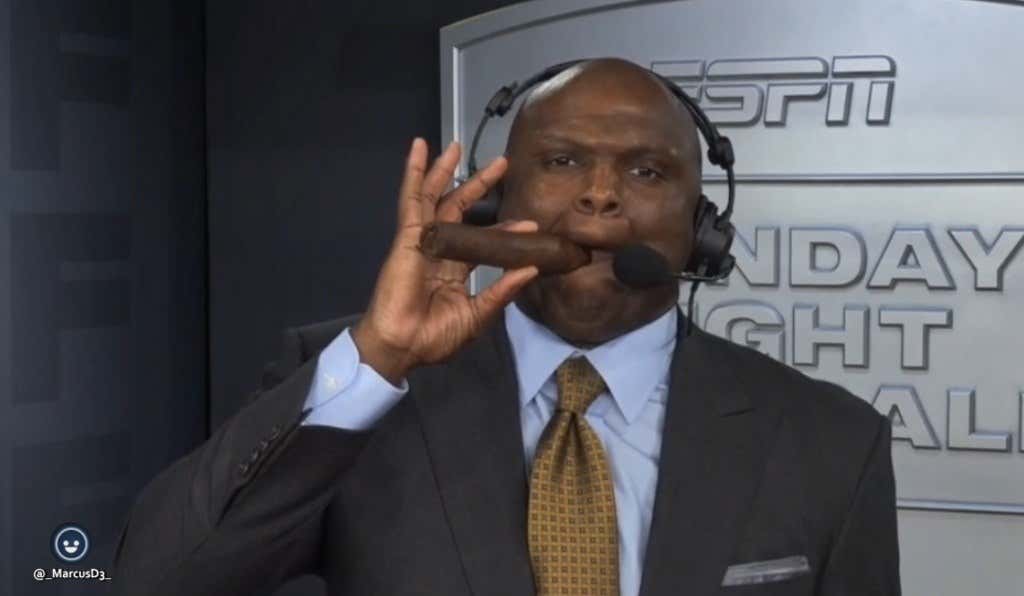 You dont tug on supermans cape. You dont spit into the wind. You dont pull the mask off the Lone Ranger, and you sure as HELL dont challenge a blogger fresh off a dismantling emasculaton of DK Metcalf in a 40-yard-dash to a bicycle race.

Thats right, Booger McFarland had the temerity, the audactity, the semi-mitigated gall to slap me in the face with a custom glove designed specifically for his broken pinky, and challenge me to a peloton competition. What you all certaintly know, is that every Monday Night this fall while Booger McFarland was yukking it up with Joe Tessitore in the ESPN Booth, I was busting my ass riding 10-15 mins of hell during my peloton Geneisis halftime show on IG live. But due to this crippling ignorance, Booger reached out via twitter on Friday to throw a rock at the hornets nest that is my brain, calling me out, and saying he wants me to come "get my ass kicked."

Forgive us against our trespassers for they know not what they do.

Be careful what you wish for Booger cuz you just woke a sleeping giant. Saturday afternoons is when I'm at my most powerful abilties. I'm not hungover anymore from friday night, but I still have the residual alcohol carbs in my system to give myself the health and energy necessary to make you wish you still had the motor generated luxury of the cruise control to take you off into that sunset.

In the spirit of fairness I took a look at Boogers stats on the bike because he rides like every day, and he is significatnly better at being athletic than I am. He typicaly finishes in the top 2-5% of any given class, where I am more of a 25-40% kind of guy. Easier to generate power when your a popeyes biscuit away from being Zion Williamson after 4 weeks getting force fed cafe du monde bengeits like a fois gras goose. So we comprismised and said that the line would be 305 kilojoules of power for a 45 minute workout. If I finish inside that number its a victory for me. If he beats me by more than that then he wins. I will also be going live on periscope from my twitter account to livestream the last 5 minutes of copmetition if anyone is so inclined to be placing wagers on that official line of BOOGER -305kj (-110)

You know, it's funny. People see these calves and they ask me: PFT- what are you on? I'm on my bike, 6 hours a day. What are you on?

See you in hell Booger.