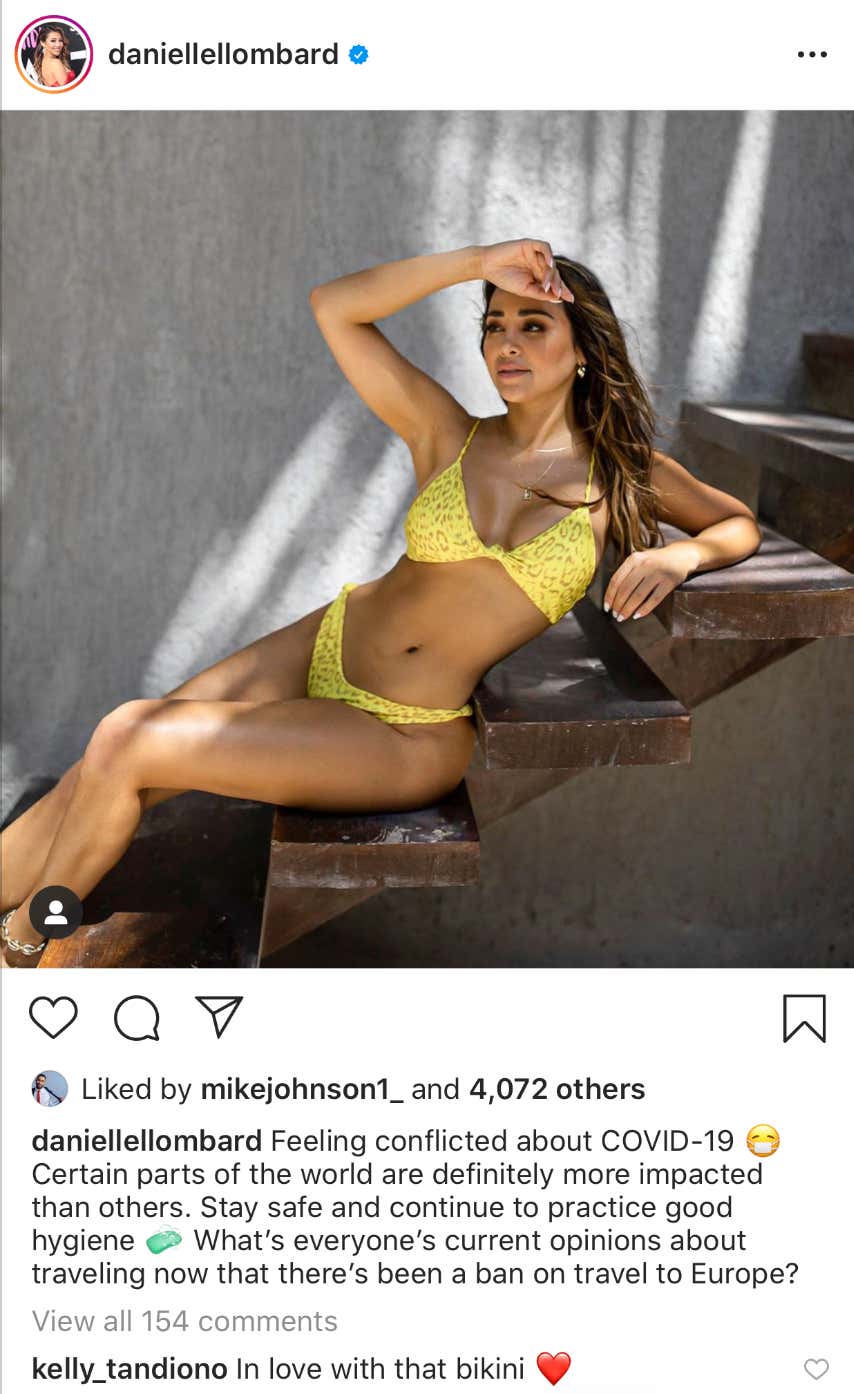 I was reading an article earlier about a mother who was heartbroken because her father, the most important figure in her life and her personal hero, had passed away from coronavirus complications before he had a chance to meet his granddaughter. Really made me regret some of the jokes I had made with friends last week, kind of laughing this whole thing off and thinking it was just a media-caused panic and would all blow over. I felt that guilt. I also felt — and I'm a little ashamed to admit it — lucky that it hadn't happened to me.  But most of all I just felt sadness for this woman. I thought it was the most painful and scariest thing someone could go through.

But then I read this story.

I'll give everyone a warning right now: if you're feeling anxious or scared, if you're on-edge emotionally, you might want to avoid this blog because it's definitely possible that it could be a huge trigger for you. I just think it's important to give everyone the same kind of perspective that I was able to get from it — that there are people out there genuinely hurting more than you could ever imagine:

Major Travel Influencers Say Their Lives And Jobs Have Taken A Pretty Significant Hit Due To The Coronavirus (BuzzFeed News, March 14 2020)

BuzzFeed News heard from a handful of influencers with followings that range from a few hundred thousand to millions, who say everything has been indefinitely put on hold. Some are unsure what being forced to limit their travel, photo shoots, and brand endorsement deals will do to their livelihood.

Quickly, before we dive into the tough stuff, credit where credit is due: Buzzfeed continues to go where most reporters are too afraid to go.  They saw what was happening, they knew the MSM was basically ignoring one of the hardest hit communities during the pandemic, and they went. And because of that courage, the whole world will see the plight of America's top influencers. Powerful. Thank you Buzzfeed.

Of course, it had crossed my mind that the Influencer industry would be affected, that's just common sense. But "a pretty significant hit"???

Nobody could prepare for that.

"Things have definitely changed in that I am not traveling at all at the moment and not actively planning unnecessary trips until the virus situation looks better."..."She made half of what she usually makes in the last month due to limiting her own travel and seeing a decline in paid partnership offers." —Melissa Hie, who documents food around the world on her blog.

It's been this way for a long time, no matter how hard I've tried to raise awareness through this platform: nobody thinks enough about the Instagram Influencers.

The brave 18-30 year old millennials who, every day, put their lives on the line by getting in an airplane, to travel to the most beautiful locations in the world, who spend hours every day in the hot sun with nothing but a gentle breeze from the bright blue salt water to break the perfectly temperate heat, grueling hours of turning, leaning, smiling, sometimes even bending...sometimes even all of those things at the same time. You never know, you can't prepare — it's just you, the camera, and the uncertainty of which way to look.

"It's impacting my income massively…I haven't seen any new inquiries in the past six weeks since the outbreak became more widespread." —Callum Snape, Vancouver-based travel photographer

And that's just the daytime. While other people get off work and get to relax with loved ones and friends, these Influencers head straight back to their free hotel room, often not even at a 5 star resort but some shit hole with only 4, with another 2 or 3 hours of filtering ahead of them, their tired, tanned fingers swiping Contrast bars to the right, Saturation bars to the left, pinching the Vignette in or pushing the Black Point out. This may seem like nothing to you, Average Instagram User —who probably couldn't tell us the difference between Sharpness and Definition with a gun to their head — but for an expert in the biz, these settings have to be EXACT, with pinpoint accuracy; not just to present a false unrealistic image that they like better than what's in the mirror to the world, but because selling those presets then becomes a major source of income.

And while all of this is happening — the physical toll I just described, even though it's almost indescribable with just words — the mental toll is even worse. The anxiety in your throat, your chest, your stomach, the constant panic that the world might see who you really are… like in real life, as a human being. That they might think that…and I hate even putting something like this out into the universe, so fearful it might happen to someone….they might think that there was a moment in your life when you weren't happy.

I wouldn't wish that on my worst enemies.

"Things are looking a bit bleak at the moment and there are definitely moments of uncertainty."

"Bleak" in an understatement, but what else would you expect from an Influencer? A group of people who have greater empathy and compassion and just better humanity in general than other occupations. They don't want to start a panic, but more importantly, they do not want anyone to feel bad for them. It embarrasses them. they're shy about it, they are completely and 100% selfless. They want all of the attention elsewhere, all of your thoughts and prayers directed to the regular families out there. All while they are living a literal nightmare — here, I didn't want to include this because I know he doesn't want anyone to worry, but just look at what @travelbabbo is going through right now. Imagine it was YOUR family.

"[I] was supposed to be in Berlin, Florence, Catania, and Istanbul last week. But one by one, travel plans were either canceled by airlines or by people I had planned to meet at the destinations…with literally every element imploding I canceled my flights and hotels…[I] was very disappointed….

I still have European plans in May and June with my family and have no plans to cancel…I was in Morocco and Spain with my family two weeks ago and I’m working on editing photos and then a blog post from that trip."

You couldn't do it could you? You couldn't imagine it was your family. Thinking about your kids getting back from Morocco and Spain and finding out that they were no longer going to Florence and Catania two weeks later. Watching their faces drop and eyes well up with tears realizing they won't be in Berlin in late-March, their favorite time of season in Germany.

Of course, any time a crisis like this strikes, the leaders always emerge to get them through it and speak out for the group. 2.1-million-follower @gypsey_lust, a Queen Bee in the travelgram game, issued a short but extremely powerful statement from a resort suite in Bali to let the world know they're fighting, but they're only human…sometimes even the strongest among us struggle to put on a brave face:

She's currently based in Bali and told BuzzFeed News she's witnessed "distress" from members of her travel community who are forced to indefinitely postpone their trips.

It's just not fair. It's not fucking fair. What these people have to go through, being constantly under-appreciated at every turn. The extremes they push themselves to, all day, every day.

And for what? All this pain and suffering and grinding, why do they do it?

To bring YOU the best deals in fitness teas and herbal diet supplements. Receiving nothing for their work but a commission fee for convincing you to buy something you don't need because of how fucking hot they look in it.

Putting their heart into extremely personal to the person who actually wrote it 6 paragraph captions about how Thessalonians 2:12 inspires them every day to overcome anxiety and push past the traumas of the past year, like the death of 13 family members and 4 pets and a recent health scare, and live life to the fullest, appreciating every moment with the help of this amazing product that they've conveniently shared below as an affiliate link, alongside a picture of them guzzling a Rockstar energy drink in a Rockstar bikini at the Rockstar pool party in Vegas.

Do you know how hard that is? To prey on people that effectively? Targeting people — mostly teenagers — already predisposed to problems with impulse control based on how far down the page they're scrolling? People spend 8 years in school for a degree in that. They'll have your little cousin broke with a room full of 590 lip-kits by the end of one lecture.

And yet those people are struggling worse than any of us.

"Some are unsure what being forced to limit their travel, photo shoots, and brand endorsement deals will do to their livelihood…definitely noticed a dip in people booking hotels and Airbnbs."

You know this is part of what makes this pandemic so scary? We're hardwired to expect  — or at least to want so badly we try to make ourselves believe — that the world is fair and just and always evens out in the end. That everyone gets what they deserve.

Then we see a story like this and we just can't process it. If people THIS smart and THIS talented are impacted so massively that they aren't even ACTIVELY traveling to Turks and Caicos to put one leg in front of the other on its tiptoes in the surf to sell Low T pills…

If even Gypsea Lust can't Facetune a smile onto her face right now….

The rest of us are surely doomed.

But I'll leave you with this. Despite everything you just read, the dire circumstances these young people are currently facing as COVID19 ravages the world…despite all the darkness….all they see is the light.

"On the flip side of this, we're going to see destinations and airlines invest huge amounts of money on the rebound, which I'm positioning myself to take advantage of to make up for the decline currently."

I hope this blog was helpful. I know it's long, but to me, it was worth it.

If two weeks from now you're at a grandparent's funeral, thinking that was it, there's nothing worse than this…remember that @TravelBabbo's family didn't get to go to Berlin, Florence, Catania, and Istanbul after they got back from Morocco and Spain.