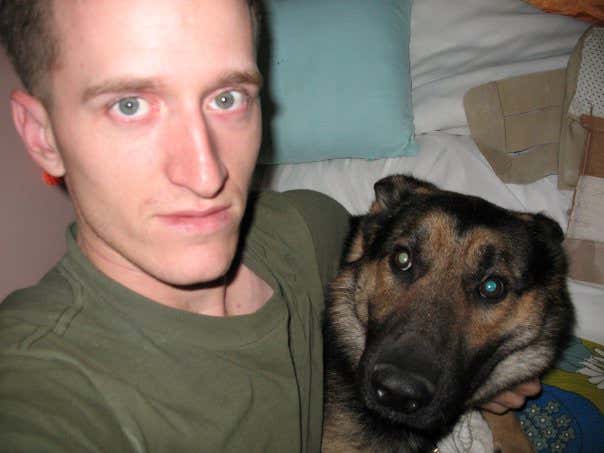 Back in the day, I was a dog handler. Even after all these years I believe that being a dog handler is by far the best job in the military. Sure, you can argue fighter pilot, astronaut, and things like that but, for normal people, with brains my size, a dog handler is as good as it gets.

When the rest of the Marine Corps starts their day, they do it with physical training, administration bullshit, or pulling weapons from an armory early as fuck. The dog handler’s day starts with feeding their dog, spraying shit from a kennel, and then playing a little fetch.

As I get further and further away from my active duty days, I appreciate the time I had in the kennels much, much more. Dog handlers themselves are a different breed. Working here at Barstool, I’m surrounded by funny people all the time. I work with some of the most talented people in media, but it’s still only a tiny step up from my regular interactions with dog handlers. I guess you have to be a little more loose than the normal military when 40 percent of your day is dealing with dog piss and shit. It's honestly probably why I still like poop jokes more than the average 37-year-old father of 2. Deal with it. I'm not changing. Well, I changed some because I had a vasectomy. No more live bullets on or off the range.

Anyway, seeing what dogs were capable of truly blew my mind. From teaching young dogs how to find bombs to trying to work aggression out of older attack dogs so that they could spend the rest of their lives on a couch instead of being put down, being a dog handler was immensely rewarding.

There was nothing like being on a patrol and finding an IED while a squad of recon marines was behind me cheering us on. Cheering swift, silently, and deadly but cheering nonetheless. When Csika would respond to an odor, my butthole would tighten; my voice would become more firm; my dog’s tail would wag at the speed of light. These little bubbas and mommas had no idea they were looking for devices that would rip through up-armored vehicles with ease. The working dogs looked for these devices because they simply wanted the praise of their handler or a ball from your pocket. It was that simple. It was that basic. Praise or toy. That was their life.

There’s no doubt that Csika saved my life many times. When the patrols were long, he worked hard. When the nights were longer, he was ever vigilant. When I sat underneath a stairwell covered in blood after getting shot, Csika stood the watch. No one was getting near me at that moment. He went from my partner to my protector in an instant. He could feel my fear and rose to the occasion.

Before heading on a helicopter to be removed from the scene where I was wounded, I managed to get Csika’s muzzle on his face. He walked with me, without his leash, and boarded the helicopter. I was told to lay down on the stretcher so that the air medics could tend to my wound. Csika laid by my side, his black and brown hair whistling through the gusts in the helicopter as we got higher and higher over an area littered with bodies and bullet casings.

After landing at the ambulatory surgical site on camp Fallujah, I again walked off the bird under my own power. Csika was in the heel position until I laid down on the operating table. When I woke up, Csika was gone. Another handler came to get him and take him back to the camp’s kennel. Full disclosure, I’m kinda crying while I write this. Csika didn’t sleep for the days I was in the hospital. He stirred in his kennel, moaned, didn’t eat, didn’t drink and he didn’t want anyone else to touch him.

In the time I felt the most alone in my life, so did Csika. I was in a hospital bed surrounded by the best emergency doctors and nurses in the world; he was in a concrete kennel alone, tired, and hungry.

Months later, I was out of Iraq and moving on from Japan, where I was permanently stationed. It was hard leaving Okinawa because I was leaving a bad marriage (dope. My wife now is super hot and brilliant to boot), 4 years of memories, and many friends behind. Csika had to stay in Japan too. After training him from the time he was 1 and a half to the time he was 3 and a half, when I got on a flight to Virginia, I never saw him again.

While I was at Quantico, Csika went back to Iraq again and then to Afghanistan twice without me. I was too big of a pussy to go back. He wasn't. The dog who I lovingly called "The Bunny Rabbit" because of the way he’d hop around when we were about to work died a few years ago. He had cancer and was getting rather old. I was gutted when I found out.

The memories of Csika I have are forever. Whether that be training in the jungle caves of Okinawa while working on tracking skills or kicking through moon dust in Iraq while looking for IEDs, Csika was always happy to be there. The further I get away from my timeline at war, the more I’m happy he was the one with me. I was his dog handler but I couldn't have handled it without him.

On today’s show of zero blog thirty, we talk dogs in the last segment. Give it a listen.