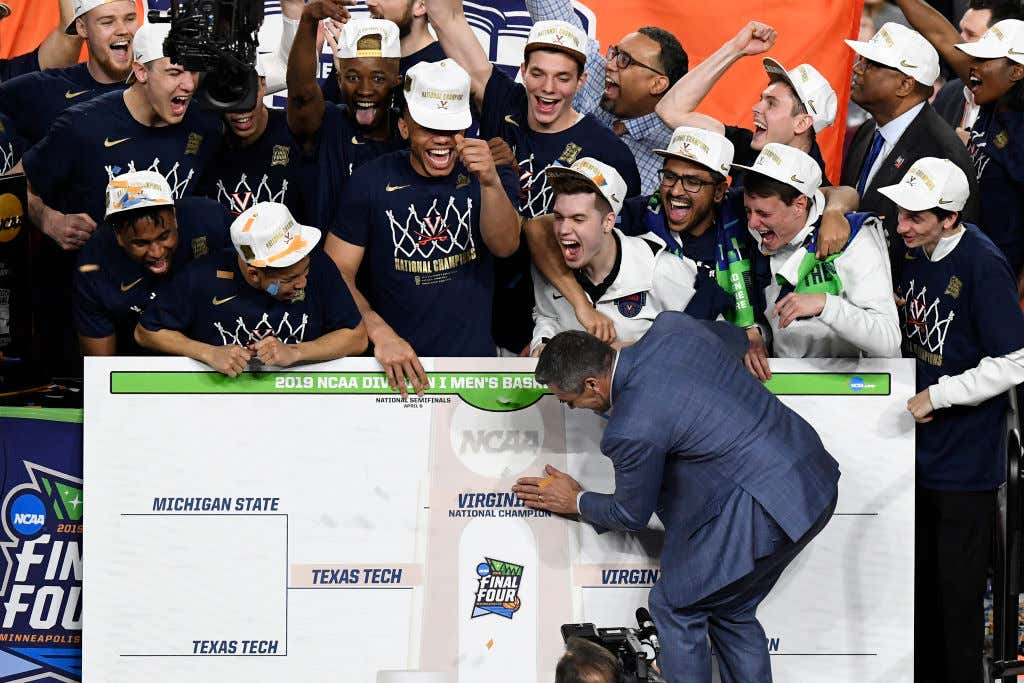 No conference tournaments. No Selection Sunday. No bracket. That's the unfortunate reality of college basketball right now, so instead of having Jon Rothstein come in for Monday's show to break down each of those topics, he appeared on today's Pardon My Take to discuss what the tournament landscape *would* have looked like if this virus didn't take over. The college basketball insider chatted with Mr. Cat and Mr. Commenter about the decision to cancel the tournament, his bachelor party, and more. But the guys attempted bracket talk, and here's how it went:

Mr. Commenter: We do have to crown an NCAA Champion, don't we? So, does that go to Kansas?

Mr. Commenter: I think you could make the argument that Wisconsin is the National Champion.

Jon Rothstein: I think we are going to see an asterisk there. For 2020, there will be an asterisk, season canceled.

Mr. Commenter: Is it still UVA? Because to be the man, you have to beat the man?

Mr. Cat: Let's just talk who you like. Suspend disbelief. Dayton. 1 seed. Coming out of the East. What do you think? Hank just sighed.

Jon Rothstein: Look, Dayton to me was going to be the 1 seed in the East. Dayton to me was having the type of season that Wichita State had in 13-14 before they got picked off by Kentucky in the Round of 32, but these right now, are all stories that are never going to be finished.

Mr. Cat and Mr. Commenter: No, no, no. That's not what we are doing right now.

Mr. Cat and Mr. Commenter tried, but unfortunately Rothstein wouldn't fully buy in. Something he did say of importance, though, was in response to Mr. Cat's question about his Wisconsin Badgers earlier in the interview:

Jon Rothstein: It depends. Are they seeded against Vermont in the first round? Because that would have been very scary.

Jon Rothstein: With Anthony Lamb and Ryan Davis... Ryan Davis was the guy at Vermont that my well-embedded moles in the America East were telling me was going to be the next star of that program. Really good combo forward, can pick and pop, can make shots from deep, so I was prepared to go deep on Ryan Davis.

Damn. Damn. Damn. The thought of getting a crack at Mr. Cat's Badgers on the biggest stage in the sport would have been so much fun. This was the year of the Catamounts, and I will still remember this college basketball season as one that just got more unpredictable day in and day out. Very unfortunate for everyone involved, but safety first is the right decision. By the time Selection Sunday 2021 rolls around, we will be more than ready.