Source - As the NFL mulled a response to the coronavirus pandemic, the Patriots were still out on the scouting trail Thursday morning.

A league source said New England had multiple staffers at Clemson’s Pro Day Thursday. Most NFL teams had a presence at the event, even as responses and travel restrictions around the league are shifting rapidly.

Also Thursday, after the Clemson Pro Day began, the Redskins and Buccaneers decided to pull their coaches and scouts from the road as a precaution.

“Due to health and travel concerns surrounding COVID-19 we have informed all of our scouts and coaches that they must return to their home bases and travel will be suspended until further notice,” Washington owner Dan Snyder said in a statement. “The health and safety of our staff and players is our number one priority and we feel that these are the necessary precautions given the current circumstances.”

And there it is, as clearly as its ever been expressed: The Patriots Difference, in microcosm. The WHO declared Covid-19 a worldwide pandemic. The President shuts down travel from Europe. Event are being canceled. People in hazmat suit are self-quarantining in their boarded-up homes, surrounded by 50 gallon drums of Purell and enough hoarded toilet paper to last them til the sun goes nova. Failed franchises like the Buccaneers and the goatfuck Dan Snyder runs are pulling scouts off the road, presumably willing to take prospects agents' word for it that they're really really good instead of seeing for themselves.

Meanwhile Bill Belichick is sending his minions forth to look under every rock, boulder, pebble and fake hide-a-key stone next to people's front steps to find the talent that's going to win him his seventh ring. Because it won't win itself. And fortune favors the brave.

Are there risks involved? Of course there are. But in every worthwhile quest you're putting your life on the line. King Richard I was killed by a crossbow fighting the Third Crusade. Hundreds have died on the slopes of Everest. Early Apollo astronauts died in a fire on the launch pad. Explorer David Livingston of "Dr. Livingstone, I presume?" fame knew he risked disease while searching for the source of the Nile, and he found it. Granted, it was him that brought Western germs to the locals and killed thousands of them. But the point is, doing great things requires one to take great chances. Fortune favors the bold, and all that.

The semi-ironic thing in the Patriots scouts taking this particular risk is that since Belichick took over in 2000, 77 Clemson players have been drafted, with exactly zero of them taken by New England. So it's not like Clemson, good as their draft class is, is one of their feeder schools like Georgia or Rutgers. This isn't Belichick doing a solid for a guy off his coaching tree. In fact, about the only connection you can find between Clemson and the Pats is this picture of Trevor Lawrence. 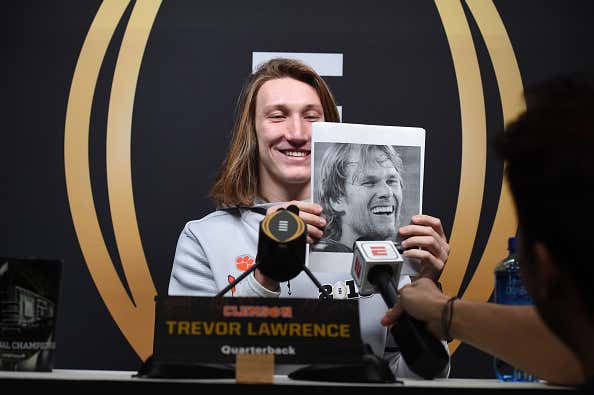 But just on the odd chance that S/LB hybrid Isaiah Simmons somehow drops or that they go WR in the first round again with Tee Higgins:

... they're going to be ready. Again I remind you, this is the most time the Pats have had in an offseason in 10 years. And between this and Belichick working out marginal small school linebackers:

… the NFL had better be on notice they are playing for keeps. And a little thing like a worldwide pandemic is not going to stand in their way.

P.S. Yes, I know Mike Tomlin was there in person along with a bunch of other Steelers people. Let some Pittsburgh blogger write about that. I'm skating my lane here.