That's right. America, specifically the United States Air Force wanted to hit the moon with a nuke. Just nuke the shit out of it. That little white ball has been hanging up there taunting us long enough. It's practically begging to be nuked and a little something called "Project A119" was going to make it happen.

This was back in the late 1950s. The Cold War is officially raging. America hates the Soviet Union. The Soviet Union really fucking hates us. We started battling it out everywhere. Proxy wars, spheres of influence, the Olympics, and even outer space. At this stage of the space race the USSR was kicking our ass. We had rocket failures left and right. Meanwhile the Russians were successfully launching satellites into orbit and people could see Sputnik with their naked eye at night. They were taunting us with their science.

So what does that have to do with nuking the moon? Great question. Well because we were losing the space race against the Soviets, America was feeling pretty down about themselves at the time. We needed a confidence booster. So the geniuses in the government were wringing their hands and racking their brains. They were like "what do Americans love?"...answer: fireworks. They knew that wasn't enough though. What about fireworks....in space? Now you're talking, but it needs to be bigger than that. More powerful than regular fireworks. How about...nuclear bombs...in space. Boom, an idea and top secret project was born. Project A119. Nuke the shit out of the moon at night for the whole world to see and let them know that 'merica did that shit, not Russia.

That was the whole goal. Nuking the moon would've accomplished nothing except for the undeniable fact that blowing stuff up is sweet. Nukes in space is the highest achievement of that and they had the perfect spot picked out and everything. Right were the light and darkness meet on the moon 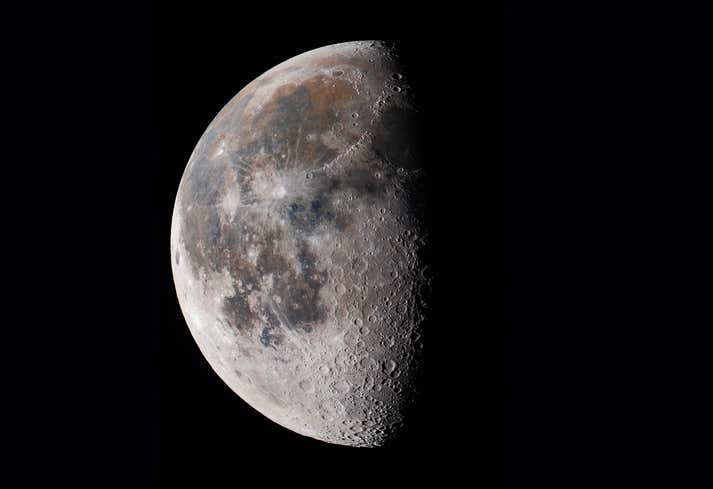 Big explosion right on that line for everyone to see how great we are. It would've been incredible.

Ultimately, people who didn't have the instincts of a true bad ass killed the plan. 1) They thought that the public reaction might be negative. I think they misread the room because, like I said, even just saying nukes in space out loud feels amazing. Close your eyes and  say it, nukes....in space. Wow. What a rush. 2) They were worried that they'd miss. The moon seems pretty big. I think they could've hit it, but the scientists were worried that if the rocket didn't get out of the Earth's atmosphere then an armed nuclear warhead could just fall anywhere back on Earth and yeah, I suppose that would be bad. 3) They didn't want to contaminate the surface of the Moon with nuclear fall out. Again, also bad. Not the end of the world, because...it's just the moon. They don't have a whole lot going on up there anyways, but they didn't necessarily know that at the time. Leading scientists still though that moon was made of cheese in 1959 when this project was ultimately killed and we decided to try to put actual humans up there instead of nukes.

And yeah, this was a real program by our real government. Here is a copy of the cover that is widely available on the internet 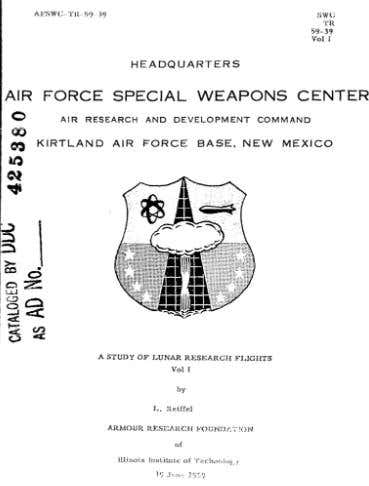 The Cold War was a crazy time. Both countries would do anything to win. The other reason the United States was so keen on nuking the moon...they heard Russia was trying to do the same thing and no way in HELL were they going to nuke the moon before us. No way, no how. Fuck those guys. 'Merica!

I think I have written this somewhere before, but I do think we should try to nuke Mars. It's just sitting there all shitty and red and pathetic without any life or an atmosphere. Mars needs a kick in the ass and I have seen enough things in pop culture science fiction to know that nuclear fall-out helps create life. Take a bunch of rockets, load them up with organic material, and crash them into Mars. Then right behind them send a giant hydrogen bomb. Mix those two things together and in 50 years there will be Martian rivers, trees, and probably little bugs. And if it doesn't work then, whatever, there was probably never going to be a way to live on Mars anyways no matter what Elon Musk says. Anyways, that's it for today. Have a good day.