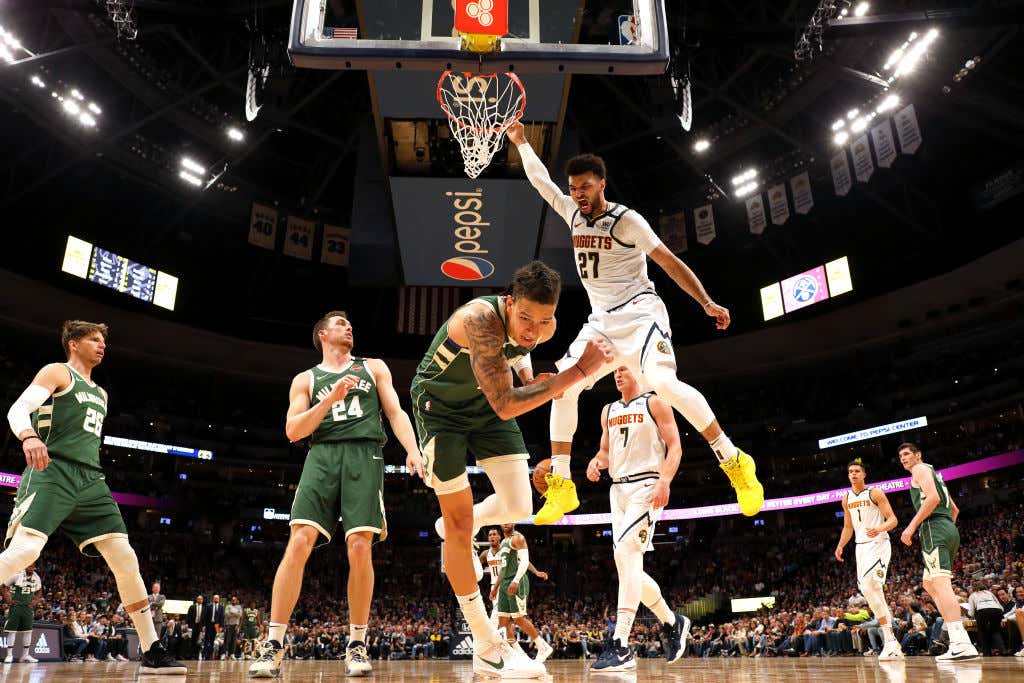 Good morning everybody happy Tuesday and welcome back to another edition of Last Night In The NBA where we bring you up to speed on everything that went down from the night before in the Association. It was a relatively light not on the NBA schedule with only 3 games, but boy did all three deliver. One game gave us one of the craziest games of the year and the other two were important in terms of playoff seeding, this is pretty much how it's going to be the rest of the way. All of these games matter with the standings in each conference being so close which is what makes the stretch run of the season so much fun. If for whatever reason you decided to watch something else and missed the action, here's what happened.

Not a bad way to kick the night off, despite this being a game between two lottery teams. This was just the fourth double OT game of the season and just like all the others this game was filled with complete madness. Not a whole lot of defense being played and honestly who cares. Neither of these teams are going anywhere so I say score a billion points to keep me entertained. The Hornets never had a quarter under 28 points until we got to OT, the Hawks shot 55/48%, we had 35 combined threes and drama coming from everywhere.

For the Hawks a lot of the damage was done by their two stars in Trae Young and John Collins, two guys that combined for nearly 60 points

Collins went a ridiculous 12-13 from the floor, Trae Young made a little NBA history per usual

and even though he missed the FT at the end of regulation that got us to OT, he responded by hitting a couple logo threes and ultimately putting the Hornets away. The thing about ATL is we know Young and Collins are both really good. They are franchise cornerstone players for a reason. What we didn't know? Maybe Cam Reddish is actually going to be pretty good

Did you know post All Star Break Reddish is averaging 17/3/1.4 on 51/40% shooting??? That's a big jump from his 9/3/1 on 35/31% that he was throwing up pre break. That pick looked like a disaster for much of the season, but over the last month or so he's found something and actually looks like someone who was worth a lottery pick.

For CHA, their backcourt was a serious problem with Terry Rozier and Devonte Graham combining for 67 of the 138

While it may not be the most efficient at times, that backcourt can score with the best of em. Terry was ultimately the hero with his late barrage of threes to end regulation and then his huge shot in double OT, but Graham was right there. Unfortunately their offense sort of stalled late in the 2OT and Graham held the ball waaaaayyy too long before forcing tough shots, but that's what the Hornets do.

Caleb Martin chipped in a solid 23 off the bench

and it's not often you see a team come up with 55 bench points and still lose, but that's just how crazy this game was. As always not playing defense came back to bite someone, but this is honestly more of the same for a team that's 12-21 on the road this season.

This was a game the Bucks were clearly punting. We already knew they were going to be without Giannis, but they also sat Middleton, Lopez, DiVincenzo, and Marvin Williams. That was a white flag before they even tipped off and while it might not matter in terms of their #1 seed in the East, it DOES matter when you look at the overall #1 seed. The Lakers woke up just 1 game back in the loss column now that the Bucks have lost 4 of their last 5. Not exactly and ideal situation, especially if this team has Finals aspirations. Making sure they have homecourt throughout is a big part of their potential run to a ring.

Other than that, it's hard to really put any stock in what we saw because this is certainly not the Bucks team we will see moving forward. They shot just 37/30% with 17 TOs, they were down 15 after the first quarter and it was pretty much a wrap after that.

Chances are after a nice little break everyone will be back Thursday now that things are getting tight with the Lakers, because honestly we haven't seen the Bucks go on a stretch like this all year. Can't imagine it continues.

For DEN, you think they gave a shit that the Bucks sat everyone? No chance. Mostly because after a couple brutal losses of their own, they desperately needed this win. The Jazz went on a little run and got within a game of the 3 seed, so they needed this game to right the ship and that's exactly what happened.

Good for Gary Harris to actually look pretty good recently after a long and brutal season of underachievement. He's a big part of their core and if he can look like this the rest of the way it brings a different dynamic to their offense. If he can be a reliable three point shooter combined with his good defense, this team won't end up missing Malik Beasley.

Obviously the big play of Murray's poster being called an offense foul was insulting, you just can't make that call. Not only was it nowhere close to being an offensive foul, but out of principle you cannot bail the defender out like that. With Utah losing the Nuggets lead is now 2, and they trail LAC by just 0.5 games for the 2 seed. The Nuggets are very much alive at the top of the conference, and wins like this can go a long way to help secure as high a seed as possible.

These fucking Raptors man, they're just so goddamn good. At home, on the road, against good teams, it doesn't matter. They just win. Now 4 wins in a row and some legit separation from BOS for the 2 seed, this team continues to impress in big time high pressure situations. They always come through, it's insane.

Serge Ibaka with the game of his life out of nowhere with 27/13, Kyle Lowry with some DAGGER late game threes, and then you add Siakam who may have started slow but finished strong with 27/11/8. Those three were really all they needed to pull out a game in a tough place to play.

Now, Norman Powell getting hurt could be an issue given how well he's been playing, the dude was just the Player Of The Week, and with FVV already banged up the Raptors certainly are getting hit with injuries at a tough time. But unlike some of their competitors in the East they are finding ways to win which just goes to show you how good they are. I've been preaching it all season, this Raptors team is every bit as legit as the team that won the title, even without Kawhi. They are going to be a problem in the postseason no matter what their seed is.

For UTA, fuck you. Real mad at the Jazz at the moment. That's what happens when they stab me in the heart twice in 4 days. So what if that's petty, this is my blog and I do not appreciate what they're doing. Now they shoot 39/37%? Now Mitchell and Conley combine to go 8-28? So goddamn annoying

This loss now has them 2 behind DEN and just 1 up on OKC and 1.5 up on HOU. That 3-7 seed race in the West is going to be bananas to finish the season and any sort of slide could be very costly come the postseason. For a team that was 21-9 at home to lose like they did basically the whole way to an injured TOR team isn't the best look, and you fear this isn't the start of another losing streak.

That's pretty much what the Jazz do. They lose a bunch in a row, then they win like 5 or 6 straight, then they lose 4 in a row. Their schedule coming up is OKC/NO/MEM/LAL/LAL so it's not exactly easy. You could very well see them lose 4 of those 5 or something like that and that could be a death blow to their homecourt chances.

And that's it! You're now all caught up with everything that went down last night in the NBA. Hopefully that helped kill some time for you this morning, have a great Tuesday!