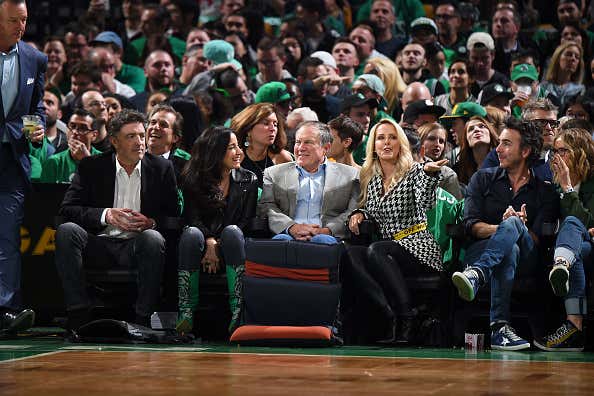 There are moments in a man's life that define him. That's far from the most original thought ever put into words, but usually when they're said, it's referring to the moment of great adversity. And whether that man will lose hope and give up, or fight. To steal a phrase, whether he'll suffer the slings and arrows of outrageous fortune, or to take arms against a sea of troubles and by opposing, end them.

Sometimes though, we define ourselves even more clearly in the good times. The moments of triumph. For ourselves, of course. But also for others. How you react to the good fortunes of your friends can say more about what kind of a man you are than even your own challenges.

Which brings me to this story, told by Wyc Grousbeck on WEEI this weekend. It takes place at the TD Garden, during Game 6 of the 2008 NBA Finals against the Lakers. Leading the series 4-2, Grousbeck's Celtics outscored LA by 19 in the 2nd quarter and took a 23-point lead into the half. And he and his guest Bill Belichick took it into one of the clubs for halftime.

“I go Bill, ‘What do you think?’ and I was thinking he would calm me down because we could have won the championship that night, or not if we blew it," Grousbeck said. "If anyone is going to give you the party line, ‘One play at a time, do your job’ it’s going to be Bill. I looked to him for that and I said, ‘Bill, what do you think?’ He goes, ‘Are you kidding me? You’re the bleeping world champions. You can celebrate right now.’ I was like, 'I just got jinxed by Bill Belichick.'

"He bought a round of tequila shots for the entire bar, the entire club and we beat them by 30. I love Bill.”

Actually the Celts won by 39, just to correct the historical record. But that's neither here nor there. The more relevant point is that this is how a person should go through life. Confident. Fearless. Reveling in the success of the people who support them. Understanding that their triumphs are yours. And a cause to celebrate.

I have to admit, I'm with Grousbeck on this. I would never have expected so much confidence coming from a man who preaches "play 60 minutes" (or 48 minutes as the case may be) as gospel. Who keeps his starters in games where they're up three touchdowns halfway through the 4th quarter because he's seen leads like that get blown. Who calls timeouts in the final minutes of games that are no longer in doubt. And keeps the same, consistent mindset whether he's leading by 20 in September or losing 28-3 in a Super Bowl. Go figure.

That's what instantly makes this one of my all time favorite Belichick stories. Him totally fanboying the Celtics. Brimming with confidence. Running down any notion that the Lakers could come back, even from the man who had the most riding on the game. Celebrating early. And going all Expecto Patron Shot for the whole bar to prove how much faith he had. In that moment he might as well have been Nick from Revere or Sully from Weymouth, in  a Green Team shirt, hugging strangers and drunkenly making plans to meet them outside The Harp at the Duckboat parade.

I mean, I wouldn't have had the balls to declare the game over at halftime, but that's just me. I wasn't celebrating in Game 6 of the '86 World Series with the Red Sox up two runs with two outs and nobody on in the 10th. Or, for that matter, when the Celtics were up by 13 in Game 7 two years later. I've seen too much to celebrate before it's over.

Bill Belichick is not that way. And the fact he was willing to declare the Celtics championship won with a half still to play mere months after his team lost the chance at a 19-0 season is a testament to what kind of a man he is. And how much of a basketball expert he is, since he turned out to be so correct. From now on, I'm going to try to be more like him. And to drink more tequila shots while I'm at it.