I always thought this last Saturday is the weirdest day on the college hoops calendar. You have conference tournament games, conference tournament title games and regular season champs being decided. You also have a hundred games that don't really matter. It's just a weird day all around but my God did it deliver it yesterday. We had a little bit of everything. It was by far the best day of the season so far. Not even close. I'll be doing these during the week with conference tournaments starting to keep everyone up to date. Maybe you were out drinking. Maybe you were fighting the coronavirus. Either way, here's everything you need to know about a Saturday in college hoops: 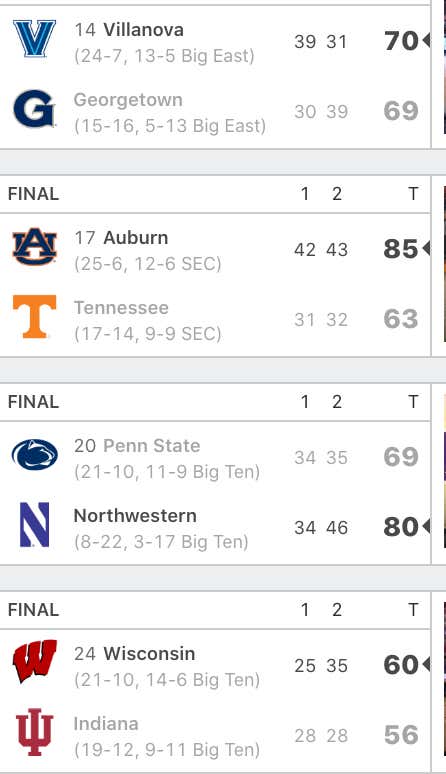 Utah State stole a bid on a ridiculous game-winner

By far the biggest story in college hoops yesterday was Utah State winning the MWC Tournament. They were firmly on the bubble before the game, but got the auto bid shrinking the bubble by 1. At the same time, it might move SDSU to the 2 seed line, which isn't necessarily a negative considering they'd stay out west. Sam Merrill was so fucking good. He dropped 27 points, including this game-winner.

Belmont's going to the NCAA Tournament on a beautiful game-winner

Kentucky's starting PG stepped away from the team for a few days, they trailed by 18 and came back

Kentucky's starting point guard Ashton Hagans didn't travel with the team to Florida. He stepped away from the team for a few days to get right mentally. It didn't matter. Kentucky led for 11 seconds and you're looking at the bucket that put them ahead. Florida was kicking Kentucky's ass, I'm man enough to admit that. Immanuel Quickley fouled out, playing just 15 minutes. It didn't look great. But then Nick Richards took over the game. Florida didn't have anyone that could stop him in the second half. Johnny Juzang was making threes. Keion Brooks took a jump. This keeps Kentucky in the hunt for a 2 seed.

Obi Toppin is still so goddamn fun and good

So Wisconsin came back from 9 down to beat Indiana. Honestly, it was a collapse by Indiana mostly because its offense is completely trash. Wisconsin ended the season as hot as anyone in the country, which is why they won at least a share of the Big 10 title and a 1 seed in the Big 10 Tournament. Pretty remarkable considering where they were just over a month ago. But the real story here is Archie Miller losing his mind on Joe Lunardi afterward

I don't know, man. Maybe just win the game at home when you're controlling everything. That would be smarter.

Fucking Tony Bennett. The dude just knows how to coach. Virginia looked like they were going to miss the tournament completely. Instead, he's somehow turned Jay Huff into the best player in the country while Kihei Clark just drains big shots. This time they beat Louisville again, moving them to 23-7 and 15-5 in the ACC. Oh it also did this.

At the same time, Florida State went and won the ACC outright. They don't draw as much attention as Duke or even Louisville, but they finished clear by a game. They also did it without really having a big time NBA prospect, which is fairly crazy in the ACC. It's just a standard FSU team. They have a bunch of length. A bunch of depth. They can press and trap you like hell to force turnovers but this year they have shooting. A ton of credit to Leonard Hamilton for getting an outright ACC title.

Xavier and Cincinnati are both bubble teams, both playing at home in Cincinnati. UC was down the entire game to Temple before stealing that win. Xavier was back and forth with Butler late before taking the lead and then somehow not forcing the ball out of Kamar Baldwin's hand who finished with 36! This sort of showed how crazy college hoops was yesterday. We had a bunch of game winners like this.

After Nova beat Seton Hall earlier this week, it meant that there was a chance for a tie. Nova got there by beating Georgetown on a goaltend and-1 in the noon session.

Meanwhile Creighton lit up Seton Hall. It really is a perfect matchup for Creighton mostly because Ty-Shon Alexander is the exact person you want to guard Myles Powell. He has the length and size to bother him while being strong enough to get through screens, etc. On the flip side, Creighton just lights you out from outside and they are unique in the sense of running a true smallball line up. So they are the 1 seed in the Big East, but by far the MVP was the arena having the banner ready to go immediately after the game.

The SoCon had 3 great teams - ETSU, Furman and UNC-Greensboro, seeded in that order. Furman and UNC-Greensboro were eliminated in the quarterfinals. The MVC is giving up a 4 vs 7 final. The 2 seed in the Summit League lost in the quarterfinals. There have just been a bunch of upsets early on and it's really setting the tone for the next two weeks.

This was in the middle of the afternoon. UCLA, arguably the hottest team in the country, had a chance to clinch at least a share of the Pac-12 title if they beat USC. Then Jonah Matthews happened. In the same game that he became USC's all-time leading 3pt shooter he drained this game-winner to beat UCLA. Oregon hosted Stanford late night, with a chance for the outright Pac-12 title. Just go ahead and put Payton Pritchard as a unanimous All-American too. The senior finished with 29 points, 6 rebounds and 5 assists.

Granted UNC sucks this year, but Duke/UNC always makes headlines, just look at game 1 from this season. That said, they were the main slot yesterday at 6pm and no one really talked about it. People were invested in the San Diego State/Utah State game instead. Duke won by double digits in a game that was closer than that for 37 minutes. What it really did though was push UNC to the last seed in the ACC Tournament and handed Roy Williams his first losing season ever as a coach.

Cheerleader/dance team photo of the weekend: