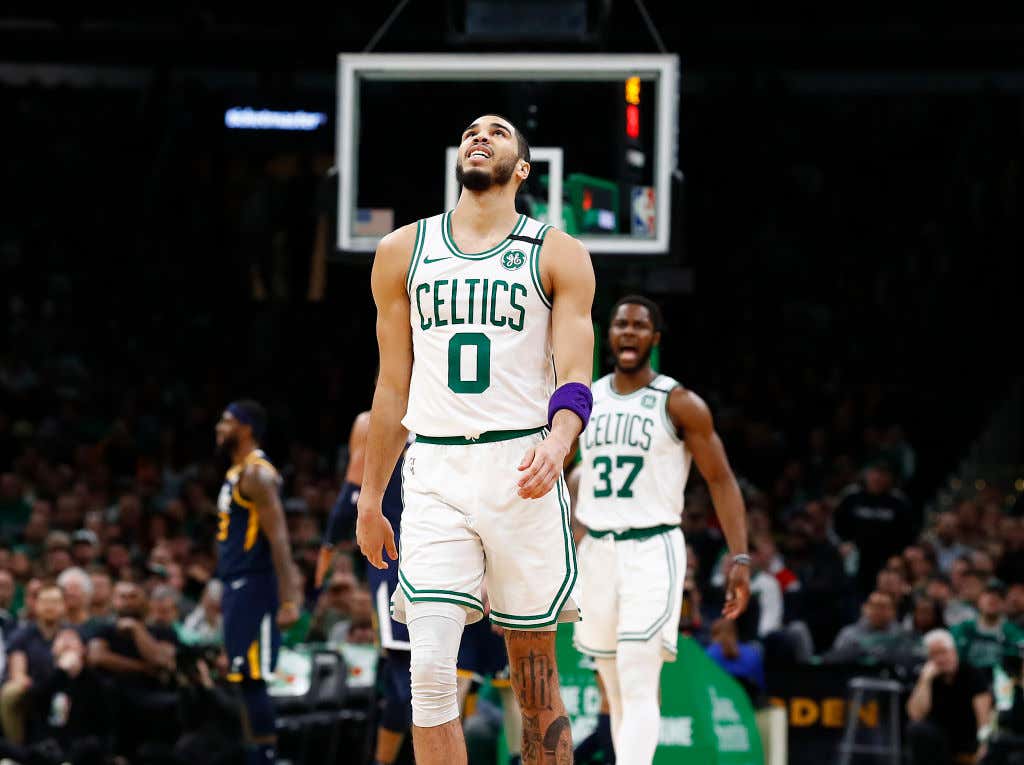 Well that certainly wasn't ideal. I get trying to beat playoff teams shorthanded is a tough task, but we can't really have it both ways. We can't love the Hospital Celtics and talk about how awesome they are that more often than not they find a way to win, and then when those very same Hospital Celtics play like shit and lose another game at home they were up by double digits in, suddenly it's the injuries. You can do that, I will not be. The Celts had enough to beat the Jazz even without Hayward and Jaylen, but they played like shit. Well I shouldn't say that, they played well for like 9 minutes in the first quarter. From that moment on? Complete dogshit. Now maybe you're like me and are more of a visual learner. This is what things looked like 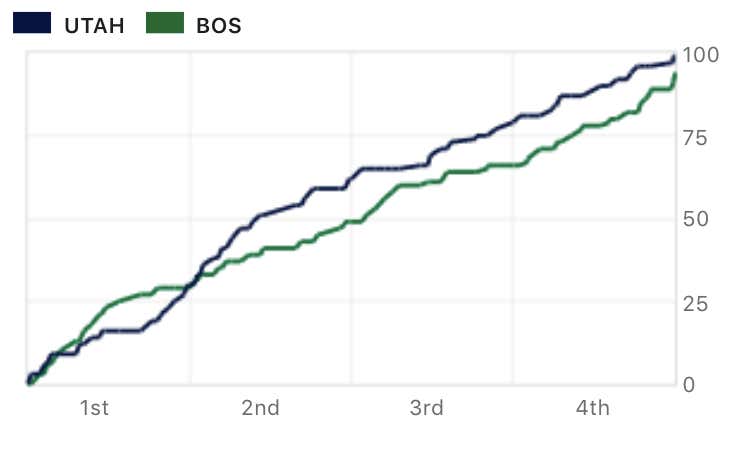 The Celts tied the game with about 11 minutes left in the second quarter and then never even got close to tying it the rest of the night. That's pathetic and I don't care who was available. Last time I checked they had 3.5 starters active (I consider Smart a .5 starter) playing at home. That should be enough considering two of those starters were All Stars.

Instead, it was another home loss that has become the norm as of late. Now 3 losses at home in a row the Celts have dropped 3 of their last 4 overall and had at least a 10+ lead in 3 of them. This is NOT the time of the year to be blowing double digit leads at home. Not when TOR is going to just keep on winning. Every time this team does this is makes the 2 seed harder and harder, and as we sit here this morning the gap is now 2 full games. Now remember, they do play TOR twice so there is still a ton to be worked out, but considering it was down to .5 games and the Celts immediately started shitting the bed isn't all that great.

Good new is the schedule only gets harder, so unless this team figures their shit out and stops missing every shot they take, could be a tough 4 game stretch coming up. With that said, let's dive in.

- Tough ending for the birthday boy despite his 29 points

We knew heading into the game that when you combine a shorthanded roster with it being Marcus Smart's birthday, the dude was going to let it fly and boy did he. It didn't exactly work out with a 9-23 (6-15), and you can love and trust Marcus with the best of em but 15 threes might be a little too much. Some of them weren't his fault, he got the ball with 2 seconds on the shot clock on multiple occasions so he had to let it fly, but it's starting to feel like Marcus is relying way too much on his outside shot as of late. I feel like when he's scoring 20+ points it's usually a bad sign for the final score, so why am I putting him in the good section? This

Accountability is important. No spin, no excuses, the effort was shit and everyone knew it. Brad can say what he wants, but Smart will always tell you how it is, good or bad. As long as he is taking responsibility for his role in that shit effort this is exactly what I want to see from the leader of my favorite team.

- It's probably not a great sign when the only other real positive from this game were the Daniel Theis seals. You know what I'm talking about

Am I reaching looking for anything positive to lift my spirits? Yup. But that doesn't mean this move from Theis doesn't rule. He's mastered it to the point where other teams are starting to copy the move. It opens up points for the wings on multiple occasions every night and is a huge part of this offense. I don't know who finally taught him how to pull this off or who pointed it out to him to start trying, but that person deserves a beer.

Theis finished with 12/9/3 with a block on 5-7 shooting, continuing his very strong play at the center spot. At least we have that

- If you are someone who doesn't love Perk on the broadcast, I'm not sure I want you reading this blog. I had some people tell me they didn't like him during his guest appearance against last night and honestly I cannot understand that take. He's fantastic. Maybe part of that is some 2008 love, but also the other part is my ears and brain. They know greatness when they hear it and this my friend was greatness

Not knowing the NBA actually tracks deflections as a real stat, trying to explain making it rain to Gorman, the stories, it's all amazing. I've said it once and I'll say it again, I need more Perk in my life. The accent, the cadence, the willingness to say whatever the fuck he wants, I need it.

- A lot will be made of the bench, and we'll get to them, but let's not let the starters off the hook so easily. Not sure what any buyout guy is going to do when your big guns miss almost every shot they take.

Those three combined to shoot 35% and honestly it felt worse than that. Maybe that's because in the second half they went a combined 9-36. That's a cool 25%. You aren't beating any team in the league when 60% of your starting lineup take the majority of the second half shots and don't make any of them. This isn't me saying the bench was good, it was beyond pathetic, but the starters were an issue as well and that's the annoying part.

- The Jazz closed the first quarter on an 11-2 run and the Celts never punched back. It was 2018 all over again with that "woe is me" mentality. Again a point guard was carving them up and instead of responding they panicked, played terrible defense paired with poor shot selection on offense and things ballooned. Did they not know the Jazz were the #1 three point shooting team in the league? I only ask because the way the defended the perimeter in that second quarter was pathetic. Utah finished 8-11 from deep in the quarter which ultimately gave them all the separation they needed, and they finished with 17 for the game. Another instance where not guarding the three point line ultimately led to a loss. That was supposed to be a strength of this team and yet this was another opponent who killed them from deep. Figure it the fuck out.

- A prayer Smart three at the buzzer prevented this from being the worst offensive night of the season. Just 37/27% splits as a team. At home.

That was so clearly a block, what sucks is because they blew the whistle before the Celts had possession it was a jump ball after they won the challenge that this should NOT have been a goaltend. Well they lost the tip and gave up a bucket anyway. So, instead of a potential momentum changing play they gave up more points. That rule is stupid. If you win a challenge like that you should get the ball.

But then there was also this

- Alright, let's get to the most brutal part of this game. The bench. Even though in real life 2 of the 5 starters were actual bench players, if this team is never going to be healthy then the second unit we saw last night is the second unit we have to accept will be the norm. No bullshit, this may have been the worst we've ever seen that group. I mean look at this

That is just so bad on every level. Kanter came in and was like a -7 in legit 1 minute of play. Wanamaker started a -12 in just 3 minutes and that ballooned to at one point being a -28. Grant missed all three of his wide open threes that very well could have swung the momentum. How can you have those type of struggles and not just give Romeo more minutes just to see if he can give you anything offensively? You knew it was bad when Wanamaker airballed a 3ft layup, then when the Celts were trying to make one last push airballed back to back threes in the final moments. I usually think the hate on Wanamaker is a little over the top, but even I can't sit here and tell you last night wasn't a complete disaster. This blog has always been about being honest with what we are seeing and that performance last night might have been his worst as a Celtic. If he's not going to help you offensively he HAS to show up on the defensive end, which obviously did not happen.

You compare that to the UTA bench who actually was the difference in this game, and that's not how it's supposed to work. My whole life I was told that your role players play well at home and struggle on the road. Well then what the hell happened.

- Mike Conley was the latest guard to have his way with this defense, his 6 3PM were the most he's made in any game this season which is very much on brand for this defense who seems to always give up random season/career highs like this. You look at the three guys who spent the most time on Conley (Kemba/Tatum/Theis) and Conley shot a combined 6-7 against them. That simply cannot happen. Then it was Jordan Clarkson's turn and he lit up Kemba and Grant.

If this team is going to go on any sort of run in the postseason, they need their guards to start defending. Everyone from Smart to Kemba to Jaylen to Wanamaker they've all been ass defensively and it's costing them games.

- Another questionable Brad rotation game. Even if his options were limited due to injury, he sat Tatum basically the entire second quarter while things started to get away. That's not exactly smart considering this team could not score. Rumor has it Tatum is a player with a little scoring ability, might have wanted to stop the bleeding before the 2 minute mark.

- The Celts cut the deficit to 5 in the early stages of the third, then didn't score again. They finished with just 17 points in the third quarter on 24/18% shooting. 24/18%!!!!! How is that even remotely possible.

We'll see how this team responds against OKC, we know Jaylen is out and hopefully Hayward is back because it should be pretty clear after last night how important Hayward is to this offense. We usually see this team bounce back and play well after frustrating losses, and they need to figure out a way to stop dropping these games at home. Toronto isn't slowing down, the Heat are starting to get a little feisty, and we're at the point of the season where pretty much any sort of skid can have massive seeding implications which ultimately could help determine how your playoff run goes. It certainly can't look much worse offensively than what we just witnessed, so at least there's that.