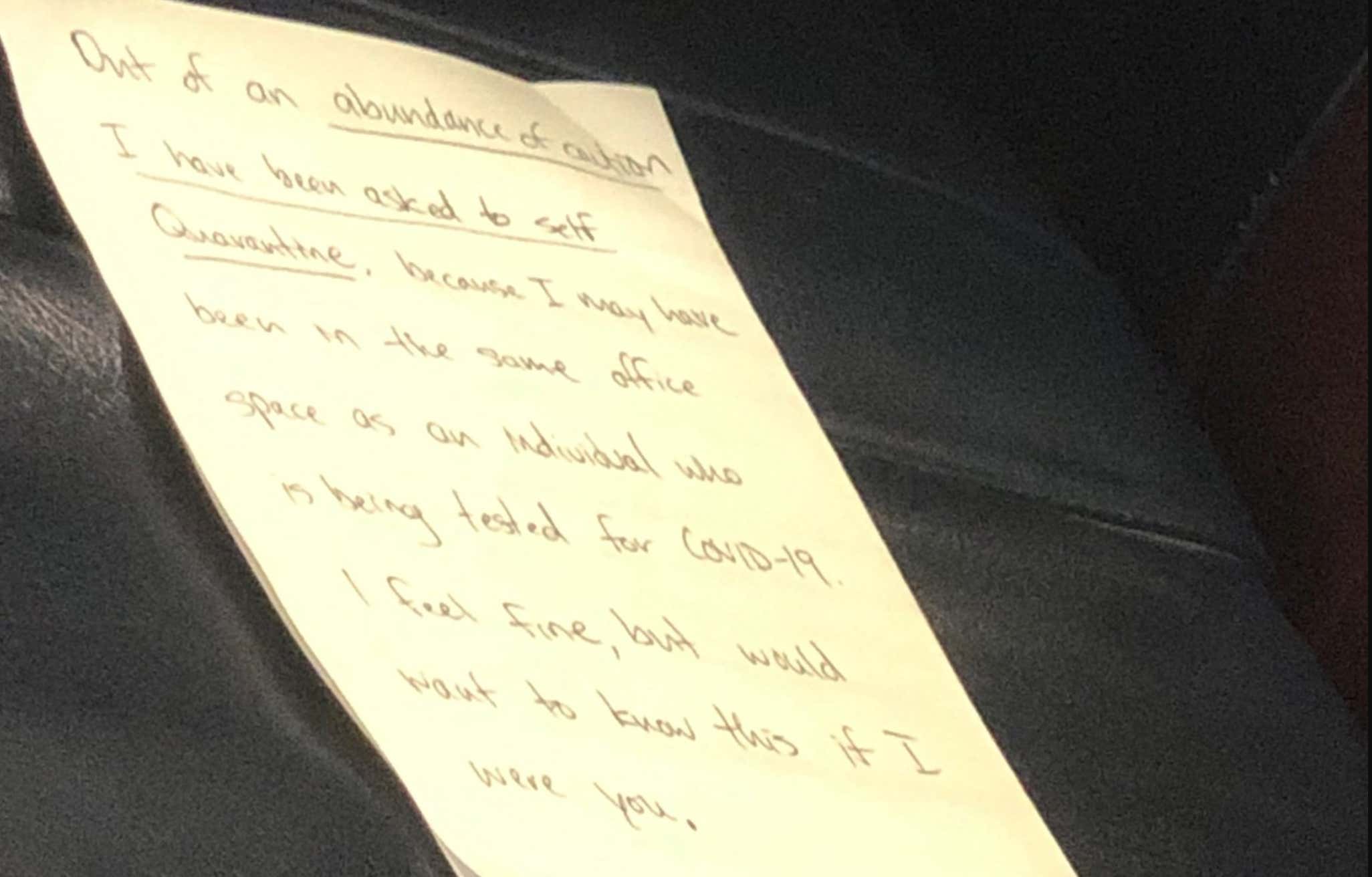 "Out of an abundance of action, I have been asked to self quarantine, because I may have been in the same office space as an individual who is being tested for Covid19. I feel fine, but would want to know this if I were you."

I cant decide whether this guy is an asshole, a genius, or some combination of both. On the one hand, a crowded ass Metro North train home can be absolutely brutal. If you're not familiar with Metro North, its a pretty standard commuter rail that has rows of 2 seat and 3 seat benches. And at the end of each car there are 4 seaters, and 5 seaters facing each other. And there are kind of unspoken rules for these different seating arrangements. For example, a 5 seater really only should hold 3 people: 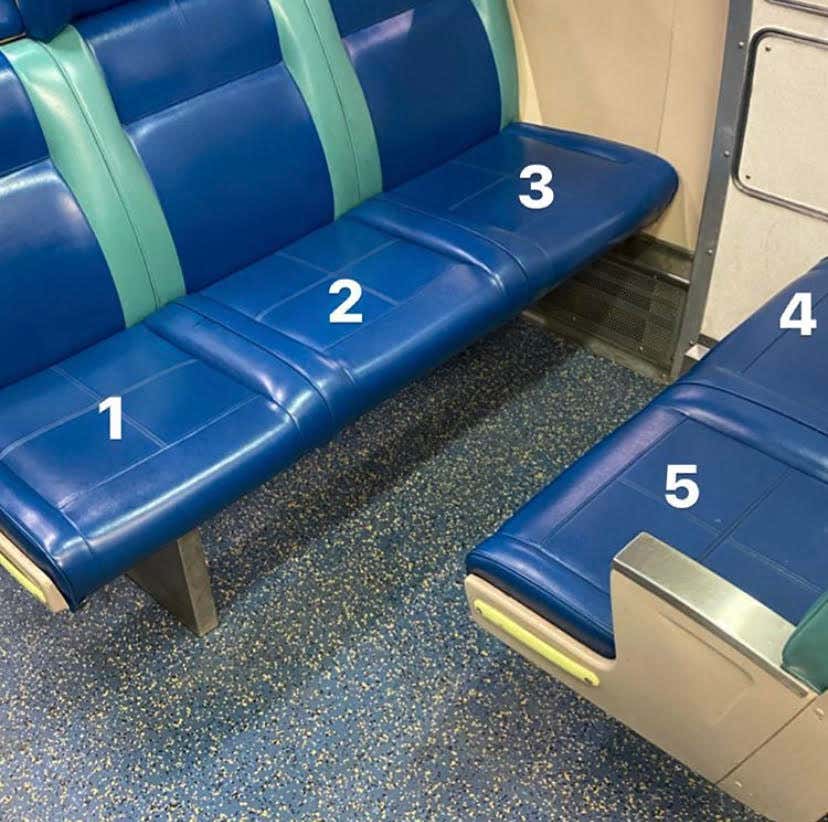 The Unwritten Rules of Metro North, and really just standard social behavior, says that people should sit in 1, 3 and 5. In order to maintain personal space and to avoid awkward knee knocking, you gotta leave space. Nothing worse than whether you dont know whether to put your legs close together and go in between the other person's legs, or do you open wide and let their knees enter your airspace. Just awkward for everyone involved. So you leave some extra space so everyone is happy, like this cheerful gentleman: 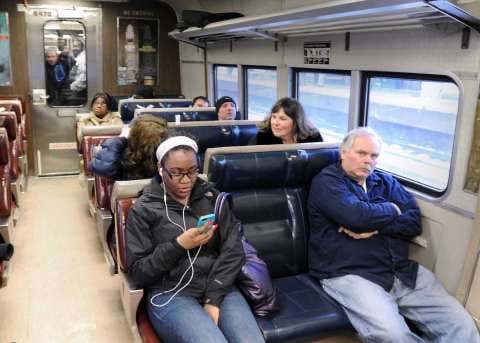 See that look that says "I'm about to murder you with my bare hands?" Now imagine if that guy didnt have leg room because of someone who doesnt understand social cues on the commute. He'd kill everyone on board. The 15:17 to Paris would be a delight compared to that dude getting his knees knocked.

So anyway, back to the Metro North set up. On a 3 seater, you're very obviously supposed to leave one seat in between so 2 people can sit comfortably: 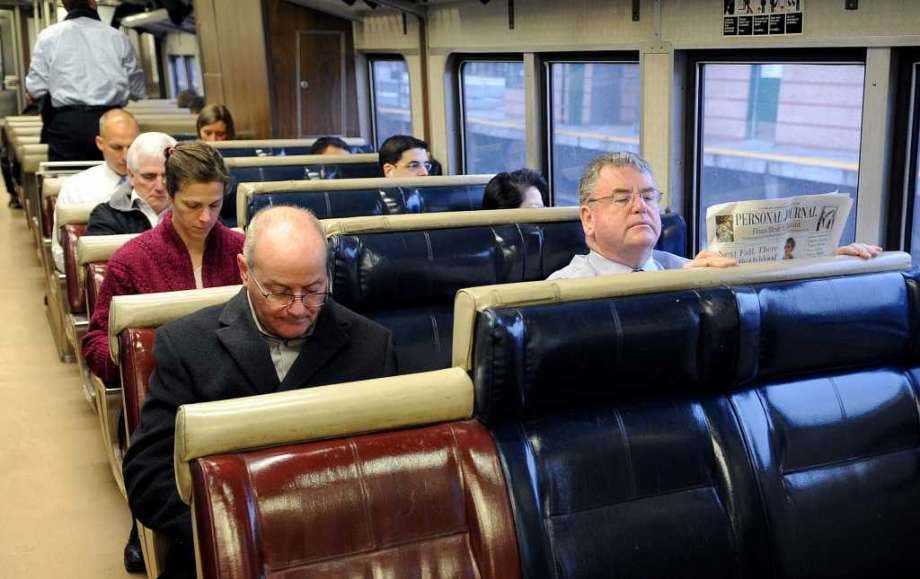 But when its rush hour and people are eager to get home and have a 50 minute ride and they dont want to stand the whole way, they jam their lazy asses into that middle seat and sit bitch, ruining the whole fucking bench for everybody else. They walk up to you as you sit on the aisle and they do that awkward, sheepish point to the middle seat and thats your cue to let them get in there even though you know everyones thighs are gonna be touching. They are fully away both people are going to LOATHE them for the train ride, and they just don't care. Just awful.

So I'm giving this Metro North Etiquette Lesson in order to say, long story short, I kinda respect this dude's hustle. A fake ass doctor's note to snake yourself a whole Metro North bench. Out here on these train tracks, in this godforsaken city, when youre on your commute grind, its every man for himself. Alls fair in love, war, and NYC commutes. People fight and scrap and claw to keep their personal space during rush hour. Its like Lord of the fucking Flies and the rules - written, and unwritten - go right out the window during extenuating circumstances. That could mean anything from extreme weather to global pandemic hysteria. This dude saw an opportunity to get a comfy, spacious commute to himself thanks to societal panic and he really capitalized. There's an old banking saying "When there's blood in the streets, its the time to buy and/or fake doctor notes to convince people to let you sit alone on the train." Can't knock the hustle.

But at the end of the day, I can, in fact, knock this hustle. This guy is an absolute cocksucker. Simply starting with a hand written note. You know how I feel about hand written notes. But even the term "abundance of action." Or the hard underline. How about the notion that sitting one row away from other people is an effective "self quarantine?" Or the fact that his coworker doesnt even have confirmation he actually has Corona virus, hes just getting tested. Or referring to it as COVID19 like a real pretentious fuck. And last but not least, the condescending finale basically saying "I mean I guess you can sit here, but I'm gonna judge you as a reckless and unintelligent person if you do so." All of it is just a masterclass on how to sound like a total fucking prick.

Final answer...judge's ruling...he's well within his rights to try to capitalize on Corona virus with a fake doctors note to quarantine himself into a comfortable commute. But I am also well within my rights to intentionally seek him out and sit next to him on purpose. Theres like a 0.01% chance he actually has Corona virus and hes just scamming, but even if this man has a confirmed case of Covid19, you better believe my petty ass would sit right on his fucking lap in order to ruin his plot. I'd for sure risk getting a super flu if it means that I get to ruin your hustle that you thought was oh-so-smart. This dude thought he unlocked the Konami Code of Metro North, and he aint getting away with that on my watch. Like fucking Rosa Parks, I'm going to take a stand by sitting. In the name of all those Asian people who ate bats for dinner and died from this disease...in the name of all the white trash hillbillies stuck on cruise ships...all the college kids studying abroad quarantined overseas...I'm not letting some fake doctor's note take up valuable commute real estate. Move over, pal. Me and you are gonna share this bench and a lil Corona Virus. Thanks for the heads up though.

PS - I bet this same dude who's writing notes and self quarantining would throw his tongue RIGHT in the ass crack of any chick who showed him attention at the bar. As would all of us. Hysteria and germs and fearing for your life only goes as far as the nearest piece of ass. 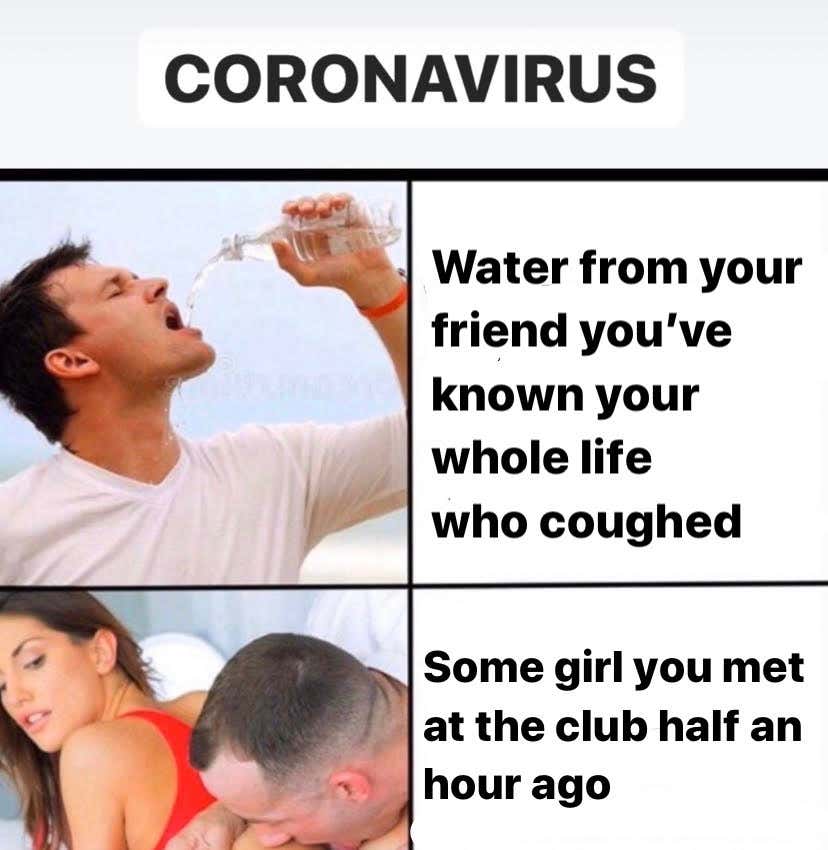