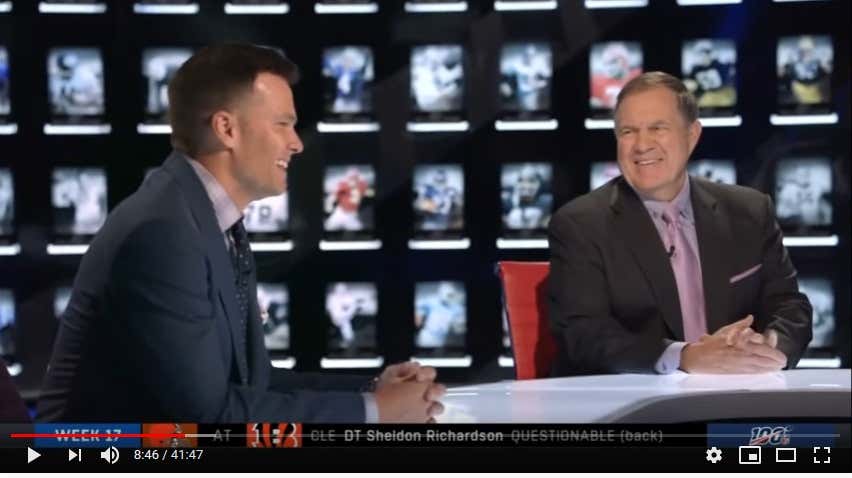 It wasn’t particularly productive, a source told me.

How long they talked and whether they got into discussions about money, length of term or any contract details isn’t known. Belichick, according to the source, was all business.

The impression drawn was that Belichick spoke as if Brady was “still under contract.”

Productive, schmoductive. I know this is report is going to be the cause of all sorts of sturm und drang over the next 24 hours or so in New England. From the Cape and Islands to Lake Champlain, from the northern tip of Maine to that Romulan Neutral Zone that runs down the middle of Connecticut separating Giants fans from civilization. But to me, it's all about those first two words.

The rest of it is just detail. Nuance. If you're in Nashville or Vegas or San Fran or any of the other markets that have all their hopes pinned on signing a 43-year-old quarterback, those words are an alarm warning you to get to the Panic Room. There are two weeks to go and negotiations have begun. Making the odds you're facing a future of Ryan Tannehill or Andy Dalton that much more likely.

So it wasn't "productive." So Belichick was "all business" and talked like Brady is "still under contract." I wouldn't have it any other way. It's Bill being Bill. And it would be ludicrous for anyone to think he's going to conduct himself any other way after all these years. In fact, it would be unsettling. If anyone on Brady's side of the negotiations expected him to open up talks by emoting over how much this means to him as a human being or gushing about all their shared experiences like the husband in a Jared's ad, they better think again.

And if having him bare his soul to reassure them how many feelings he feels is the price of keeping their client in Foxboro, then they haven't been paying attention for 20 years and might as well get Mike Vrabel or John Lynch on the line right now. Belichick being All Business Bill is what's kept the banners dropping all these years. So why would we ever expect that to change?

As far as the slow pace of talks so far, that's how diplomacy works. You don't get it all done in one phone call. The US withdrawal from Vietnam began with weeks worth of debate about the shape of the negotiating table. We just signed a treaty with the Taliban after 18 1/2 years, and dozens of Afghan troops have been attacked since peace was declared. In the long run, all history remembers is that a deal got done. Not how the talks went. Not how long they took. And for sure no one ever cares about the feelings of the people sitting across from each other as the papers get signed.

This is very good news for Pats fans, and very bad for the #Braxit crowd.