I was out. The Hawks were done. They sold at the deadline. The ship had sailed. I was okay with it. I was moving on. I started doing the thing where I just watch other teams so I can enjoy watching hockey without the emotional rollercoasters. I was happy. Then I went to Canada for the Barstool Pond Hockey Tournament and saw that the Hawks got two points against the Lightning. "That was nice", I thought. The leadership core wasn't letting the team mail in the season. Still a good culture. Then they beat Joel Quenneville and a Panthers team that needed two points at home. Then the Hawks shit-pumped the Ducks and now...I am looking at the schedule, other stat nerds math, and I've decided...I can't quite quit. I am not getting my hopes up, but this next stretch of 5 games will be enough to get my heart 100% invested and ready to be punted to the moon for like the 37th time this year. Look at it

There are points on the board there. Edmonton is having a good year, but the Hawks are certainly capable of getting two points at home there. Then Detroit, SJ, and Ottawa are among the worst teams in the NHL. That should be 6 points. STL is obviously a wagon, but the Hawks have given them a run for their money the last two times out. The way Corey Crawford is going right now there's no reason to think he can't steal a game. If the Hawks come out of this stretch with 8 points they will ABSOLUTELY be in the mix for a playoff spot. And then the next stretch

Two against Minnesota and one against Nashville. 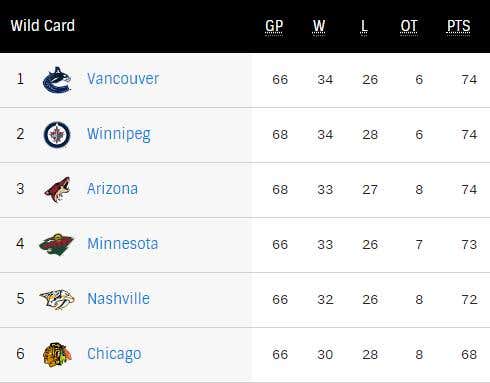 A chance to climb against teams ahead of you...

I am not getting my hopes up. I am just cautiously dipping my toes in the waters. Somehow, some way, the Blackhawks aren't completely dead. Now, that's mostly because the West has St Louis, Colorado, and Vegas, then Dallas, then roughly 10 feet of dogshit, and then the Hawks. That's not enough to keep them out of the pile of shit. One shitty team will eventually make the playoffs and per data at the Athletic there's a 10% chance. That means we still have meaningful hockey for maybe another week, but at least for one more night. The UC better be rocking tonight.