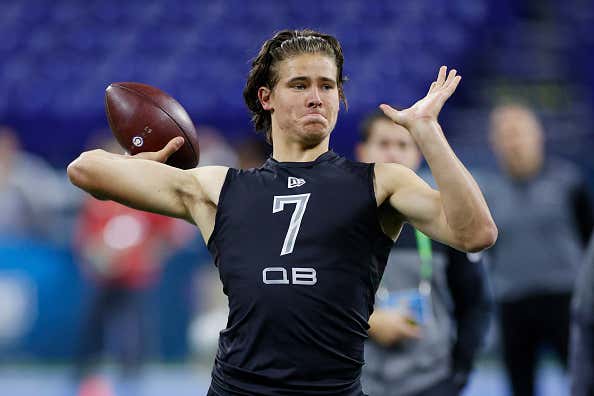 Every year someone will message me asking if I plan on doing my own mock and I politely decline. Because I don't claim to understand how, say, Tampa Bay or the Giants or Arizona think and function. I don't pretend to know their system fits.The Belichick Whisperer is a specialist. I know what the Patriots look for. I understand what their "type" is at various positions. I used to know Al Davis would take the guy with the best 40 time and Matt Millen would take a wideout. I know the Jets and Browns will pick the next great Draft Bust in the Top 10. And for the rest, I defer to the experts.

That said, mock drafts are an exercise in futility. A monument to the arrogance of man. You know that contest ESPN does every year where you get a zillion dollars if you submit a perfect March Madness bracket? That's 67 or so games. The first round is 32 picks. (And fewer whenever the league takes the Patriots' pick away.) And the mock results are the same as the brackets: No one has ever produced a perfect one. In fact, I defy anyone to show me one that got the first 10 picks right. Don't bother; you can't.

Which brings me to this one particular mock, by NFL.com's Daniel Jeremiah. I don't know if it's clickbait or based on trade rumors or a cry for help, but this is Jeremiah's pick at 23:

"It's highly doubtful Herbert makes it this far"? Highly doubtful? I've skimmed over a dozen or so different mocks in the early going, and I've yet to see one where he made it through the gauntlet of QB-desperate teams in the Top 10 like Cincinnati, Miami, the Chargers and possibly Carolina. The two other mock drafts on NFL.com, by Bucky Brooks and Lance Zeirlein, have Herbert going to the Chargers at No. 6. As does just about everybody.

And yet ... I don't know that we can rule it out. For a few reasons. Not the least of which is that we've seen mortal lock Top 10 quarterbacks drop before. Most famously Aaron Rodgers from an expected Top 5 all the way to 24. Brady Quinn to 22. There is a flood of QB free agent talent hitting the market the likes of which the league has never seen. It's plausible that teams with immediate needs will fill them that way and save the developmental projects for later rounds.

Second, I can assure you the Patriots love Herbert. And they have for a couple of years now. I spoke to someone last spring with direct knowledge who told me they were conducting workouts with him last spring and if they could move on from Brady with any college prospect, it would be him. I didn't doubt the report, but didn't make much of it either because with him projected so high, it seemed like a pipe dream. Along the lines of me saying, "If things don't work out between me and the Irish Rose after 26 years, I'd like to have Gal Gadot as my franchise wife going forward."

In addition, when the 2020 prospects are ranked, regardless of position, you'll typically find Herbert listed somewhere around 20 or 21, behind the herd of freakishly athletic wideout and defensive prospects who broke the Combine with their performances. The Patriots have the desire. They have a surplus of mid-round picks. And if Herbert navigates his way through the tricky waters of those early teams, they would have the means to move up the necessary spots.

Finally, there's this, from Peter King:

FMIA: Who’d you meet at the combine who was impressive, or who you really wanted to meet?

Of all the names he could've mentioned, he goes with the coordinator of a team allegedly out of the running for him? Hmm ...

I'm not willing to go out on a limb and say I think this is happening. It's still a pipe dream. But then again, Red Boyd called Andy Dufresne's hopes of getting out of Shawshank "shitty pipe dreams." Which they turned out to be, in the literal sense. Because foreshadowing. And if it somehow were to happen, that the Patriots somehow landed their ideal successor to Brady without having to tank a season, the league would probably nullify the pick and there'd be an emergency session of congress to look into the corruption.

I'm just not ready to rule out Herbert to New England. It's a long shot, yes. But there's too much noise around this to dismiss it out of hand. And stranger things have happened. All I do know for sure is it would go a long way toward helping me adapt to my post-Brady existence, whether that begins in two weeks or two years.