He's just morphing into Bobby Knight at this point. That's all this is. He's losing his shit on the student section, he's pissing off other coaches and now he's just randomly screaming at people in a postgame win over an unranked team at home that no one can dare question him. Who cares if he failed historically last season with Zion and grossly mismanaged that roster? Who cares if he made Joey Baker burn a redshirt only to never use him? Who cares if CJ McCollum and Lehigh or Mercer come dancing in? Don't you dare question him!

Again, no one has ever doubted that K is a great coach. That's never been the argument here. His record speaks for itself. That said he's a tremendous dickhead who has avoided getting called out by anyone in the media for years when people do the same shit. The guy has been caught lying about what he says to OPPOSING players. He's a sore loser. If we all could just acknowledge these things as true we'd move on just fine.

Also you can't sit here and say 'don't criticize my players' despite them not having a consistent 3rd player and then act like this when you criticize K for things like how he uses Joey Baker and not figuring out a rotation when we turn to March. Again, it just goes back to what I said in the previous paragraph. And I know he played under Knight, but now he's just turning into his personality. 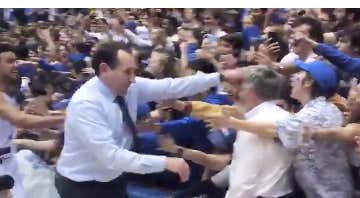