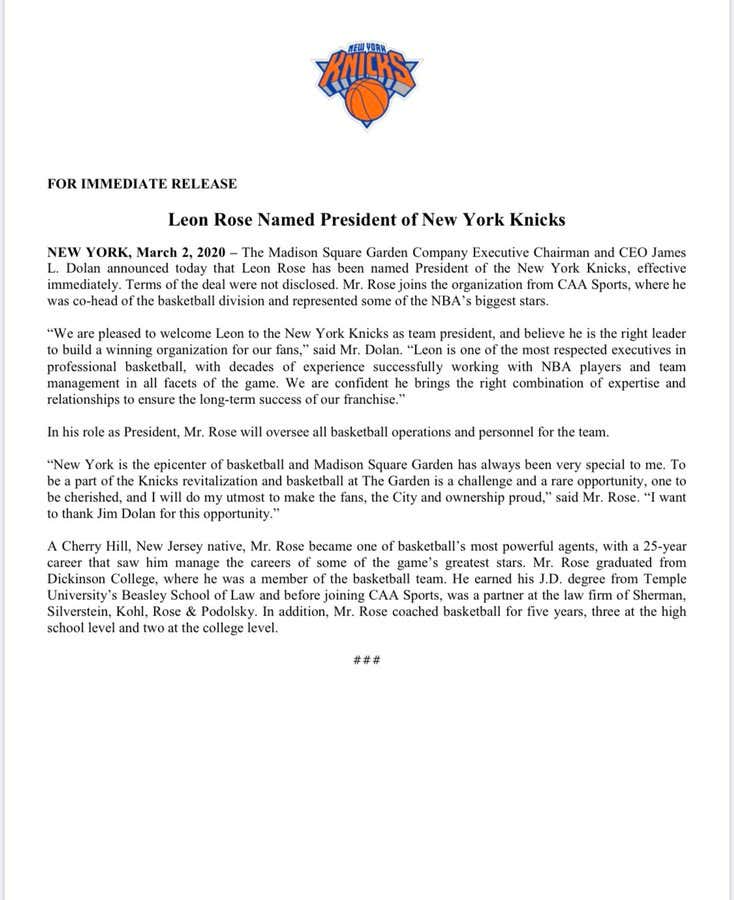 Damn it feels good to see the Knicks absolutely SMASH the Reset button after 20 years or so of varying degrees of incompetence. Granted, that button has been smashed 5+ times since James Dolan's reign of terror began. But hopefully this is the last Reset button smashing for a while. All that's left is taking the prerequisite pictures holding a basketball with Dolan followed by the media firestorm from New York reporters, right?

NOT SO FAST MY FRIEND!!!

Honestly, I have no problem with this at all. I don't need to see another guy get up in front of the New York media and take his lumps while promising Knicks fans everything will be different. I'd like the President of the Knicks not to hide from accountability if when shit hits the fan. But that day is not today, so we are going to celebrate change at MSG and hope The World's Most Famous Arena is no longer seen as a toxic dump of dysfunction for free agents, even if the Knicks acted like the Winter Mets yet again by releasing a three (3) tweet Photoshop statement from Rose.

Trust me Leon. Us idiots have watched almost nothing but garbage for the last two decades and still come back for more. Knicks fans have more patience than Wuhan as long as you have a plan that you are going to stick to, preferably one that doesn't include Tim Hardaway Jr. But we will give you a fair shake as long as you are upfront with us and don't mortgage future assets away for guys like Eddy Curry or Andrea Bargnani. Also, good call throwing your support behind Mike Miller after the rebrand guy pretty much told the world you were axing his ass no matter what a few weeks ago. Even if you have no plans of keeping Miller, backing him for now as he coaches is nice since appearances are just as important as pretty much anything else here since consistently winning has become pretty much an unobtainable dream.

One last note, I am still more than fine that Worldwide Wes isn't coming with Rose to the Knicks. You can't have your Master of Whispers on the payroll in Adam Silver's NBA. That's how you get hit with tampering fines. Day 1 Game of Thrones stuff.