1In collaboration with the Sportsecyclopedia.com 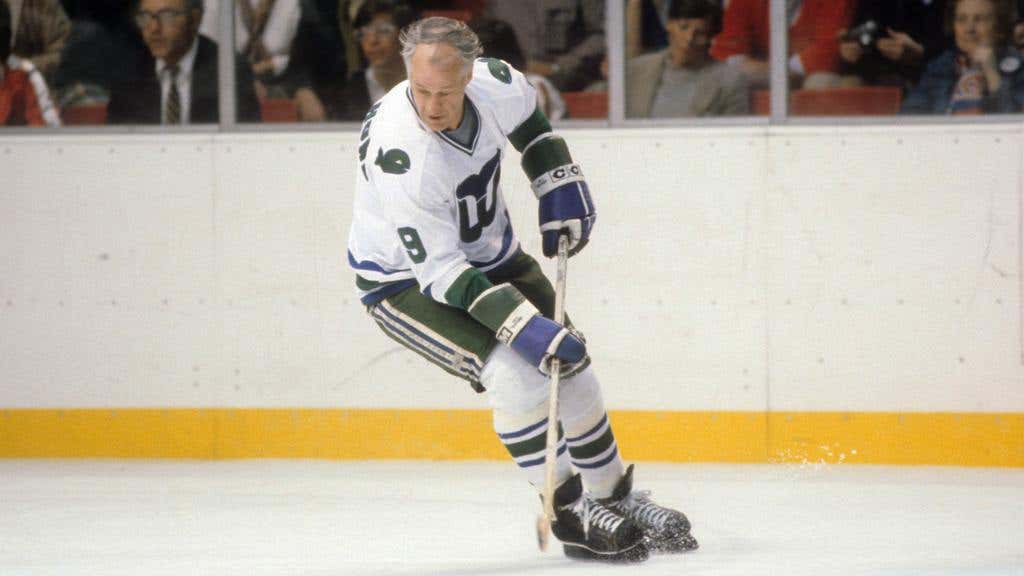 Gordie Howe, playing in his final season with the Hartford Whalers, sets one last milestone, becoming the first player to reach 800 goals in NHL history. Howe’s goal comes in the third period as the Whalers leap over the St. Louis Blues 3-0 at the Hartford Civic Center. Gordie Howe would score just once more before calling it a career with a record 801 goals.

Gordie Howe was born on March 31, 1928 in Floral, Saskatchewan. Howe was bigger and stronger than most kids his age, as he stood six-feet tall by the time he was 16. Working alongside his father in construction, Gordie Howe quit school in 1944 to pursue a career in hockey. It would not take long for the imposing teenager from Saskatoon to catch the eye of NHL scouts as he signed to play for the Detroit Red Wings’ junior team in Windsor. Two years later, Howe made his NHL debut with the Red Wings at the age of 18.

Gordie Howe quickly became an NHL star, making his first All-Star team in 1948. He would play in a total of 23 All-Star Games. In 1951, Howe won his first scoring title, a year later he won his first Hart Trophy, given to the NHL’s MVP. More importantly, he helped the Detroit Red Wings become the most successful NHL team based in the United States, as they won four Stanley Cups Championship in six years. When his career was over, Gordie Howe would claim five scoring titles and five Hart Trophies as he became the NHL’s top star of the 1950s.

Durable and strong, Gordie Howe rarely missed a game with an injury as he became both the NHL’s All-Time leader, in goals, assists, and points. He was the first player in NHL with 600 goals and the first with 700 before announcing his retirement in 1971. In total, Gordie Howe spent 25 years with Detroit, scoring 786 goals, with 1,023 assists and 1,809 points.

Two years after retiring from the NHL and being inducted into the Hockey Hall of Fame, Gordie Howe returned to the ice to play in the upstart World Hockey Association. Mr. Hockey, as he was known, received an offer, he could not refuse he had a chance to play with sons Mark and Marty Howe with the Houston Aeros. Gordie Howe won the WHA MVP in his first season as he and his sons led the Aeros to back-to-back AVCO Cup Championships. After four years in Houston, Gordie and sons signed to play with the WHA’s New England Whalers.

Gordie Howe would play six years alongside his sons in the WHA, scoring an additional 174 goals, and he reached the age of 50 with no signs of slowing down. When the WHA folded in 1979, the Whalers were one of four teams invited to join the NHL, becoming the Hartford Whalers. This would bring Gordie back to the NHL, nine years after his final game with the Red Wings, once again playing with Mark and Marty.

Gordie Howe would get an assist in the NHL All-Star Game, as he made his 23rd and final appearance against Wayne Gretzky made his first appearance. The game was played in Detroit, with Howe receiving the loudest cheers of any of the stars.  In his final NHL season, Gordie Howe would score 15 goals, finishing his career with 801 goals, which remained the record until 1994 when it was topped by Gretzky. Howe’s final goal came in his last regular-season game on April 6th, with the Whalers beating the Red Wings 5-3 in Hartford.

Naturally, after his final goal, Brass Bonanza was played.