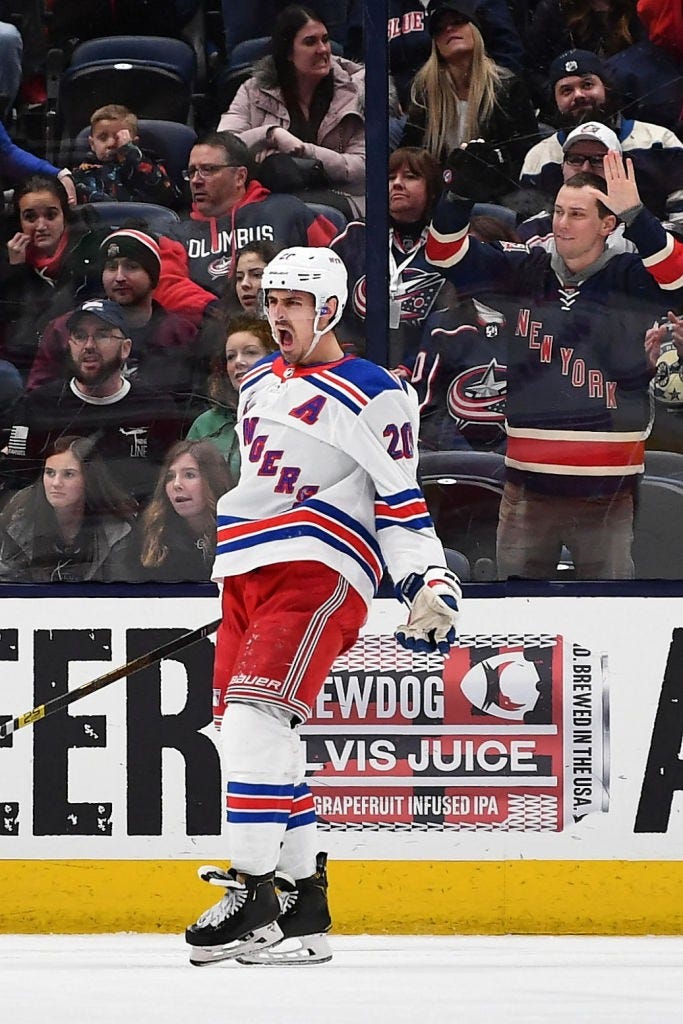 What a wild deadline day in Rangerstown.

First, awful news straight out of left field. It actually hit my DMs around 9am but I didn't believe it. Turns out I apparently have a source now. Lundqvist's heir apparent Igor Shesterkin, along with Pavel Buchnevich, were in a car accident last night in Brooklyn. Buch was shaken up but didn't suffer any significant injuries. JD labeled him "day-to-day" at a presser this morning. As for Shesty, fractured ribs are gonna sideline him for a couple weeks at minimum. This Rangers squad has improved all over the ice - but having a rookie backstop step in to win 9 of his first 10 with 2.23/.940 peripherals is the kinda thing that expedites a rebuild real fast. Any playoff expectations should be tempered while he heals & there's no incentive to rush the kid back. If Hank & Georgie keep the squad rolling then let them go as long as they can. If not, all the more reason to keep Shesty shelved.

Gotta think the rebuild had something to do with the decision to lock up Chris Kreider to a 7-year/$6.5M per deal. Now, in terms of estimated market value (7/$7 were the numbers kicked around for as long as CK was rumored to be on the block) the Rangers got a bit of a cap bargain. I just thought Kreider served as their last significant trade chip to put a bow on the "rebuild" & begin playing for the "now". A first-rounder in a deep 2020 draft class paired with a solid NHL-ready prospect seemed like a reasonable return unless Kreider's camp were willing to make significant sacrifices in both term & money to fit the long-term plan. Turns out they really didn't have to give in much at all.

Now let me say that I love Kreids. I love what he brings to this team with such a unique skillset. He's a great teammate and a freak athlete who will undoubtedly remain in tip-top shape (barring injury - which he's avoided throughout his career outside of a freak blood clot) for the duration of this deal. Still, he'll be 29 when it kicks in. The game is getting younger and younger. Best case scenario, the Rangers are legit contenders in a couple years and it's fair to say he'll be past his prime when that time comes. There's obvious chemistry with Zibanejad - but for anyone using superstar chemistry a reason to keep Kreider around, then you better be saying the same for Ryan Strome with Panarin. Both duos are having career years together and have been key cogs in a reliable to-six that's led one of the league's best offenses. Can't deny that.

Kreider has also tallied 28 in his last two healthy seasons while on his way to breaking the 30 threshold for the first time this year. Maybe he's got a couple more 30-goal seasons on the horizon too. Still, the timing just doesn't line up for the rest of the Rangers trajectory unless we're banking on him to remain that guy through his early 30's. Certainly not impossible but all you have to do is look at the goal leaders & see there's not many 30-somethings on that list who aren't HOF-caliber players. Kreids is certainly not that level. So can Kreider be TJ Oshie in terms of production 4-5 years from now? If so then this will end up a solid deal regardless of how the last year or two go. Most long-term UFA deals come with a bad year or two attached so whatever. If a drop-off happens earlier though, which is more likely than not, well…that's what I wanted to avoid all along with the safer play of moving on.

Lastly - look at the rest of the Metro. Already the best division in hockey and everyone they're chasing is making "now" moves. I thought this was the perfect situation to zig while the rest of the division zags. Let them peak now while the youngest team in hockey develops into true contenders in a couple more years. Make one more splash to get younger assets & bide time for the inevitable takeover. When they feel their Cup window has re-opened, go free agent shopping for a player in his prime. There's $18.5M coming off the books after next season and the Rangers always get their guy. Turns out their guy is Kreider though, so here's to hoping the beast we've seen score at a 29-per-82 pace since 2016-17 stays that way for at least the next four seasons as well.

And in a last-minute deal, Gorton shipped out Brady Skjei to Carolina for their first-round pick. This is a fantastic move that alleviates the monetary sting of the Kreider extension. I'm really sad to see Brady go. I loved the kid at the start & I think a lot of fans were ready to crown him the inevitable McD replacement. After paying it forward though with a six-year $31.5M deal, despite ample opportunity, he just never panned out as a reliable top-pair guy. He'll be 26 next month and with an influx of young back-end talent it made sense to move on. Acquiring a first-rounder from a team that's currently on the playoff bubble is a solid return, but more importantly clearing his $5.25M cap hit means there will be money after all to lock up a younger, more explosive Tony D this summer.

With Skjei gone it'll be interesting to see how the defense plays out for the immediate future. I'm talking pre-K'Andre, Nils, etc. DeAngelo has left-side experience. Will he slide over & join Trouba or will DQ raise hell and put Staal there? Will a struggling Hajek get another look or is it showtime for Yegor Rykov? If neither are ready to step up they can always drop Brendan Smith back too. Lotta options for now but big picture, this move essentially solidifies Trouba, Tony, Fox & Lindgren as four of their six back end mainstays for quite some time. If the hype is real on even half their D prospects to round out their blueline in front of Shesterkin, this Blueshirts squad is gonna be a real problem for the rest of the league & I couldn't be more excited.