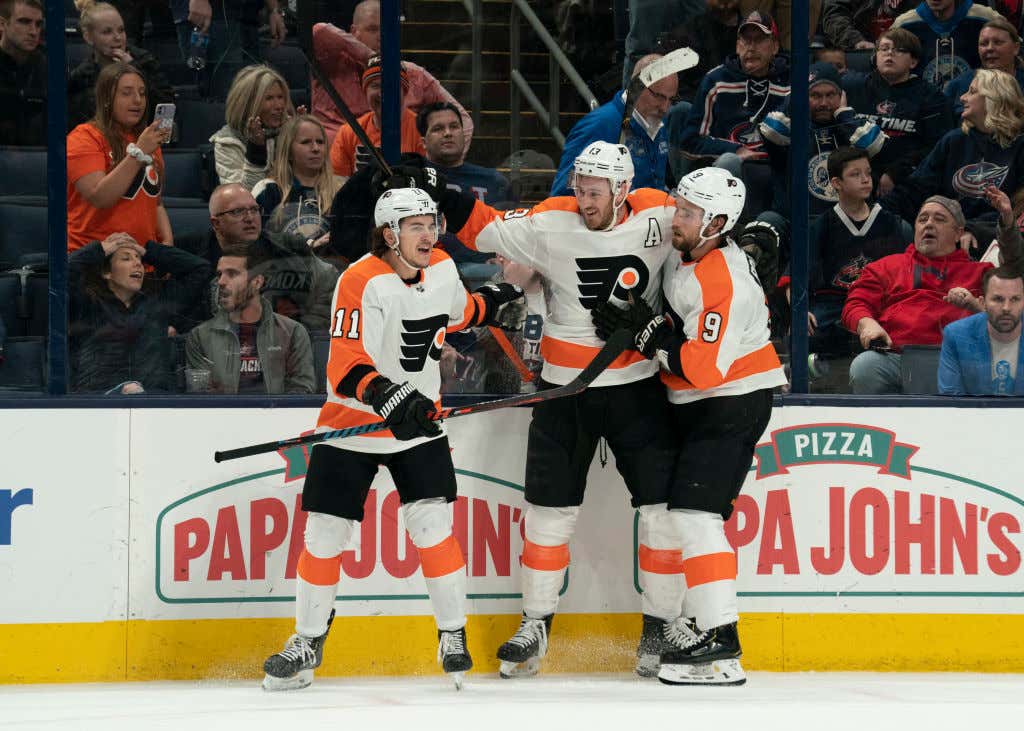 I know the Stanley Cup Playoffs don't start for another couple of months but the Philadelphia Flyers men's professional ice hockey team simply does not give a shit. They're playing playoff hockey right now and there ain't dick you can do about it.

It all started when this team returned back home after spending the first few days of the New Year on west coast roadie. They looked pretty abysmal out West but that's whatever at this point. Because since getting back home not only has this team not lost twice in a row at any point, but they're stringing together some greasy wins and starting to separate themselves from the pack fighting for those wild card spots. They've been getting production out of the guys who get the big bucks to get it done, like the Captain here continuing to own the entire Blue Jackets organization.

Holy fuck did G get ahold of that one. That sound of the pipe and in deserves to be on the Billboard Top 40. 7-game point streak for the Captain right now. Plenty of haters and plenty of doubters out there have ragged on Giroux so far this season for lacking in the production department and Giroux has quickly outted them all for being donkey-brained bozos.

Then this team is also getting production from the 4th line and let me tell you something real quick--I think Nic Aube-Kubel and Tyler Pitlick might just be my favorite guys on this team. The motor on these kids? Sheesh.

Pitlick just goes and goes and goes. NAK is such a little prick out there and it's a glorious thing to see. This is the type of 4th line play you need in the playoffs. Give them somewhere around 8-10 minutes per game in the playoffs and they bring the juice. That's how you end up winning an extra 16 games.

They're getting the goaltending when they need it the most.

I know that Elliott looked reallllll shaky to start the game but once he settled in, he gave this team every chance they needed to come back from being down 3-1. I'll take a shaky start over a shaky third period in 82 out of 82 games. Tough start on the road, start to settle yourself in, give the boys a chance to come back, and then once they get themselves going? This team has 4 lines that can all come at you in waves. And then, of course, it always helps when you have The Best One on your roster.

You just have to love the way this team has been playing lately. It's night and day from last year's Flyers team. There's never any quit. They're a bunch of pricks out there and they back up their mouths by stuffing pucks in the back of the net. I can guarantee you right now that there's no team in the league who would enjoy playing a 7-game series against these assholes. They piss you off, they take you out of your game, and then before you know it you have The Best One throwing the dagger in your chest while Travis Konecny proceeds to piss on the ashes.

The only thing that wasn't necessarily great to see last night (besides that start from Elliott) was Travis Sanheim having a little rough go at it with Nathan Gerbe.

To be fair, Gerbe is 5'4" and like 40 years old so I'm pretty sure it would have been some sort of hate crime for Sanheim to actually go after him in a fight. But still. Between the wild height and age disparity here, Sanheim never had a chance.

Oh well. Such is life and the 2 points right now are more important than Tall Travis getting dummied by a little person.

Coming for that ass, Ovi.